Whatever you do in Cinema 4D—scene building, motion graphics, animation—you’ll benefit from the same features Datasmith offers for the other file types it supports. This includes:

If you’re using Datasmith for the first time, learn about how it works in the Datasmith Overview.

If you’ve used Datasmith before, and you want to know what’s special about the Cinema 4D importer, see Using Datasmith with Cinema 4D.

If you’re using Datasmith for the first time, learn about how it works in the Datasmith Overview.

If you’ve used Datasmith before, and you want to know what’s special about the IFC importer, see Using Datasmith with IFC.

To get started, simply use the new IFC Datasmith importer in the Toolbar to bring your .ifc file into your Unreal Engine Project. See Importing Datasmith Content into Unreal Engine 4.

New Collaborative Design Review Template
It’s now easier than ever to create a rich, collaborative runtime experience around your design data, thanks to the new Collab Viewer Template included only with Unreal Studio. This new Template combines the Product Viewer and Multi-User Viewer Templates available in previous releases. If you used those Templates, you’ll recognize many of the same key features of them both, rolled into one:

The Collab Viewer also adds a few new features, such as a Toolbar that switches dynamically between multiple different navigation and interaction modes: Fly, Walk, Orbit Cam, and VR.

If you’ve imported Static Meshes into the Unreal Engine from a tool that doesn’t create UV mappings, or that doesn’t give you any control over the UV mappings it creates, this tool can help you create basic UV layouts that are good enough for wrapping simple tileable textures around your object.

You can create a new UV mapping for any Static Mesh by projecting its vertices onto a plane, a box, or a cylinder:

Use the new UV > Generate UVs option in the Toolbar of the Static Mesh Editor.

Retessellate CAD Geometry
It’s now faster to find the best balance between performance and visual fidelity for each of the Assets in your Project.

If you use Datasmith to import a scene that contains parametric surfaces, or NURBS, you can now retessellate the imported geometry without reimporting it from the original scene file. You can import your whole scene with one set of tessellation options, then override selected pieces of geometry with higher or lower settings.

Because retessellating doesn’t reload the original scene file, it’s faster than selectively reimporting individual objects, and it doesn’t pick up any changes made to the geometry in the scene file since the last import.

Datasmith Improvements for 3ds Max
This release continues to improve the way Datasmith handles scenes from 3ds Max, in direct response to feedback from the community of active users. Changes include:

Datasmith Improvements for Revit
We’ve made a few improvements to the Datasmith Revit importer to make the results in Unreal Engine more consistent with the original scene.

Datasmith Improvements for Rhino
We’ve made a few improvements to the Datasmith Rhino importer to make the results in Unreal Engine more consistent with the original scene.

See also the Upgrade Notes below for other changes in behavior that affect Rhino.

VRED and Deltagen Animations
The Datasmith importer for VRED and Deltagen now brings in animations as Level Sequence Assets instead of using custom Blueprints. This brings the import results in line with all other Datasmith formats that support animations, and makes the results much easier to understand and simpler to control using the standard Unreal Engine Sequencer tool.

For more information on how Datasmith works with animations, see About the Datasmith Import Process.

Automating the construction of your Variant Sets and Variants makes the process more easily repeatable and less prone to error, and makes it possible to construct an automated pipeline for importing scene variants that you set up in other third party applications.

Smoother Playback for Level Sequences
Level Sequence Assets generated by Datasmith now have the Lock to Display Rate at Runtime setting enabled by default. This makes complex animations imported from third-party applications play back more smoothly by capping the Engine’s frame rate to the frame rate of the animation.

Improved Performance Working with Large Scenes
With every release, we continue to identify and remove performance bottlenecks that can come up when working with large scenes in Unreal Editor. This release, you should notice considerable improvements to import speed and memory requirements, Level load and save times, and general Editor responsiveness when working with Datasmith scenes that contain thousands of objects.

Upgrade Notes
If you’ve been using previous releases of Unreal Studio, there are a couple of important changes in behavior that may affect you.

I reported a showstopping WMR build bug like a day or two ago and I don’t know if that’s resolved or not… feels as if someone pushed release on 4.23 too early, because I don’t remember this from 4.21 to 4.22 either: 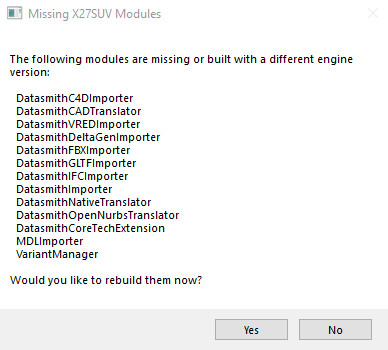 So, I’m currently locked out of my 4.23 projects, but that doesn’t really matter, because their builds can’t be launched on a WMR headset anyway.

I reported a showstopping WMR build bug like a day or two ago and I don’t know if that’s resolved or not… feels as if someone pushed release on 4.23 too early, because I don’t remember this from 4.21 to 4.22 either:

So, I’m currently locked out of my 4.23 projects, but that doesn’t really matter, because their builds can’t be launched on a WMR headset anyway.

Looks a lot like the Datasmith plugin wasnt updated as it should have on you machine. Try uninstalling the plugin only and reinstalling it again to be sure it is up to date and correctly compiled ?

Looks a lot like the Datasmith plugin wasnt updated as it should have on you machine. Try uninstalling the plugin only and reinstalling it again to be sure it is up to date and correctly compiled ?

Builds done with the WindowsMR plugin still won’t launch in VR, though (as I mentioned again here).

I’m using Cinema 4D and Datasmith and noticed that on importing a model through Melange, as instructed, my materials all appear with the same texture. When opened they are labelled as C4Dmaster, what’s this??. I tried editing one of them and once saved, that changed all the rest of them, again to the same texture.

That’s not all, when I closed this and came to re-import the melange file through datasmith, the file (which is actually there in my folder) doesn’t appear but I then have duplicate folders all over the place. Is this a bug?

I can’t help but feel you guys are moving further away from improving the Solidworks importer. Are there any plans on ever going back and getting all of the functions working: patch shading, parts disappearing, parts unsuppressing themselves in an assembly config? It would be much appreciated by the CAD community. So far I am at about 2 for 8 which is kind of irritating but it is still better than before. I know there are only 5 on the screen but the others just imported an empty object. 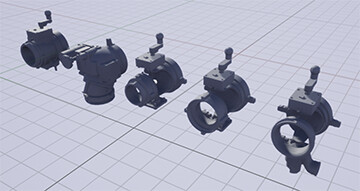 Thank you for your feedback.
We are working hard on the Solidworks importer as well as the other CAD formats, for example UE4.23 already introduced performances improvements regarding import time.
Suppressed features, as well as configuration/display states, are SW elements that are taking us a bit more time to fully support, and we’re also aware of the material issue in 4.23 that is going to be fixed with our 4.23.1 hotfix really soon.
In the mean time, if you find issues that you think should work please don’t hesitate to share the models with us so we can investigate.

I have noticed that the import time has been considerably shorter. I really wish I could share assemblies but I do not have permission to do so. I would love to contribute if you had some kind of debugging tool I would happily share logs. I can also screenshot anything you would need to see. Would that suffice?

I am experiencing issues with the collaboration viewer, both in scenes that I have created and with the default scene. After packaging and hosting a session on one machine, I am completely unable to connect from any other machine. I was previously able to use this feature nicely, with only some small bugs (vr locomotion only worked on the host computer) but now clicking the join button does absolutely nothing. I have tried with 3 machines, on various networks, ensured nothing is blocked on the firewall side, etc… and still am unable to get a session to connect with the host.

Are there new settings that need to be enabled or something else I might be missing to get this up and running again? It has been a nice part of our reviews with remote locations.

If any one could kindly help me regarding the datasmith export or import option,
recently I downloaded unreal 4.23 beta version however it dosent say beta…but unreal 4.23 properly downloaded and working…all good .
however I don’t see datasmith importer in 4.23. I tried the setting to see weathere its installed as it says installed. kindly advice please urgently.

I’ve been trying to get my head around the CollabViewer template and to get it to work with VR but having troubbles… The thing I cant get to work is when you are in the VR preview and you want to select objects using transform and Xray, it doesnt work to press any of the buttons. In the Product Viewer you used the trigger button to select the object but have tried that and the thumbstick but nothing happens. Everything works in Desktop mode so it is only in VR mode that it doesnt work.

Am I missing something super obvious here or is this a bug you are working on to fix?
Cant fint anything about this problem online either so have no idea how to fix it.

My question is, can I download Unreal Studio Beta on another drive which has 200GB for space sitting there or do I need to re-download and register etc.AGAIN.?

Many thanks in advance
Barbz