As I enjoy music and I often check some YouTube radios - some of them do not provide visible title, there’s only one background all the time and music never changes because they want to stay online 24/7

With my App you simply place music and images in respective folders and the content will be automatically updated without restart or even bringing up any Menu!

Check out the Video if you’re curious! There’s more about the App! Scroll down to see the changelog or visit my Discord to stay tuned!

Example set-ups:
(Please note that the backgrounds aren’t static - they change constantly based on your setup) 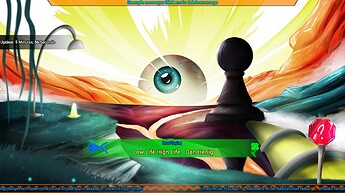 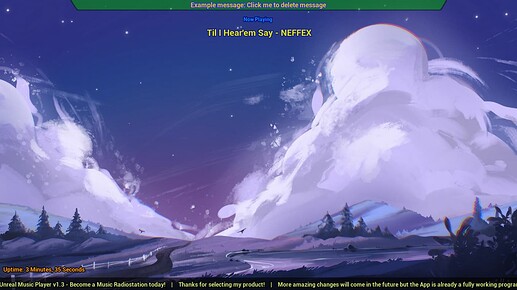 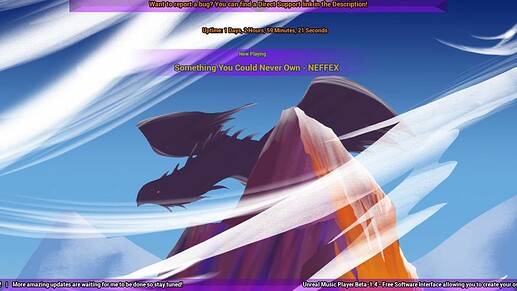 The App contains a few songs from YouTube Audio Library and backgrounds from https://wallpaperscraft.com 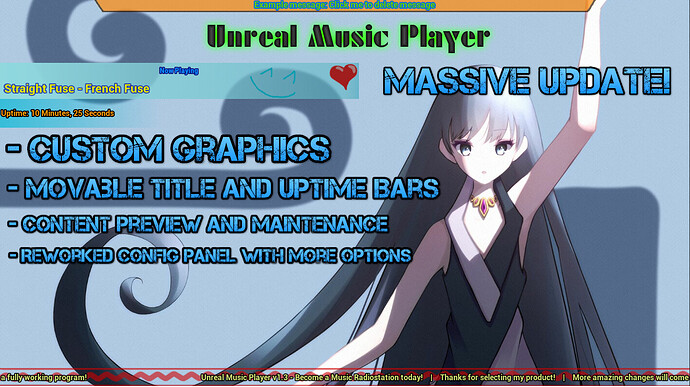 Congrats on your first release and I must say what a great idea. I constantly keep Lofi Girl playing in the background but your software might just change the game.

Do you have plans to integrate other media pieces like occasional gifs or emojis? Either way, this is a brilliant idea and I wanted to personally send a thank you message for sharing it with us here on the Unreal Engine Forums. Can’t wait to start seeing channels use this!

I recently switched to some nightcore personally but Lofi was one of the first Channels I encountered when it comes to YouTube Radio Streams and overall amazing Music related Channels!

Can you expand the idea of ‘occasional gifs and emojis’?

It would be lovely if you place this suggestion on my Discord Channel related to the App but it’s not neccessary! Just reply this message as I am really curious about the idea

Regarding the App itself:

Thanks again and wish you a wonderful time!

Edit: The App will be totally free, there will be no ‘Advanced’ version
I will make this tool as amazing as possible ;]

By “Gifs and Emojis” I was mainly referring to like a twitch emoji integration type thing where cute emojis or gifs float across the screen when viewers used commands or something of that nature. But since its youtube, it could just be a random behavior that happens where a little cat emoji goes floating by.

Also thanks for taking time to respond!

I see what you mean

Great idea, and actually this year I will be on my way to learn about API so actually that’s something I may be able to implement in future!

Thanks for the suggestion!

I truly believe in what you’ve made here and I hope it blows up and others stumble on your talents.

Thanks for taking time to respond and I’ll definitely be lurking around and checking this thread often now.

Thank you! I really appreciate your words!

That really means a lot to me and makes me wanna do more stuff and upgrade what I already provide to give you the best experience!

Now let’s see what do other people think about it

The first update is there!

The version goes up to Alpha 1.1

Edit: Just checked and the Fullscreen functionality is still wrong… gonna fix that quick and reupload

Soo, there’s a bug with UE4

I was using the r.SetRes command but it doesn’t work correctly at all

Therefore Alt+Enter or F11 can be used to toggle it instantly! 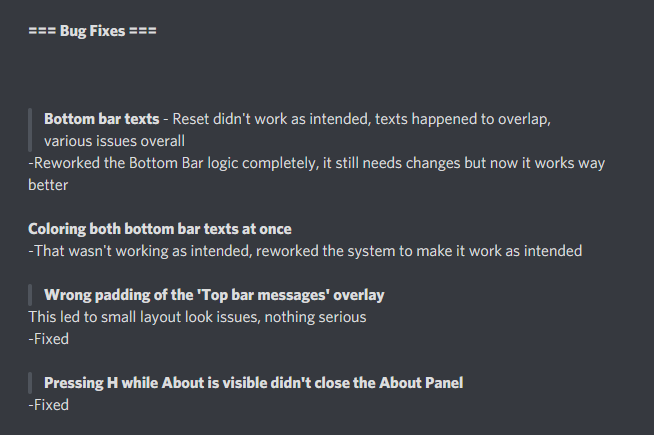 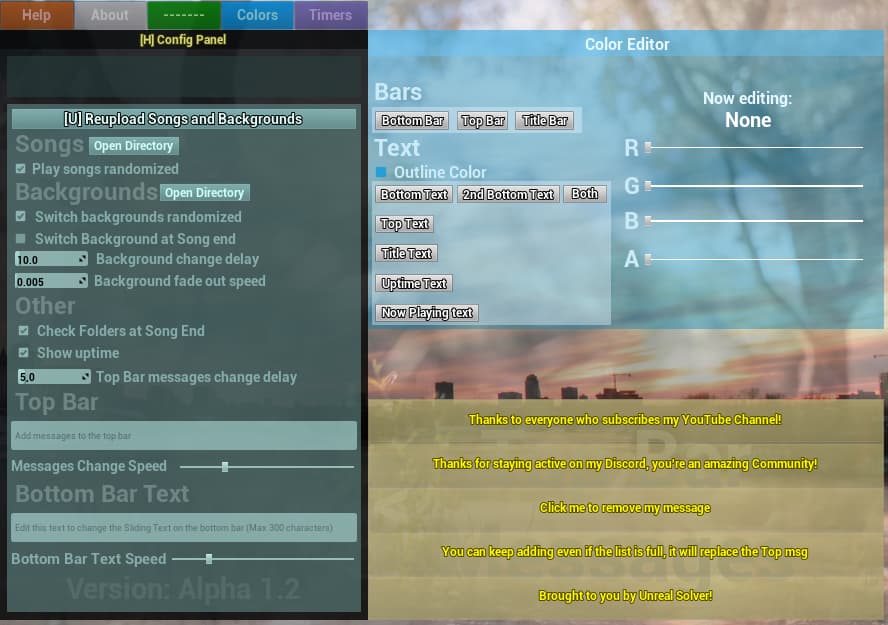 UMP is no more in Alpha version! 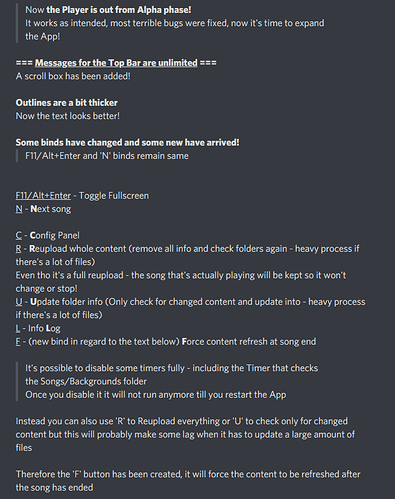 A big update has just been released - it is still in a Beta version as it still needs changes
and improvements but already provides variety of new amazing possibilities!

Now you can make the Player look totally unique with:

Here are some examples of possible setups with images I created in 15 minutes! 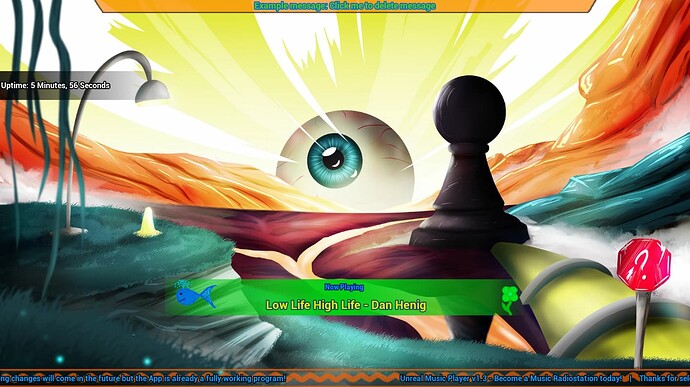 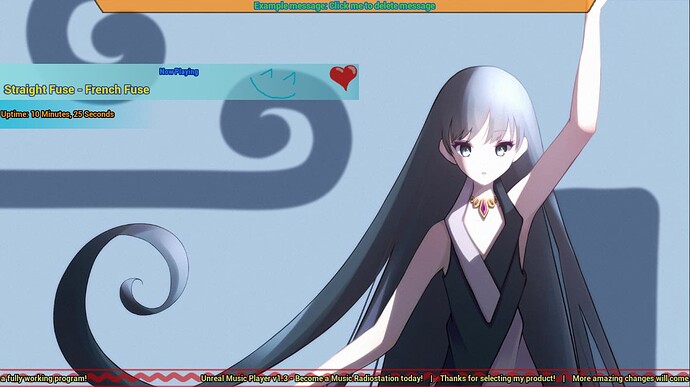 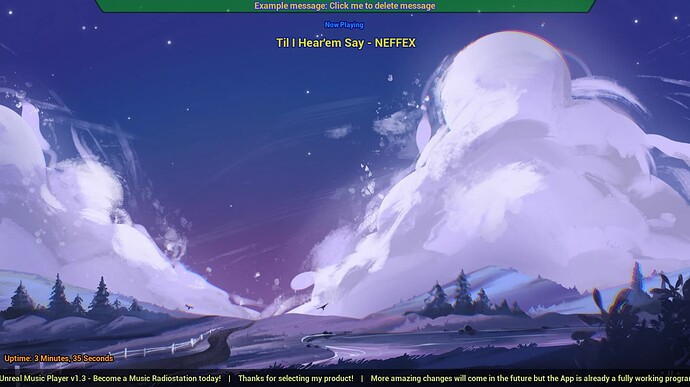 We didn’t got any updates recently but no worries! I am preparing some special stuff this time
which are:
-Playlists
-Sequences

and finally I was able to find and build a good GIF Plugin so gif support and all the other stuff will come in the next update! It will take some time tho, hope it will be out within next two weeks

Also in the future the parts will be very easily movable around the screen!

Another little addition I am working on

And what you see above is just the beginning, I want to make it way more useful and customizable ;]

And the next release will be delayed, I am working on the Project from scratch

I have a few reasons for that, also the app was meant to be pretty simple and intuitive

Also I want to make it into 3 modes:

Also as I have the GIF support I will make some stuff simpler - no more bars or texts from my side - you will be able to make custom texts with various settings, as well upload your favourite GIFS and show them on the Player!

Also I am considering buying 2 plugins from the Marketplace to make the App even more amazing!

The latest version is still downloadable on my G-Drive! (Check original post at the top) 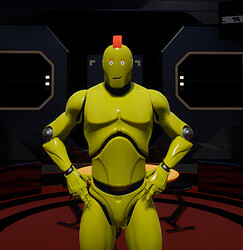