I develop Unreal MARK to learn some of the fundamentals (and specifics) of the Unreal Engine 4. And want to release a whole finished project at the same time. I’m not going to make new demos, but instead just use those from Epic Games.

Done for 0.3.0: Pre-Alpha
• Given a user determined target FPS, “Drop” displays how many seconds the FPS dropped bellow that target FPS.
• Results are calculated via Blueprints. Frames, time, current FPS, average FPS, min and max FPS.
• Reflections demo migrated for the main menu as an infinite loop in the background: Replaced all spots lights with cylindrical point lights. Floating lights removed and increased indirect lighting. Three new posters added, and some posters are moved around. Steam particle system added to cast dynamic light at the entrance. Removed some architecture in front of the gate, so that the gate’s signs cast shadow, too.

[Development Stage]
This is a countdown that ranges from 3 to 0.

3 stands for Pre-Alpha
(Setup of a crude program base (source code, Blueprints, technical engine assets) that comes with some feature implementations)

2 stands for Alpha
(Mostly about feature implementation on a more refined or even more advanced program base if needed. Some debugging)

Some screenshots of the tweaked Epic’s Reflections demo as a looping matinee background in the main menu.

A new poster for the demon hordes have returned! :0 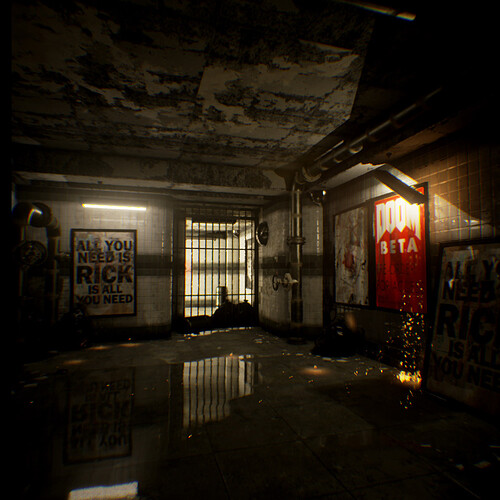 The benchmark results for my computer which is a i5 6600 and a GTX 970 rig, are below. The settings are all set to Epic. The target FPS is 60 for the new “Drop” results.

Ignore that “Throughput”, it is not useful. It turned out to be just a percentage based version of average FPS. Not what I originally had int mind, actually.