Hello, and merry xmas all!

It seems like there might still be some memory issues with the launcher.
I have been noticing a lot of strangely timed cpu load lately, and today I came back to the computer, which had been running through christmas, and the memory use was over 4GB. There was also 16% CPU load on an 8-core setup. I doubt the launcher is mt, so I reckon this is about full use of one thread. I did’t get to check that, until the launcher closed, finally reacting to me clicking ‘close’ 3 minutes before

The launcher and marketplace is coming along greatly, at least when it comes to features and design. Now, if only it wasn’t so sluggish some times

The launcher is autoupdating, I believe, but in case it has any bearing; I am running 4.6.1. 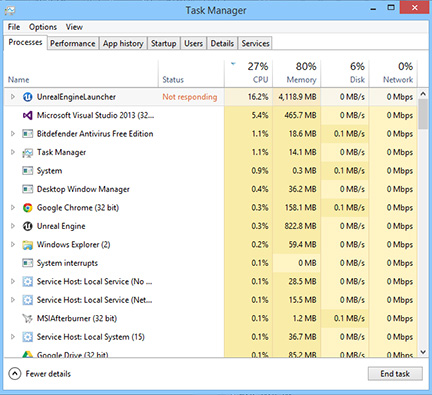 (I’ll also use the occasion to express, if any devs or reps sees this, how awesome it would be with a web-frontend for marketplace. It will probably help sales as well, since it will lower the barrier to see all the awesome stuff there before you get an engine sub :D)

Thank you for you report. We are aware that the Launcher still has a memory leak and our developers are investigating the issue. It is JIRA OPP-1015 in our tracking software.

If you could, please post your dxdiag and follow the 10 steps in the link below to get your Verbose Logs. They will help us track down the issue.

Still going on apparently, the memory leak.
I downloaded launcher on October 27th, 2015.
Currently at 1.86GB memory usage and growing, also very high cpu usage at 16%, actually higher cpu usage than when I play a modern game like ARK Survival Evolved which uses ~15%.
Of course I will close it when not needed but currently I need it open while downloading (slow internet connection, need about 4 days for Ark Dev Kit).
Rough specs are i7-4790k, 16GB Ram, Win10 x64

The JIRA is still active in our system. This is something that we have been looking into and we are hoping to correct it with a series of fixes coming up.

Ok, great, will keep en eye out for updates, thanks for the info.