I am very curious if anyone outside of Epic has been able to get UGS to work with their projects/teams? The documentation is sparse, with no real instructions for standard setups, but what little it does provide, has yet to produce any working results for me.

Typically the place we get stuck every time is opening the project with UGS and it tells us it couldnt find an engine relative to the path in perforce. Which is not really clear. Looking at the code it seems like it wants the entire engine in your perforce depot with your project (which is midly insane due to the size of the source and then also removes the whole point of UGS which is to be able to distribute binaries easily). I have set up the perforce depot both ways, with and without the engine in it and still have not gotten past this hurdle.

So if anyone out there has had more success id love to hear your process for getting it up and working!

I finally got this working for our team. Here is how our game repo is set up. 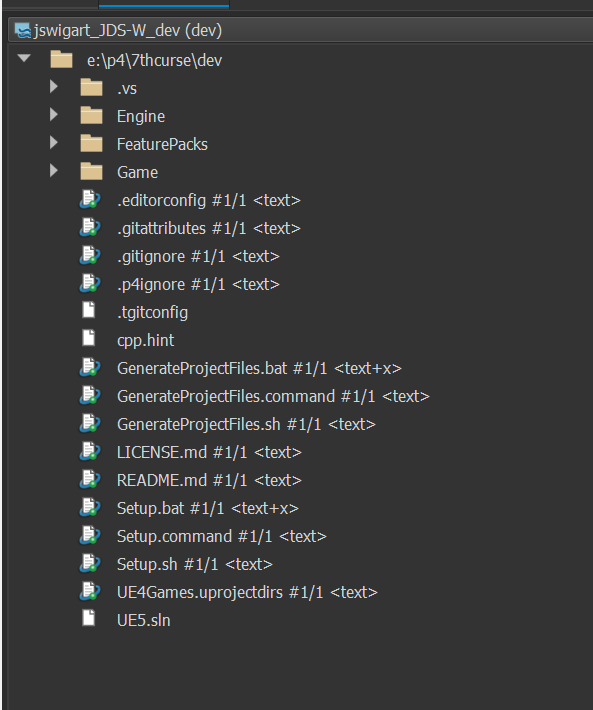 Essentially your game project becomes a folder within the engine folder. In this case I have just called it Game, but you might name it based on your game or whatever. This is the structure that UGS expects to be able to find.

Along with this structural change, you also need to clear out the engine association line from your games uproject file.

I basically pushed a fresh untouched copy of the Unreal Engine git depot(minus the .git folder) into perforce. I did not run setup.bat, so our depot does not include the dependencies, because very few users are going to compile their own engine, and they can do that client side if they need.

Our jenkins CI/build machine pulls our repo, and it has run the Setup.bat so it has the dependencies downloaded, and it executes the automation tool to build the engine+project binaries and push them to another stream, which UGS has been configured to pull from as the “precompiled binaries” path. This gives non engineering folks a way to pull binaries that engineers don’t have to pull.

Also, you don’t need to worry too much about the size of the repo. UGS provides some nice filtering functionality, and you can customize the filtering further.