I am having a problem with Unreal Engine 4 and it freezing my computer.

What is happening is that when I run UE4 and start working in the Editor my GPU clock shoots around like krazy. It starts out around 810 then spikes to 1200 before dropping down back to 810 then after about 10 min or so it shoots up to 2012MHz

It is at that point that my whole computer freezes and I cant do anything. The screen says on but the computer is completely shut down.

I can use Unreal Engine all day on the Laptop but cant go more than 10 minutes on my PC. I originally thought it was the Memory as I had it installed wrong and upgraded today just to see if that would work. It is not the memory so I am now moving on to the Graphics Card since it went into the red or maybe it is the Windows OS.

I have tried to find the crash logs but they are not in the K:\UE_4.18\Engine\Programs\CrashReportClient where I have my Program files. I dont think it can create a crash log since the computer completely freezes
Afterburner GPU Image 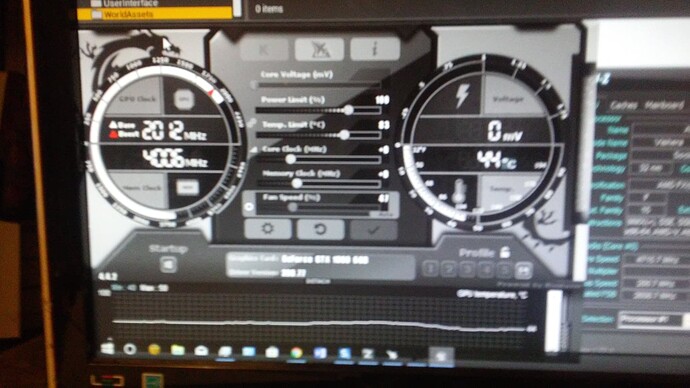 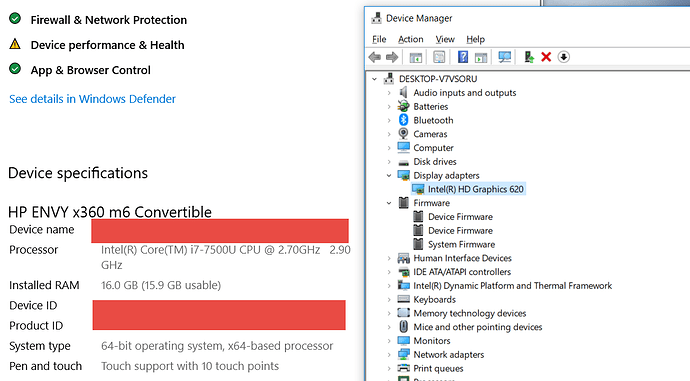 Before you worry about UE4 you should be certain that your graphics card speeds and voltages are good. Heat can be why the speeds are fluctuating but it sounds like its throttling back for some reason. And then when the speed goes high and it freezes, it sounds like either you should up the voltage or lower the max speed. You could drop it down as a test (to like 1000 or so).

Best thing would be to use a GPU profiler to max it out and see if you can get the problem without UE4 being involved. If you’re sure it’s UE4 specifically, then you might want to set the graphics profile to something low so it doesn’t use the GPU so much. Maybe it will stabilize.

Interesting. It sounded like what we get when we’re trying to max out our overclock so I figured it was something along these lines.

Water cooling should keep you in good temp ranges if you’re not doing anything crazy with the clock. Maybe there is a problem with the thermal coupling between the CPU and the heatsink where the tubes attach. And the cooling system still needs good airflow (unless it has a refrigeration unit, which most do not). What kind of temps are being reported?

Getting a new CPU would obviate the need to fix it but when you take out the old one, see if the goop looks OK. And make sure you couple the new CPU well. Good luck.

Thanks for the info. I ran a few tests with other games and having Chrome open and I may have an answer that I may not be able to understand.

So I took one of a more resource intensive games I have on my PC and ran it alongside Chrome. My computer still froze and looking at my NZXT window my GPU was fine. So that is good. I think the answer is now lying with my CPU. The fx9050 from what I read on line is a very hot and power running CPU. I am using the recommended Corsair H100i Water Cooler for it, but when I have all 8 cores running I believe that is where the issue is now.

I reduced the Cores from 8 to 4 and while there is a heavier load on the CPU now(less cores) the computer is staying up more and no freezing for the past 1hour. So it is not Unreal itself as you suggested,but my CPU. I am getting a fx8370 with a Wraith Cooler and will test how that operates in the system.

For the past few hours my CPU tem fluctuates between 50-63 degrees while playing WoW having Chrome open and a few other processes running. the CPU load fluctuates around 27%- high 50s.

So I think I am on the right track for my solution, I have decent airflow for my case. About 10 inches from the back around 6-8 on top(where CPU cooler takes in and pushes out) and 8 inches in front of the case. I may have to move my file cabinet so I can get more air space.

I am updating Unreal now and as soon as I can get it going I will update here.

Those temps are practically frigid. Mine idles at around 50C. I think the cooling system is working fine.

I’d look into upping the voltage. I’m no expert on hardware but I have overclocked once or twice. You’d probably do better on a hardware forum. You’ve heard of Tom’s Hardware I assume. I bet they’d be able to help you way better than anyone here – especially me.

Thanks for your help Jin_VE, I have been using UE4 now for the past 40min and the system is running fine now. So it appears that the Core number was the issue and now that I am at 4 my PC is running normal again. I will be testing further with 6Cores but for now I am good.

I am going to consider a better cooler system so that I can get back up to 8Cores.

As I said, it’s almost certainly not your cooling system. The fact that you do better with fewer cores supports my theory that this is a voltage issue. Please look into that. I hate the idea of a CPU not being used to the fullest.