When Unreal Engine 4.7 Preview 1 is selected as the default engine or the engine was previously selected open the launcher and you click Learn/Content Examples. it shows 4.7 and status of Syncing remains as is shown in the picture.

I know that I’m using a preview and the Content Examples via the launcher are for 4.6, but the 4.7 still shows with the Syncing status which might throw some people off or if the launcher is actually attempting a sync could place a small request log burden on server or maybe lag out launcher a bit. 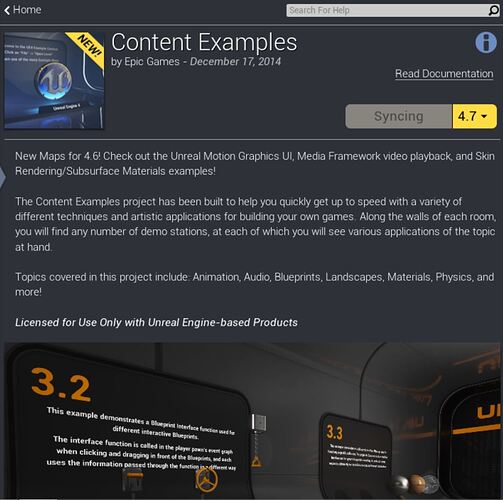 Thank you for the report. I have entered this as JIRA OPP-2067 in our tracking software. Our developers will be investigating it further.

I second this issue.

This issue still persists with version 4.7

same issue here. any workaround? I have 4.7 preview 3

I think this happens because 4.7 hasn’t reached ‘release’ status and there is no specific content to download for it yet.

The version appears as an option because Epic’s online system sees the 4.7 preview though and so it adds the option in for content.

Amigo is correct, this was due to the content for 4.7 not being finished/tested while it is still in Preview. This has been fixed internally and will be fixed with a future update to the launcher.