Unreal Engine is appropriately named. I’ve been working on a seemingly simple landscape project. I shared some screenshots with friends and co-workers, and they all thought I had taken a trip to New Zealand and snapped some photographs during my travels. When really all I did was generate a basic world machine height map and create a simple two material blend. I mean, it took an hour to put together and tweak at the most. I didn’t even change any default settings in the engine. No Depth of field, post processing, advanced lighting etc. Just a simple two material blend and people think it’s a photograph. It’s really amazing what Unreal can produce in just one hour of work. I had one guy tell me “That’s beautiful, I want to live there…” So, like I said, one hour of work, Unreal…

I did also use some of Megascans surface materials, so maybe that has something to do with it as well. Still, very impressive in what you can accomplish in a short time. I didn’t even think it was all that good.

People who are CG artist can probably tell it’s not a photo, but other than that, I’ve had to tell people it’s just a game engine… So anyway, when I actually finish the project I can’t imagine what people will think. 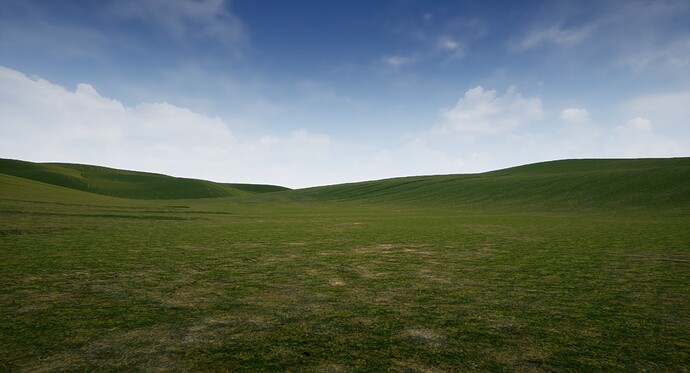 Like I said, nothing special, but people who have talked to me have no idea that they are CG shots. Oh and the rough edges on the hills in the second image is due to resizing the image to get it on the forums.

i would say that unreal engine is Epic !