Hello everyone! I’m releasing an Unreal Engine 4 environment project I been working on for a while. It was my final for my school project last May and ported it to mobile after taking a small break (17 years of school finally over). If anyone decides to download my environment and walk around, let me know how it runs and what device you used. You can choose between first person and VR mode. First person allows you to move around and explore the environment. VR mode has a matinee camera that moves in the environment so see it in VR, so no controller is needed.
I tested my environment on a Samsung Galaxy S5 and OnePlus One device (both from 2014). If you have something more modern, it will run even better than what I was able to test on. 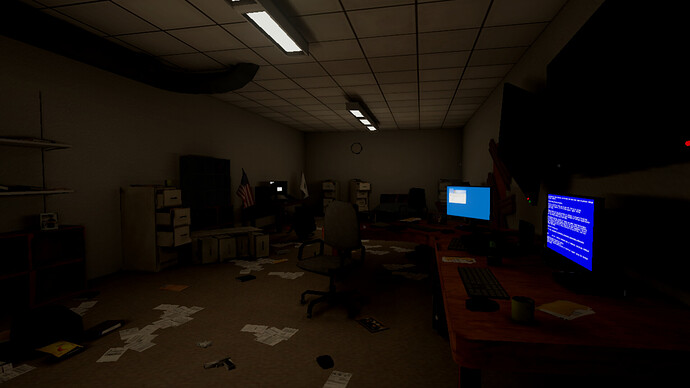 A little about this project:
For my final project last year, my instructor asked the class to think of an environment we would like to make for our final and gave us 5 mins to come up with something. I come up with an idea to create a deserted police station that is being taken over by plants from the inside out. It was a big project for a single student and a lot I had to learn on my own. I wanted to create an environment that I will later port to a mobile. As much as I would have loved to work on an exterior environment at the time, I chose to stick with the interior project because lighting environments is what I have been waiting to learn for a long time. I wanted to learn how to light environments well without having just one light source (like the sun directional light). I knew this project was going to have many rooms where I would be able to light all the rooms differently.

I was told by a new instructor the school hired that I wouldn’t be able to complete the project in time. I had my doubts since he had no experience in game engines and was able to finish my project in time (I even had time to learn a little bit of Unity).
After I graduated, I took a short break and later went to job hunting. I met a mobile developer last year in S.F., trying to get to know people to land a job or get feedback on my work. The person I met was a 3-D environmental artist who worked on mobile games. He really liked my police station environment, but said “an environment like this won’t run on a mobile device if that is what you’re going for”. I was a little disappointed as I’m interested in mobile games and VR, but quickly took what he said as a challenge. I spent the last month converting this project for mobile device. I added LOD to objects, reduced texture size on objects, broke up rooms for level streaming and added precomputed visibility, etc. It took about 2 weeks to finish the port, 1 week to test different settings to maximize performance and 1 week to figure out how to distribute my app (had a lot of build errors when packaging a shipping APK). I tested this environment on my Samsung Galaxy S5 (a phone from 2014). By using an older phone, I was able to see what I had to tweak to increase performance. By using a modern smart phone, the game will probably run fine without heavily optimizing my environment, but that’s not the proper way to make an environment. Now I’m going to take a small break from all this. If anyone has any questions, please let me know!

Also, check out my VFX mobile project in the Googleplay store: https://play.google.com/store/apps/details?id=com.SAGames.VFXDEMO