It was working absolutely fine in 4.8.3 - I could easily rebuild source on the fly with the editor open, so I am not sure what happened.

I am just wondering if this is a bug? or if this is something I might have done wrong?

Are you able to build a new code project with the editor open? Are the two errors posted the only things being reported when the build fails? Does building work if you use the Compile button inside the editor.

I’ve just encountered a similar problem with 4.9. The compile Button from the Editor does build the code now, so building from Visual Studio is not the way to go.
I guess the real question is: Is this a bug with 4.9, or the recommended workflow?

HI Doug, I think the problem stems from the fact that I may have introduced some bugs in the C++ code. So when attempting to compile from the Editor, the system would not compile.
Based on some of the threads on similar topics, I decided to close the editor and re-open (which you cant do if the code is failing). The main reason to want the Editor open is to use the Class Wizard, so I get a nice icon to represent the UE type (and gain familiarization with the Object Library). However, if you cant get back into the Editor, it means ‘deep-end’ (back to no sleep till 2am, etc).
So now I’m in Codeland without a ‘flashlight’, and lost another 2cm off the hair line.
I’ve got no way to get back to the editor until I can get the entire system building from C++.
Also note. Renaming C++ Files, is a bit more complicated what than the usual workflow. It requires closing the Editor, Cleaning the Solution, Rebuilding, and re-opening the editor. The community post have been helpful (How do I remove a C++ class from my project code? - C++ - Unreal Engine Forums) in understanding this issue, but while doing this exercise, I’ve managed to have about 20+ C++ files (Headers and Source Files) wiped… That is to say files went missing for no apparent reason. Not fun!!! (To everyone seeing this. Do not do a permanent delete on any files while following this workflow).
I’ve not been able to get backinto the editor for the past 24hours (for this project, all other UE4 projects work perfectly!!!), as I’m still attempting to get UMG/Slate code building.
Finally, this is My first push at doing a UE4 C++ library, so I am actually learning the nuances of the workflows. That being said, I cant see a reason for code disappearing while cleaning and rebuilding the solution. If this were a production build!!! Yikes!!! Kindly let me know if I missed something.

Oh… Everything else is Fab. Love UE4… Just need to stabilize some of the workflows around:

One More… If you create a brand new C++ Project. Both the Editor and Visual Studio will launch. If you immediately attempt to build the VS C++ Project, it will fail with Access Denied. This seams logical as the Editor May need to lock certain files, but to a newbie (like myself), this may cause alarms.

I encountered this problem with 4.9 and 4.8 while trying to get up to speed with the Visual Studio workflow. The following steps should get you past the errors and able to step through the code correctly: 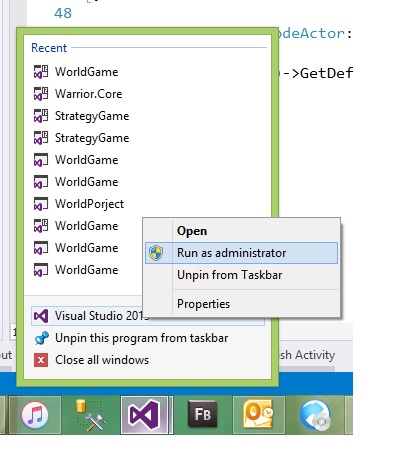 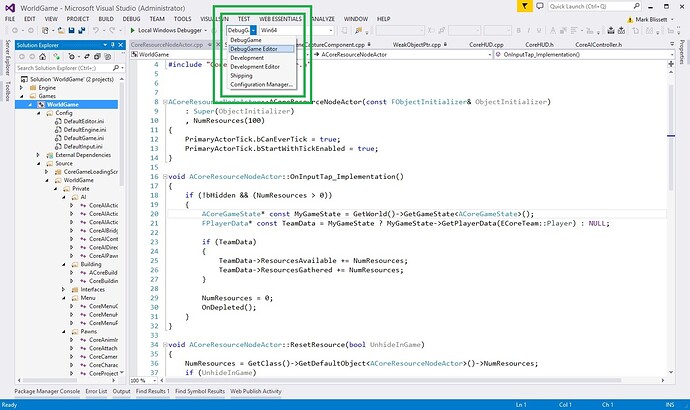 From here you should be able to code and step through the editor as per normal.

NB. It also means that you start your day from Visual Studio, not the editor. Good luck!

Was this error generated when selecting “Build” or “Rebuild” with the editor open? Unfortunately this doesn’t show what the actual error message is. Could you post the entire Output log from the failed VS build?

Hi Doug, It happens on both the Build and Rebuild. But Thanks to BissetMDB. His suggestion fixed it. The profile I was using was development. I switched to Debug Game Editor (I didn’t have to run VS as administrator.). I’m working in WIN8 which doesn’t give me the run as admin option when I open up the .sln file). but now it compiles and Hot Reloads as before when I do a rebuild with the editor open… I’m not sure how it got changed to Development Profile… maybe when I upgraded… Anyway, it works now. Thanks.