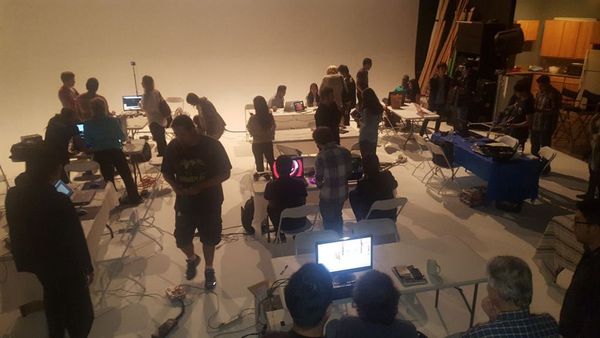 Tue, Sep 22, 2015, 7:30 PM: Hey Guys! So for this month we will have two different developers presenting!Steven Walther - Pokkit QuestSteven Walther is a 3D generalist and game designer from Torrance,

Hey Guys! So for this month we will have two different developers presenting!

Steven Walther is a 3D generalist and game designer from Torrance, CA. He moved to the Los Angeles, Santa Monica area to pursue his game design dreams. He participated in USC’s gamepipe laboratory as the Lead Technical Artist on the project “Towards the Start”, as well as attending Santa Monica College’s Game Design department, with a focus on level design and animation.

Expressing an emotion in a way that can only be told via video games is what drives him to create, examples ranging from colorful platformers like “Operation A.C.O.R.N.” to survival horror such as “Beyond Earth”. Steven currently works at Macroh, an interactive marketing company that develops advertisement games using Unreal Engine 4, and also works freelance, working on an action adventure game called “PROXY”, also made in Unreal Engine 4. Steven also enjoys a good bike ride down Ballona Creek, and can cook a mean breakfast when unleashed in a kitchen.

[FONT=Arial Black]Most Recent Video …And on to the original post! Greetings, fellow developers and game enthusiasts alike! We are currently working on a top down dungeon crawler designed from the ground up for mobile...

Pokkit Quest is a top down dungeon crawler designed from the ground up for mobile. Ease of access is the foundation for which every mechanic is built upon, all while still making the game engaging. Explore many diverse dungeons and fight several goofy creatures ranging from cute jelly blobs to awkward skeletons. Collect loot to earn adventure badges which unlock more challenging dungeons as you control a nameless adventurer whose objective is shrouded in mystery.

Dru Erridge, a lifetime gamer and technophile, was enticed to LA in 2010 by the USC Games program where he obtained a degree in Computer Science Games. Dru believes in variety, whether in work or in play. He’s worked in everything from Clean Energy and Intellectual Property to mobile software and PC Games, from 3-man startups to Microsoft and Riot Games. In his spare time, Dru can be found reading, writing, playing strategy games, or chattering feverishly about fresh ideas.

Info on the game:

The Maestros is an online multiplayer RTS (real-time strategy) game set in a humorous fantasy world where you control a commander and his squadron of wildy cuddly and mildly vicious minions. You can play as either the dieselpunk Knights of Teutonia with their clunky, transforming robots or as the futuristic Alchemists of Regalis with their adorable, mutating monsters.