Unofficial UNREAL ENGINE Community Discord with Tip system . Fun community to get or give support for all things Unreal Engine. A fun and productive tipping system. Unreal Engine users can incentivize others with a TIPS to help with support, development ect. for your unreal engine project. You can tip or be tipped at Unreal Tip . Join the Discord . 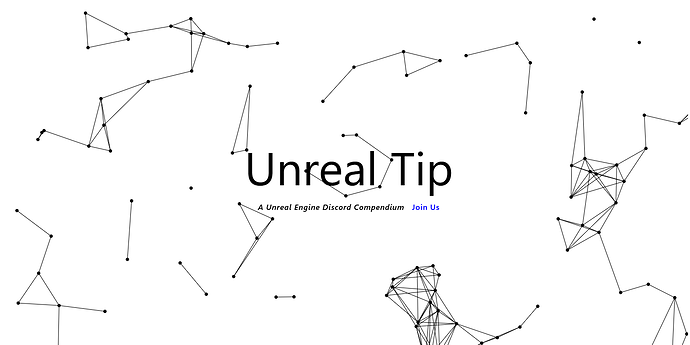 Work better in a group? Want to leverage the development power of Dozens independent developers to one singular effort? We are putting together some collaborative community driven projects. Games, VR and OpenWorlds. Join us and let’s build something AMAZING.

Looks pretty dead at the moment. Really looking forward for something like Unreal Fast Track that happened last year. It was such a nice environment for both beginners and pro’s.

Far from dead. We just launched a month or so ago. Just getting started. We will create the most innovative environment for all Unreal users to come together and support one another. Collaboration and LIVE support like never before seen in the Unreal community. A value system in place to motivate and incentivize Collaboration/Support.

Time is the only real value in the universe. Make sure you to TIP someone for their time if they help you with your Unreal project . There are many places to find help for an Unreal Engine query but the support is lacking in real time responsiveness. Unreal users often have to wait for days or weeks to get an answer to a query. Unreal Tip goal is to achieve query resolution in less than a minute. With Unreal specialist competing for a TIP . Query resolution will be swift. No matter if you are seeking support for an Unreal issue or seeking talent to help create something AMAZING.

Unreal Tip has the infrastructure to facilitate 24/7 LIVE collaboration like never before seen in the Unreal Community. Will it take time to get the word out and for people to adopt the Unreal Tip community ? Sure it will. Like said before we launched Unreal Tip a month or so ago. We have yet to define our full capabilities . We are open to suggestions and insight. No one person has the final say about Unreal Tip. It is an open source and community driven. The Unreal Engine community by vote will dictate all aspects of Unreal Tip.

No matter your skill level from professional to just starting out. you have a home at Unreal Tip. The birth of the largest unofficial Unreal Engine compendium has already begun.

We have just started building the Unreal Tip Wiki. Overall goal is to build the largest Q & A Unreal Engine database .

We are open to suggestions and insight.

Suggestion: Try to distinguish yourself from all the other flavors of Unreal discord servers including Unreal Slackers. Find a way to draw in the Telegram / Signal community as well. As Discord is a bit too much like another Facebook for Gamers. That won’t please everyone.

Great insight. Thank you so much for sharing it. We do have a Telegram bridge being planned in the short term for discord. Overall goals are to get away from discord and establish the Unreal Tip decentralized open source free network. A true p2p environment that brings together Unreal Users like never before. To allow unlimited unreal engine developer from all over the world to work together with the power and productivity "the feel " of being in the same room. To share resources “files/data” with a couple clicks encrypted and secure.

The Unreal Tip application being the bridge between the “groups” Unreal Engine builds. This linking and syncing being handled by the Unreal Tip application powered by a sovereign open source decentralized network. Q & A database being stored in the ledger for full node users so offline functionality will be possible. Unreal Engine is in our opinion is one of the most innovative tool of our time. We just want to support that tool however possible. If you just sit back and think of everything you can create in Unreal Engine it’s a powerful inspiring emotion you arrive at. That raw inspiration powers Unreal Tip development .

Please if you have more insight or advice we want to here it at every junction in the development of Unreal Tip. Unreal Engine is powerful. Community driven open source supportive tools should be equally powerful. That’s the prime directive

Hope everyone is enjoying fall season. Wanted to invite you all to join our community. Some UnrealTip community projects are in the works . We have thrown the notion around about UnrealTips also hosting a decentralized Game Development Studio. Come Join Us