so finally i managed to do a short demo video for my upcoming game (please ignore the mouse cursor in the video, i only discovered that its on when i was already through most of the cutting of the video

). I thought i would get some opinions here, be them good or bad (except for the video cutting, i know this is really bad!) : Right now the video is just about the main menu and the first dungeon level. What will be in the game when its finished?

Features that MAY get in at a later time(if there’s enough time and funding, no promise on that):

Also, for having better “comfort” using the bow, the following options are already implemented:

As you may see in the video, i make quite some use of existing marketplace assets, especially for the character models. The final models depending on the funding i applied for and may get (or not).

Note: For all the guys that are in Vienna, Austria: This Thursday (28th July) i will demo it (again) at the Unreal Engine User Group Vienna Meetup

For your ‘simulate archers paradox’, what is that, exactly? Because I was thinking an easy mode would perhaps show an arc as to where the arrow will fly before you release it, perhaps?

For your ‘simulate archers paradox’, what is that, exactly? Because I was thinking an easy mode would perhaps show an arc as to where the arrow will fly before you release it, perhaps?

The short and simplified version is that even though the arrow is not exactly straight (since it then would shoot through the middle of the bow), it still shoots in a straight line in the direction the bow is aimed at.

And, thanks for the nice words

just a quick update for the progress, as i had a demo running on the last UE User Group Meetup (Vienna):

Currently i am working on the campaign map, a first draft here: 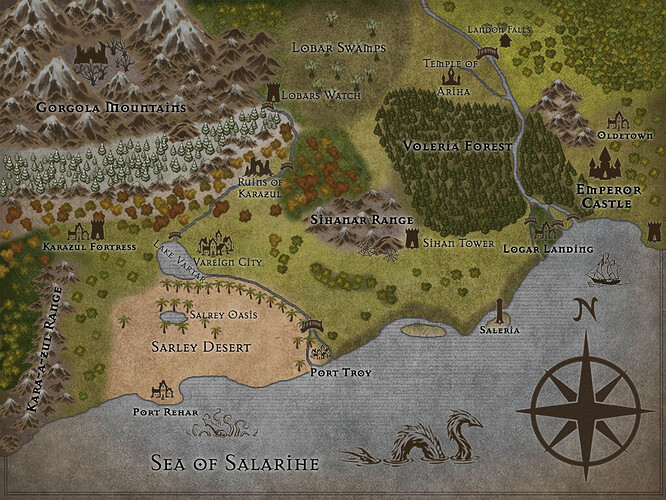 Also starting work now on a second character class, the mage. A new progress video will be probably done next week