Anyone have suggestions for uniquely identifying actors on the blueprint side (would never need to be translated / exposed to players) across different maps under the same persistent level?

I know of GetDisplayName which can be used to do a string comparison check, but as the notes say, when I package a build the references don’t work as intended since the labels get wiped to object name.

Is the label being wiped to object name in packaged builds done because of some kind of restriction like string overflow, circumvent bad developer habits, or some other reason?

If I were to create a parent Actor class with a string variable and then derive all my game objects from that, should that be ok in the long run?

So far I have a pretty good workflow down with multiple maps dedicated to script work broken into manageable beats for various designers, but the one struggle is a clean and efficient way to get hold of actors from other maps. Right now we place empty actor in individual maps by the real actor (a hero character like Tyler might be in one map but another designer needs reference to it in their map too) and get the closest actor to the reference point – there’s got to be a better to do this. 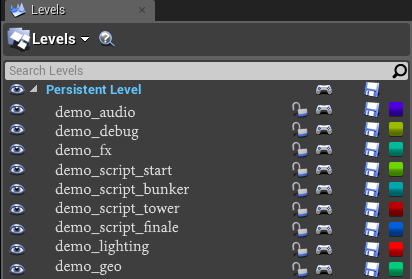 I’ve seen threads on global variables, but I’d rather have a good way to just grab an array / single actor by a string name so designers can do what they want with the identification feature.

If I were to create a parent Actor class with a string variable and then derive all my game objects from that, should that be ok in the long run?

Why not? It’s the best thing to do when you want to have global variables across the actors. I do that all the time.