hi @Poeta_Kodu Thank you for the patch,
Move to the local directory containing the repository you have the source code in using Git Bash or Git CMD and type the command to check remote

nothing to commit, working tree clean

I fully agree, the problem was with the VS2022 17.2 PREVIEW versions. UE5 now works great with the 17.1.6 release version. Thank You so much, Miklos

I haven’t verified this myself yet. But as far as I understand it the issue was with 17.1 and 17.2 preveiw versions.

If you look in Visual Studio Installer you should have your application listed there. If it is named Preview you will need to uninstall it and reinstall the proper full release instead from Microsoft’s website. Download Visual Studio Tools - Install Free for Windows, Mac, Linux

Configure how the engine is built.

Note: The documentation has not been updated for 5.0.

Update: Able to build without error…

Edit: Make sure you have the correct older compiler installed (use Visual Studio installer) 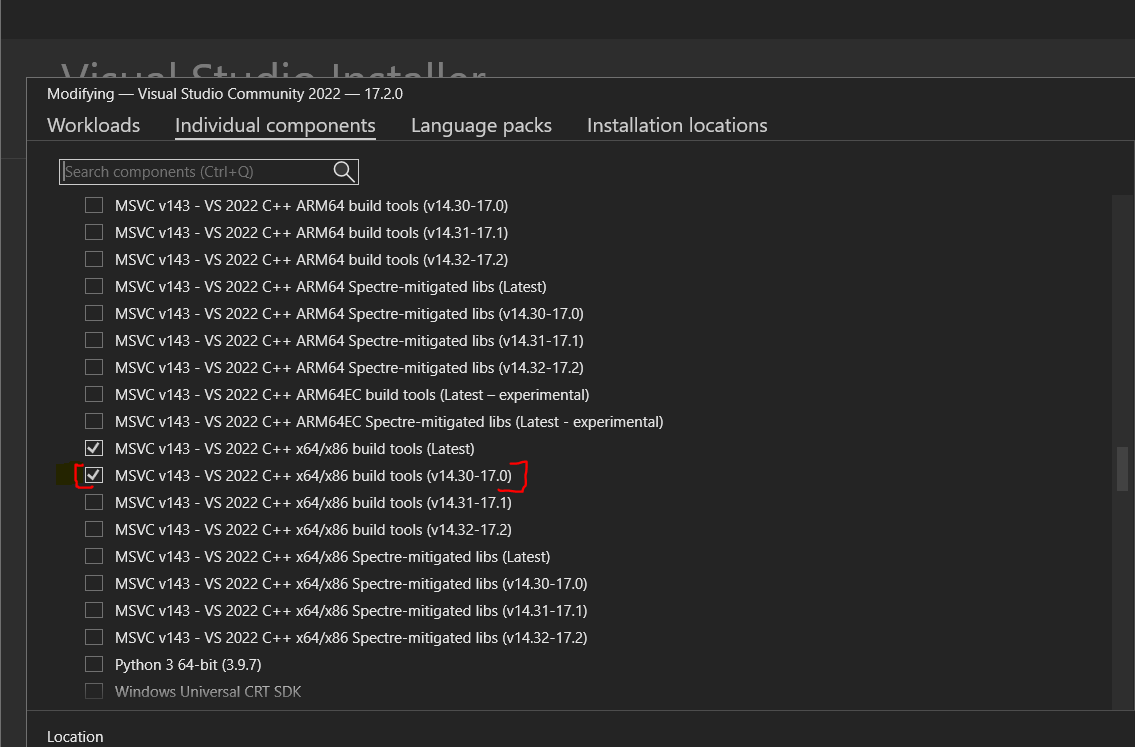 Edit2: You can make use of placing the BuildConfiguration.xml file in your documents folder instead of the appdata directory, as others have posted: C:\Users\USERNAME\Documents\Unreal Engine\UnrealBuildTool

Thanks, this solved a bunch of little errors and the pictures helped a lot.

Thanks so much for this!
I was looking everywhere and this solved the issue.

Just as a quick helpful tip for others, you can also add the BuildConfiguration.xml file under C:\Users\<windowsUsername>\Documents\Unreal Engine\UnrealBuildTool (Aka under your users Documents folder)
UnrealBuildTool will use that config as an override to whatever is present under AppData.

Thx man, this is a nice fix until UE5 supports newer VS2022 versions!

Unfortunately, I’m having this problem and this didn’t fix it for me. Using 17.2, but not the preview version, installed the older compiler, used your XML, but still getting the json error. The only way I can find to fix this is to do a full rebuild every single time.

Thank you @dkjb63411 ! This solution worked for me without changing the version manually on all .json files.

@HERO4K60 Check this article showing possible locations for the BuildConfiguration.xml Build Configuration | Unreal Engine Documentation
I put mine on in [USER_DIR]\Documents\Unreal Engine\UnrealBuildTool. I just had to fix the quotes and remove a trailing 21 in the xmlns declaration. After that I had to modify my VS install to include version 14.31 of the compiler and finally did a clean/rebuild.

Unfortunately, I am in the same boat as JasonEldred. Not using the preview version and the UnrealBuildTool just disregards anything in either the appdata folder and the my documents folder.

Requires me to do a full rebuild every time.

Edit:
The fix actually did work for me. Must have been tired since I had every toolset Except the one I was trying to target.

thank you. Worked for me

Will there be any problems if I keep this file like that, I mean with unreal updates or will this file be overwritten?

I would hope a patch or fix makes its way into the engine source. I do believe that I’ve seen a few pull requests up to address it.

The next time there’s an update from epic, revert back to using the default latest compiler and see what happens.

thanks – what i did is installing an old 2022 version with offline installer and it works fine now - until epic support 1.2 officially

When I try to remove this version of BuildTool, the VS alert me that the other components like “Graphics Compiler / Unreal Engine Installer” will not work anymore… How do you set this to early version and get Unreal Engine compiler working well?

You can leave the latest compiler version installed, as long as you update your build configuration xml to use an earlier version (posted earlier in the thread).

I saw an update to visual studio 2022 this morning (ver 17.2.1) and tried reverting to latest build tools and it seems the error is gone (for me at least)