Hi. For the last month of work on my project i found several bugs in sync groups behavior. I dont know how many more oddities has sync groups code, but its already critical for my project.
The problem is that the sync groups can unexpectedly reset self time position during transitions between anim states, or while blending by BOOL, INT or ENUM nodes. Also sync group can reset time position when it shouldn’t be.
I create example project with reproduced each case with WALK and RUN anims. Blend between this anims driven by custom pulsating variable for clear observation of changes in sync group. 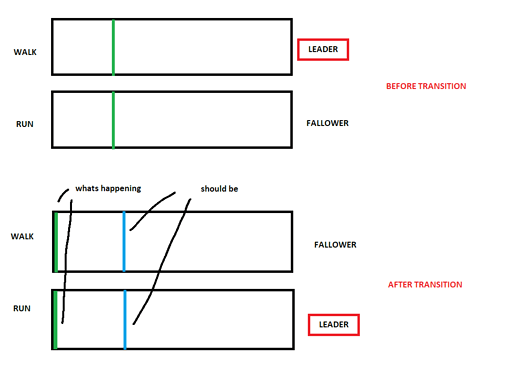 Same problem like case 1, but in inertialization mode that error happens always, independently to blend duration time. That means i cannot use this feature if anims in different states are synced. 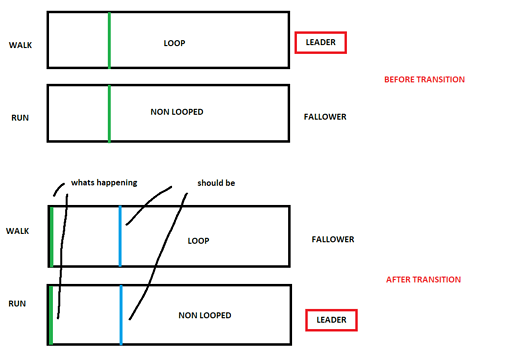 If new leader animation in marker based sync group is non-looping - sync group always reset position in all cases. 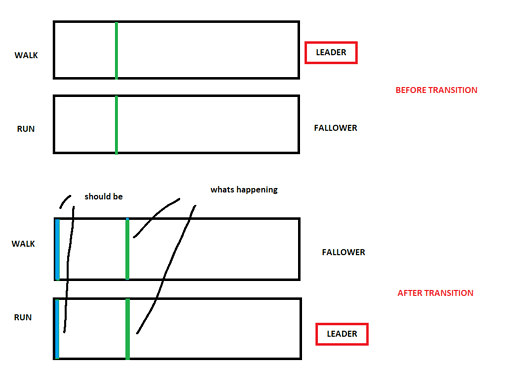 If blended states has true “Always reset on entry” option, marker based sync group will keep prev position without reset.

Who knows any more thoubles with sync group? And who knows how solve this?

I have the same problem with sync groups, but in my case, I try to sync walk loop and stop animation, sync markers just don’t work at all. Have you found a solution for this?

Yes. I solve this issue.

For your case with start stop transitions you can manually modify sync group variable as you want.

… this may be worth a shot. Not sure they actually care about it, but they are tweaking animation stuff for ue5. So maybe they can pick this up too.
@LDelayen

I myself have used the groups (in .22) but I have actually never even bothered to check if they were working accurately / never noticed them not working as I expected them to.

Yeah, thanks for the insight. In my case, I had to do a lot of stuff manually, as stop animation has different speed unlike walking cycle. Sync groups and markers seem like an awesome feature, hope devs will fix it in the near future

Hello, we work with 5.1.0 version and came across new issues about sync groups with sync markers and inertialized transitions.

I can’t start animation from the beginning - it leads that I can’t play start-stop animations because they start from the syncronized position. I think transition leader role must work, but it doesn’t.

Maybe somebody found any solution about it.

Pic: mix StartMachine (that produce sync as leader by markers) with Idle sequence (sync is off). Result (StartState) is used by general movement state machine, transition sync between StartState and LoopState works correctly.