Hi there! We would like to introduce the game, both of us were working on for last few months.
What do you think? We are very curious!

Underdesert is a challenging FPS rogue-lite action game. Play single or in co-op. Dynamic gameplay with randomly generated dungeons, so don’t hesitate to obtain the power, unlock new loot, and find a way to save your planet. Stand up against the gods and fight against hordes of monsters.
https://www.youtube.com/watch?v=6lDv2H-SPtU

The player has many different weapons and dozens of items. Each map, opponent and item is generated randomly. This makes each approach unique and unpredictable.

After death the player loses all the items collected during the game and the basic currency. The only things the player keeps after death are unlocked new items and the special currency collected, thanks to which he can improve his character, companion, skills and weapons.

The main task of the player is to defeat 3 final bosses, located in 3 different worlds. The boss is located at the end of each map.

Chaos appeared out of nowhere, poisoning every living creature on Aryasan. The sky became black, rivers, lakes and oceans began to dry out, while the vegetation was gradually dying.

Animals, due to lack of food, started to attack each other, ghosts, that used to emanate their light, disappeared as if they had never existed before.

Chaos also broke into the citizens of Aryasan, what led them to stop trusting each other and it also isolated them from their families. With time, quarrels and disputes between the families began to erupt, which soon resulted in war.

In the heart of Aryasan there were mysterious undergrounds, where nobody had ever gone to because of the legends about this place. It is supposed that magic was born there. It gave life to creatures with a magical core to keep them alive. They were to guard three regions of the underground.

Since the Great War and chaos, the lands of Aryasan have not yielded. Rivers, lakes and seas are now dry and dusty. Life disappeared from the surface of Aryasan, but magic not. Over time, it lost most of its power but managed to create the last life from which I was born.

My name is Eremit, the incarnation of the powerful Noel before the Great War, the only hope for the fallen Aryasan.

Hi everyone!
Many of you asked us about same calm shots from one of the floors from the first map.
They don’t show any dynamic combat. Just early production look showcase. 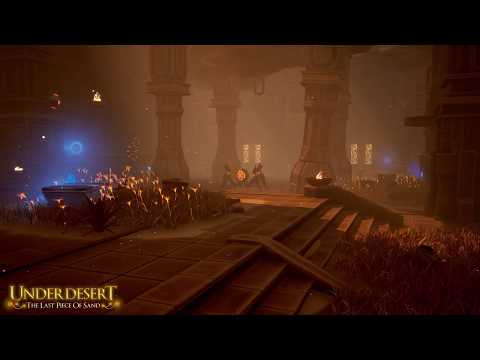 Hi guys!
Our Mini-Boss lost his shield. Only 12.5 metres high so I think he will find it soon. Stay tuned ^^

Underdesert has received an Epic MegaGrant! This is unbelievable!
Big thanks to Epic Games and UnrealEngine and all the people that support us!