UMG Widget reading a variable from a BP being rediculously weird

I have a widget bp class and in the designer I have a text box parented to the canvas which is bound to a text variable that is public and exposed I do the usualy casting etc. Then on my vehicles BP I’ve tried assigning a float value into the text variable many different ways. It seems to only take text in, even if I cast from a float to text using the to text (float) function. Ive tried pulling this variable from where its printed in my debug log, from on game start from event tick, everything. Its just weird. When I play the game I can hover over hte node and read the value (plus it gets printed to screen as part of my debug).

No matter what even if I make a text var in my vehicles BP and plug my variable into it with a to text function and even an absolute node to amke sure its positive it iwill only display the text var, or if I just try to get the value of my vehicles float var from the event graph in the widget BP then nothing shows up period. Heres a screen. If I bind the textblock to NewVar (text datatype in the vehicle BP) it displays NewVars default value (sadagf) if I bind it to the float CurrentDepth it displyas nothing; blank.

And yes I’ve looked over the UMG start guide and watched the tutorial a few times now. The rest of my HUD is shown in the viewport (images and buttons) Edit: I should add I’ve been messing with this for two days, so I’ve tried many many different combinations. 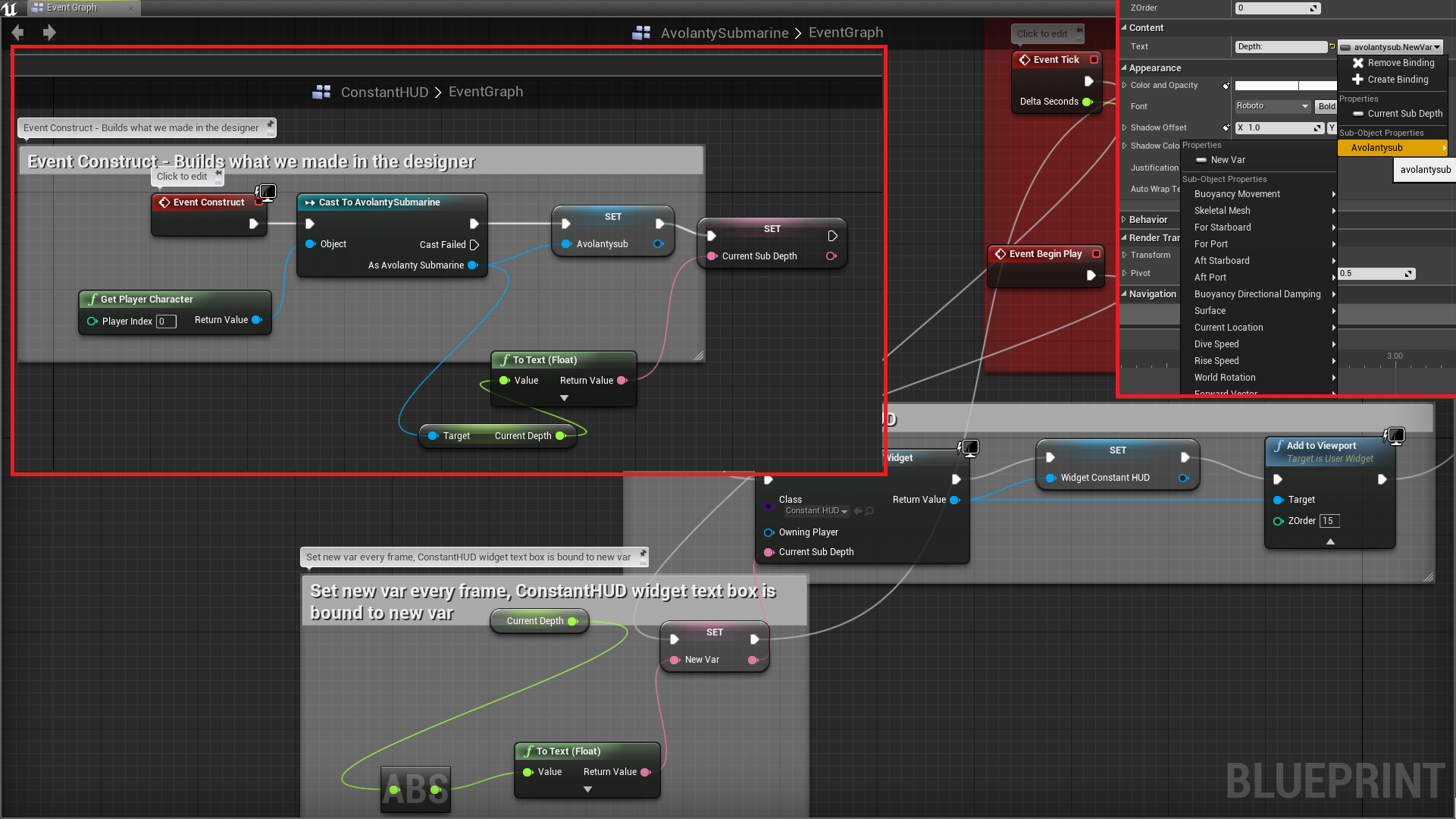 Edit: I should also add if I use an event tick in the widget event graph to set current sub depth and then bind the textblock to current sub depth it just shows 0 and I get a ton of accessed none PIE errors. Again if I play using this method, I can hover over the text varaible “new var” in the graph editor for my vehicle bp (avolantysub) and it reports the proper value with every frame.

I can eliminate the PIE none errors by not using the event tick to set the variable but rather just plugging the var into the ConstantHUD_C widget blueprint cast, but it just wants to read 0 every single frame. When I hover over the float to text it says value out of scope or something like that.

If I bind the text box to a function in the widget event graph called get sub depth text 0 and for my return value I use current sub depth (from my other bp, avolantysubmarine) and use a float + float node, whatever number I add to it, will get printed. so if I add 50. it prints 50. So it works, but I cant get the value of the variable in my other bp, avolantysubmarine, to be read in my widget blueprint constanthud.

Well if I use an editable text box and then make a reference from constanthud to that editable text box then set text(textbox) for that textbox in my event tick sequence it will display the value, id just rather have it in a regular text box…