I’m having a problem where my editor crashes (without even asking to send a report) when I try to utilize the OnKeyUp or OnKeyDown events in my game. I can’t seem to reproduce this when creating new UMG widgets in other projects, but I can reproduce it when creating new widgets in my game. I’ll provide more information as I uncover it, but this is stalling my game’s development for the time being.

Okay, so I managed to narrow this down and reproduce it. It seems somehow related to the IsShiftDown function in the Key struct.

Just to verify this, I created a brand new project and have discovered the reproduction steps. Here’s how to do it:

This should instigate the crash immediately, but let me know if you have trouble reproducing it.

To clarify, removal of the “IsShiftDown” and “And” nodes from the BrokenWidget blueprint (and just linking the equals(“Q”) node into the if statement) will alleviate the crash. This is why I assumed it was related to that function. 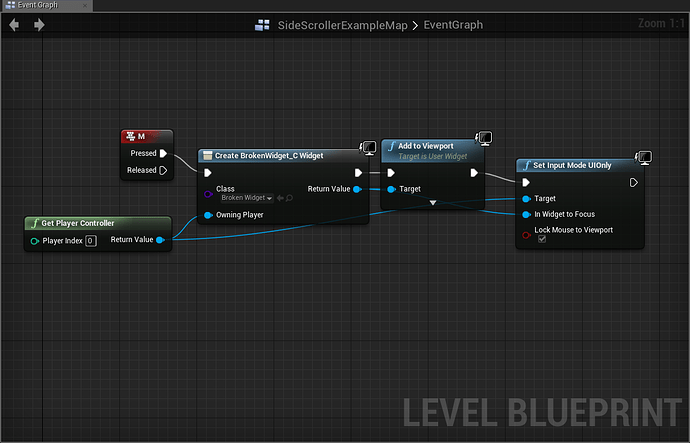 That is absolutely not the problem, and this issue remains unresolved (but I’m not allowed to un-accept this answer). If you’ll look more carefully at the screenshot, there is a sequence node which first calls the if statement and then hits the return node. Disconnected return nodes cause blueprint compiler errors, not windowless engine crashes.

Even with every execution pin connecting explicitly to the return node (see the attached “Still Broken.png”), it still crashes with an “Unreal Engine has stopped working…” dialog (“Hard Crash.png”). 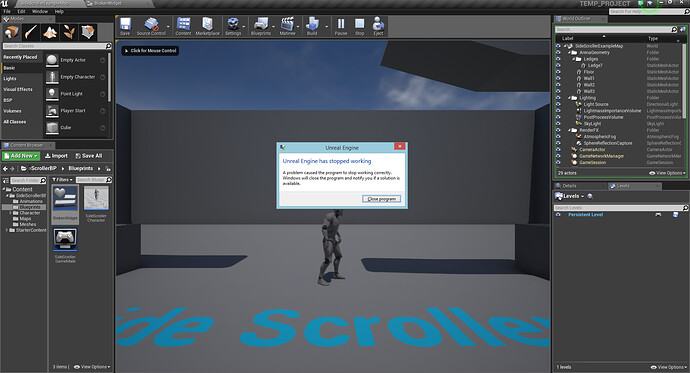 Again, allow me to propose that it has something to do with the “IsShiftDown” function call. Removing this node (and the if statement) from the graph makes Unreal Engine happy. Also allow me to reiterate that this worked 100% fine before 4.8.

I was able to reproduce the issue on our end. I have written up a report ( UE-17122) and I have submitted it to the developers for further consideration. I will provide updates with any pertinent information as it becomes available. Thank you for your time and information.

Thank you very much. And thanks for looking into it.

,Hello, we are using the 4.8.1 version and all our UMG blueprints are broken because of this bug.
Everything was working well before.
Now, every time we check the state of a modifier key (i.e.: IsShiftDown, IsControlDown…), the application crashes.

Any update concerning this issue?

I went ahead and double checked on this issue for you. I found that this issue has been resolved internally and that this solution will be available in a later version of the engine. I have also included a commit link below if you would like to integrate this change list into your project. I hope that this information helps.

Hi, after patch 4.8.3 the crash with IsShiftDown node is still there. Now, instead of freezing the simulation, it just close (stand alone window). If “playing” from within the editor, I get a “Stopped working” error message.

By the way, the github link to the commit is broken

Thanks for you attention

You are correct, this solution was not implemented into the 4.8.3 hotfix. As for the link you will need to login to github. After logging in the link should work. I hope that this information helps.