UMG. How to raise an image for z-order?

Hello all!
I made some UI-screens with UMG. This is awesome tool! And I made a custom cursor with this tutotialhttps://wiki.unrealengine.com/How_to_Setup_Custom_Crosshair_/_Cursor. It really helps! But my custom cursor is hidden by UI background image. My answer is: how to raise an image for z-order?
Every object in UMG has a Z-order property, but a custom cursor is drawn by Blueprint and I don’t how to raise it.
Any help will be great, thank you!

Are you drawing the Cursor in your HUDBP from something like DrawTextuer?

i think thats not possible in bp as far as i tested this stuff umg is allways drawed ontop of everything. But you can create a new Widget with an image inside wich will be your cursor. SetPositionInViewport is your friend in this case

i made as you said but it’s not help, can you explain this, may be i do wrong

Ive made you an example but in order to use it you need to do the following things. 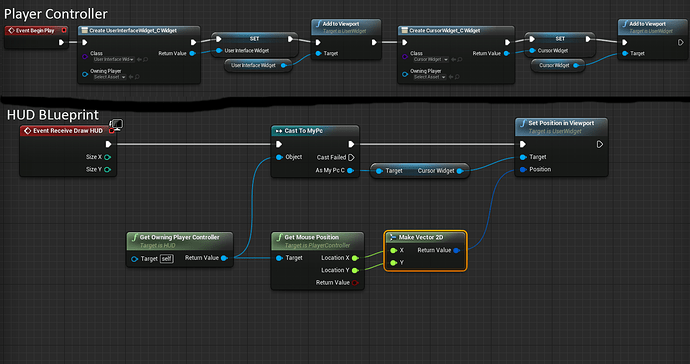 I personally dont like working with the HUD Class BLueprint because you dont really need it.

Thank you very mach!
Unfortunately, I can’t release the second part that about HUD Blueprint, my Player Controller isn’t complete with Cursor Widget.

I cannot connect Cast to PlayerController with Set Position in Viewport, how to make a node between them?
Background image is created as target but Cursor image isn’t. Why?

Drag of a Wire from your Cursor Widget reference

it doesn’t make anything (

well, it’s all good, thank you

You said that you don’t like to use the HUD Class BLueprint, how do you make a custom cursor else?