what am i doing wrong i seem to be doing it like ive seen people do elsewhere but it just doesnt work.

heres my viewport which is a widget called menu which has a vertical box wrapped with a border. 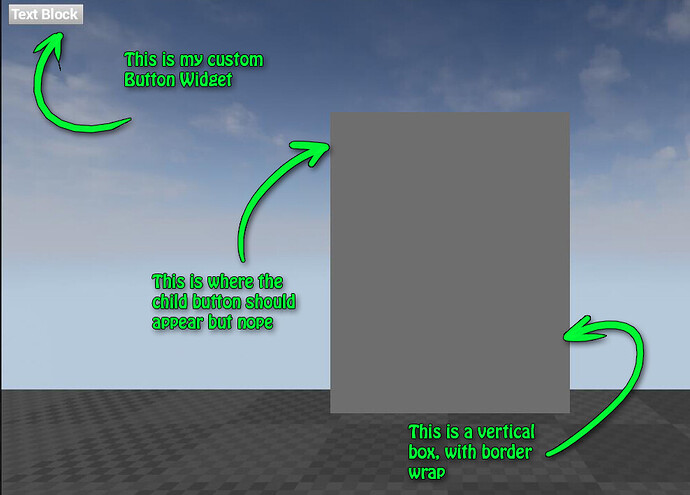 here is the bp graph for the menu, i can add a widget normally just fine, but when i add it to the vertical box it just doesnt show…? is it a anchor thing for the button class ( which is upper left by the way) 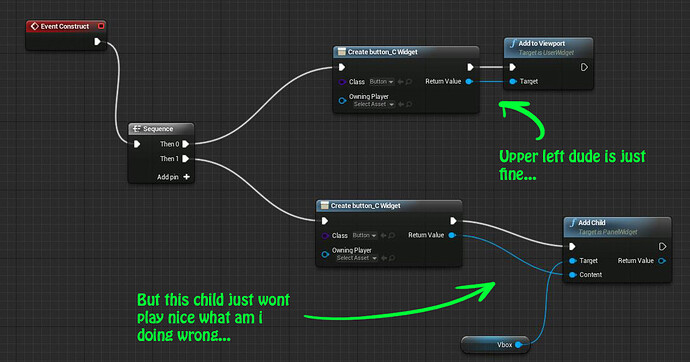 sorry if this is a total noob question…

Try to place something in that vertical box manually. Is it working ?

with the ‘AddChild’ node are you able to drag off the ‘Return Value’ pin and cast to a verticl box slot then drag off that and set a 'SetHorizontalAlignment" and “SetVerticleAlingment” nodes. if you can, try setting them to ‘Fill’?

I would watch the following video: Unreal engine 4 UMG - 6 - Adding Items to a scrollbox - YouTube

He does a really good job of explaining how to add items to a vertical box.

those two settings didnt do anything, but ‘Set Size’ to value =1 and SizeRule to Fill totally works.
tho now it has a built in padding i cant change, it just spaces them based on the number of them in the list, so 2 widgets take up 50% each of the vertical box.

it seems like they changed a lot since the experimental version a month or two ago… all the tuts ive seen dont do this cast slot thing.

This totally rocks thx man, wouldve never of thought of deleting the canvas panel for my listitem button.

you win … this is the Answer.

another thought, in your widget do you have the button wrapped by a canvas? try it without the canvas and see what that does.

That’s exactly what the video I posted shows to do