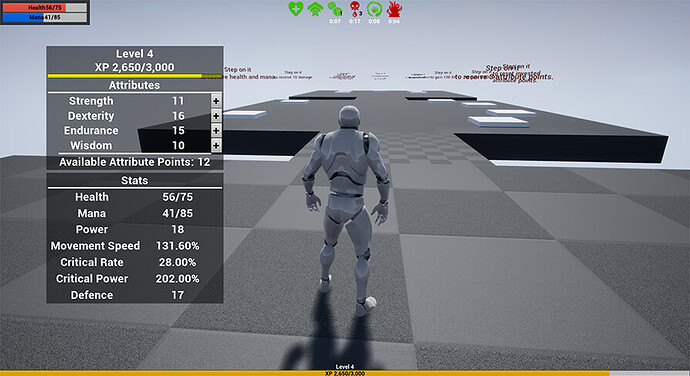 What is Ultimate Attributes and Stats Component (UASC)?
It is an actor component that can be added to any actor through blueprints. It provides complex and highly customizable character’s statistics system. Moreover, it also contains leveling system, ability to apply buffs and effects over time. All systems are created to work in multiplayer without any additional changes.

Detailed info regarding each section:

Let me know what you think. If there is something that you would like to see in this component or have any questions feel free to ask.
If you need help or experiences any issues with the component send me PM or contact through support email.

I hope I will be able to provide advanced and customizable stats system as much as possible.
Thanks for the support! 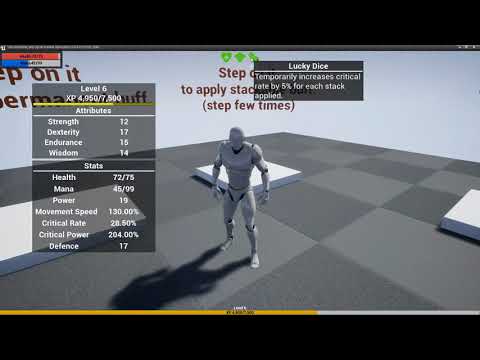 Behavior in single and multiplayer modes. 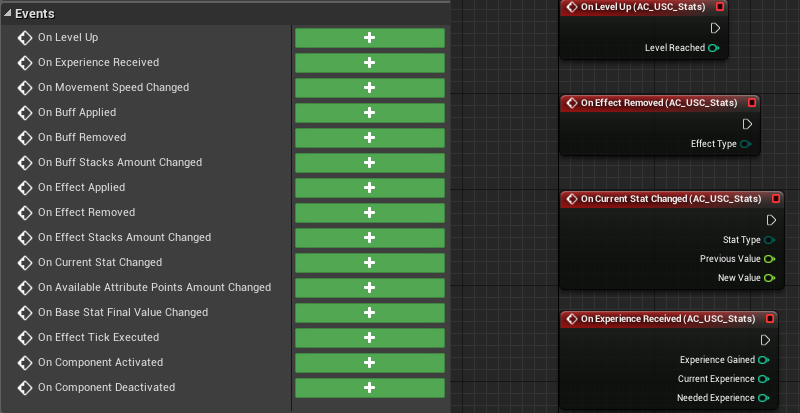 Quick question: how is it different and most importantly, better, than Epic’s ability system?

The main difference is that this component is created in blueprints and is fully accessible from blueprints level. It is closely focused on attributes and stats, using and affecting them.
Also, I believe it is much easier to use.

great stuff! I’d love to use it!

great stuff! I’d love to use it!

Thanks for kind words mo3nia!

Update: OnHoverTooltip has been added.

Also, UASC is now available on the marketplace!

New update has been submitted to the marketplace team.

Hi, I am curious about this system. I have different classes that use different attributes and stats. Such as Magician would use attribute Intelligence which would effect stat of Mana by increasing MaxMana. But Barbarian does not use Intelligence or Mana, but would use attribute Anger which would effect stat of Rage by increasing MaxRage and Rage per second. Is it possible to have different sets of attributes and stats with your system?

I’ve also replied to your email with more details.

New update with:
3 new stats and attributes calculation methods and special single function to remove buff OR effect (it helps to create “cleanse” effect which may remove buff or effect randomly, previous set up could remove only random buff or only random effect).

Hey great system, loving it so far. However, I’ve come across one issue. When either the AttributesWindow or StatsWindow are placed within another widget, like a WrapBox, they no longer seem to work. Any idea why this might be?

Hey Olathuss,
I have just tried to put them in a couple of different widgets and everything worked just fine.

What does not work exactly? Like they are not showing up or they are visible but stats data isn’t refreshed? Let me know what exactly is happening and we will work it out.

You may also add some pictures of your widgets set up (or if you prefer to send them to my support email).

This update contains some changes to blueprints. So if you are using UASC in your project do not import new version or you will need to implement some additional changes manually.

Major changes were done to widgets communication. Everything has been reimplemented to use blueprint interfaces, it grants possibility to update any widgets using blueprint interfaces events regardless they are related to UASC or not. More in documentation.

Also moving buffs and effects data to data tables required some changes. Since large part of buff/effect data is static I’ve decided to allow creation of buffs and effects in data tables so you won’t need to assign same data over and over. Basically you will need to specify only data like: what buff you want to apply, stacks amount, affected stats or attributes and its duration.

exadi thanks for the quick response. Sorry I didn’t respond as quickly, I got busy.

As for the issue I was having, after I tracked it down it wasn’t due to widgets. It had to do with the code checking if the attribute value has changed and therefore necessary to update the Widget or not. For now I have just bypassed the check until I can figure out how I set it up wrong. They all show as zero, which tells me somehow I initialize the windows and they come out zero after the attributes are calculated so while they show zero, it thinks it has already updated it to the correct amount.

example_stats2.png1428×458 186 KB
I just bypassed it for now by connected both true and false until I can figure out what I did wrong. Probably has to do with how I set up the “initialwindowsupdate” and all of that in the controller, which I copied from yours, though with some modification to fit my setup.

But here is my setup. The Attributes and Stats Windows are connected to the Equipment Widget.

Are all the values zero even before recalculation happens? If so, maybe stats and attributes base values aren’t assigned to the component at all?

Have you created set for default stats and attributes (in DT_USC_DefaultActorStats) and then assigned the set to the component? I have just refreshed documentation as well, so you may check out Implementation section.