Questions Can Be Asked On My Games Discord Channel: https://discord.gg/v8bQFmm

This casting spell / ability / effect / character system is built for games to run be hosted on a dedicated server but works on single and coop in 4.19 and above.

Perfect for any MMO, MOBA, Or Arena based game where the server must be authoritative over the clients. Works for any Fantasy / Futuristic / Scifi game.

It includes the functionality to cast abilities and apply effects on any character with the ability component attached to them.

1 Fireball with a knock back

2 Poison ball with poison over time

5 Wall of fire projectile that falls, once it crashes it lays flames in a row that ignites players

7 Exploding Blast knocks targets around the caster back

Create a child component and apply your own code or make your own base_ability class to create children from.

The character system includes a death system and regeneration system.

The example level is based on the Third Person Project.

The ability system can work with any game as a Spell Casting System or way to create a progress bar along side an action.

There is no sound with these abilities.

The showcase video was made with InfinityBladeEffectsPackages on the unreal marketplace for Free.

Every Ability seen in the demo video is ready to be used in this download.

Just make sure you are testing with dedicated server mode checked on!

You will need to create a Collision Preset called Projectile to get the example projectiles to collide properly. (See the Images above for the collision preset profile settings)

You never posted the picture of the collision preset profile settings and there is already a preset called Projectile set up by default. ?? Please clarify and you should really add a simple video walking people through how to tweak and create your own spells with variation. Etc.

Old-Crow has joined the Discord Channel and we have supported them there.

We have a video that goes over the content in the add-onhttps://youtube.com/watch?v=EJtYftMlha4
The video also includes instructions on setting up the Projectile Preset.
You can also rename or create profiles on your own to match your own abilities.

Projectile preset is what i used for the projectile abilities.
You can search for Projectile and replace all the collision name holders to your customer preset.
You can also make your own Base_Projectile Class and change the Collision Name.

We will add a tutorial video for creating your own ability to our checklist of things to do.
2 weeks eta.

This Addon is currently on Sale for 25% off during the Spring Sale. 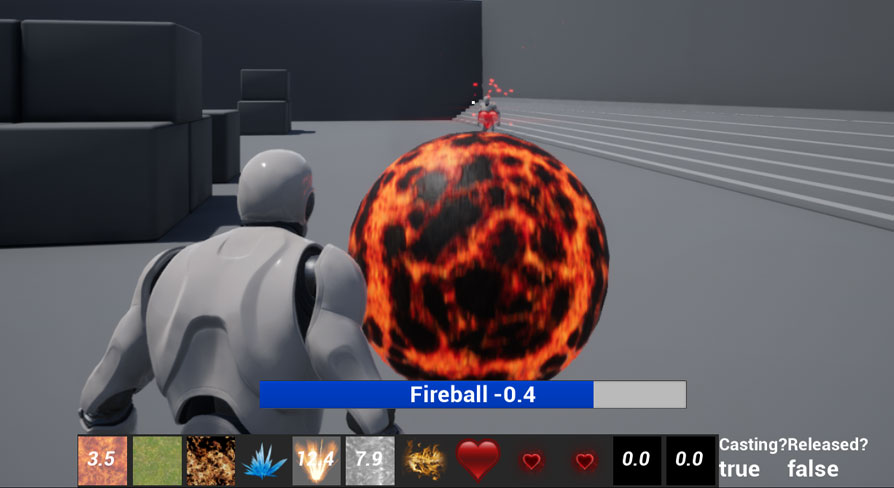 Could we get single player support for 4.18 please? most of the add ons that people have currently only support 4.18 so people are unlikely to migrate to 4.19 without all their add ons updated mid Development.

Could we get single player support for 4.18 please? most of the add ons that people have currently only support 4.18 so people are unlikely to migrate to 4.19 without all their add ons updated mid Development.

Hey Sweet, I will look into this since it is being requested a lot since posting the 4.19 comment on the product page.

If you would like to help us test it and you have purchased it from the marketplace please drop into our discord channel and we can hook you up with the build we are currently working to release.

Thanks Felucca, much appreciated.
I am not yet on Discord but I would prefer to test it once the Update is pushed through for 4.18 since I have not yet integrated the Casting ability into my system.

Any Idea when this will be updated so those of us not switching to 4.19 and needing single player support can actually use your awesome product?. I am at the stage where I am held up in development of our game until I get this system integrated.

When are we going to be getting the update for the casting system?

I must say I find it very impressive and professional when content creators DON"T respond to their customers.

This add-on is currently on sale for 50% off for 5 more days.

I forgot to update this thread:

4.19 has been released and includes Single, Coop, and Dedicated Server.

There are no changes to report.