So it looks to me that Adobe Flash Pro CS6 is no longer working well anymore especially since Flash has become deprecated and removed last year. It is hard to obtain it, especially legally and even when you do, it has not aged very well. I can’t even create animations the way I use to, regardless in relation to Scaleform UI design.

Speaking of Scaleform, that too has KTB (kicked the bucket). I struggle to get the plugins for that to work now.

I hate to say it but as much as I use to be an evangelist for the UDK (it started my career as an indie game dev in 2010 after all), but I am finding far less reasons to touch or care for UE3 anymore.

I wanted to make one final game with it for nostalgia sake and as a love letter to my origins with this engine, using the best of my skills to craft a very fun game. However now, I am unsure if that is even possible anymore. If I can create UI for my game, then the engine has effectively hit a project-crippling/killing dead-end.

So what is the ultimate point of this thread? I want to know if there is a workaround or alternative to this, or if someone can create one?

Right now, I am considering to just move the game to Godot instead, similar to what I did with Maze Qore before it (moved it to UE4). To be honest, I don’t want to risk anymore projects using the now notorious Unreal or Epic machine.

Hello man. I began my game dev journey with the nostalgic and defunct FPS Creator Engine, then, in mid 2013-2014, whenever my skills grew up I decided to move to another engine, and on that time UDK was the top notch engine for indie devs.

Yes, it has a lot of limitations, and I also think that the scaleform UI system kinda sucks, however, I decided to work under it’s limitations, and instead of making a new UI, I decided to modify the UDK UI a bit, specially the game HUD, to fit my game. But I was not able to make too much modifications, except some basic like adding a custom animated health bar, blood splash on screen according the ammount of damage the player takes, and so on.

I made a lot of cool things in kismet and some basic gfx movie nodes, like a complete working mission briefing and mission objectives menus, some animated in game icons and huds, and so on.

Here is my game’s page on Steam:

By the trailers you can have a look on my custom HUD’s, which are basically the default UDK Huds with some customizations.

I have already tried your demo. Impressive effort, albeit unpolished and leaves much room for improvement.

However I need a better alternative besides modifying pre-existing UDK assets, which probably still requires dabbling with Flash and Scaleform (as well as ActionScript).

What happened to the UIScene system? Is there not a way to re-install that in the last UDK build (February 2015 I reckon)?

Adobe won’t let you download Flash Pro CS anymore, even if you have a current Creative Cloud account, EVEN if you previously had installed Flash Pro through Creative Cloud. That means that all of the AS 2 demos and examples in UDK are forever inaccessible. You can’t even open the files to look at them and figure out how they did things, much less make any new classes or add any new functionality.

That being said, you can still use Adobe Animate to create AS 3 files. I’m working on an expansion for Himeko Sutori, and my UI has never been better. There are a few things that Scaleform left unfinished, and they’ll never be implemented. But for 99% of use cases, you can probably still make a really good UI using Animate and the Scaleform integration in UDK.

I will have to give this a try via a trial of Adobe Animate. if all goes well with it, I will keep UDK and proceed with the game development as originally planned. If not, I will have to move all work to Godot or remake it on the id Tech 2 RTX custom engine build I am modifying (Nacho iT2).

There was the kiscan kismet scripts for making UI.
This is the forums link

And the main page is sadly down.This is from the wayback machine:
https://web.archive.org/web/20171027203604/http://kiscan.ondrejhrusovsky.com/

It was finally released as free as it came out when ue4 was coming out so it didnt get much attention and im not sure if you can browse with the wayback machine to see the written tutorials.But i have the scripts and project file example of a menu made with this if someone is interested?

I cannot download Kiscan GUI Framework. The download link does not work.
If you have the files, could you upload them and post the link here?

Here there are 2 rars.One for the scripts and setup and the other one is a level project example.Never managed to sit down properly and give it a proper try.Please let us know if it shows potential.

Hey why don’t you do it from scratch ? with canvas and such it is not that complicated… 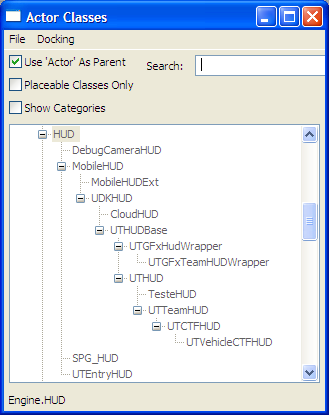 HUD (Head Up Display) is a kind of panel used to display information to the player using image and text. There are two ways of drawing the H...

Thank you. Downloaded and will give it a try for my project.

That would be fine for game HUD, but this is impractical for a main menu UI widget, perhaps even pause menu UI widget. Last I check, Canvas does not even support buttons.

The premiere UI tool during UE3’s reign was Scaleform. The only way to use Scaleform now is getting an Adobe Creative Cloud subscription for access to Animate.

You do have other options, like drawing your UI directly to the canvas, but you will have to write a lot of very basic stuff yourself. If there’s no support for buttons, for example, then you’ll have to make your own HUD class that keeps track of widgets’ render textures, their locations and depths, and then check the mouse coordinates to see what the mouse is over, and then call a function when that particular widget is clicked on. That’s all premade in Scaleform, and you can access it all with a single addEventListener in ActionScript.

Dont you understand you can create a butrton by your self? In the case you don´t! Just trying to help
: P