So i’m trying to move my character to a position using VInterp to constant i’m using Get World Delta Seconds to set the time on the timer but when I interact with the object that moves me it just moves me once slightly closer to the position and if I keep interacting with it, It will do the same thing until eventually I get to the position. I don’t want to use tick this worked fine in previous ue4 versions. 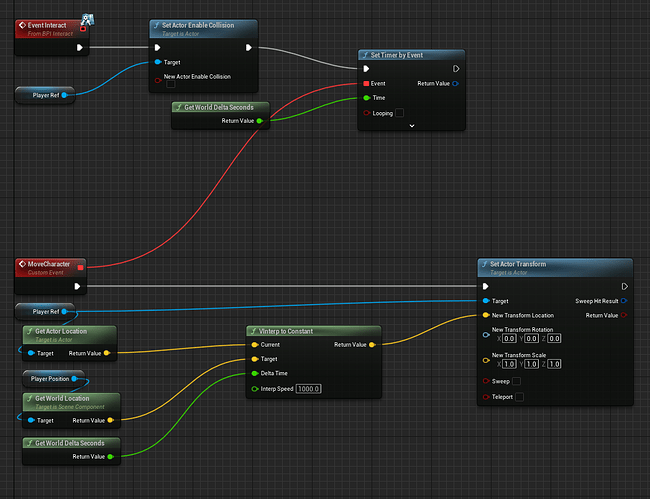 Hello @xESWxDEATHx1 you can implement this if even small occasion of moving an object as follows:
Create a blueprint and implement the same as you have here in the photos but with delta seconds. spawn the blueprint from class from anywhere in the world (transform doesn’t matter) and after an estimated time of finishing (delay after set actor transform) destroy self, pretty much the blueprint.

If I am not mistaken you want it to move till it reaches target and then stops? corrent if I am wrong with that.

You are pretty much there. You have not marked the timer to loop. Secondly you should promote the output of timer to a variable. This will store the timer handle. When you reach the target location “Clear and Invalidate” timer using the saved handle
Note: You should put some sort of lock in case you don’t want it to be activate while it is moving.