You may be running low on VRAM is my best guess?

Does it tell you “No duplicate texture GUIDs found.” even after restarting the editor and running it again?

I think the issue tends to stem from duplicating textures in a way Unreal doesn’t handle well, so multiple textures end up with the same GUID. I’m not too sure why it would be giving you an error of duplicate texture GUIDs when all your textures are still reporting unique GUIDs.

I’ve made a version of my plugin on a new branch that has the fix for the first and second idea. It also includes the full path name of updated textures, which should help make debugging a tad easier.

Wow! You are absolutely awesome! The newest version of your plugin fixed my errors!
Thank you so much, I really appreciate you going the extra mile in helping out.

If you are interested in which GUIDs where updated this time around, here is the relevant part of the log.

Assuming the log messages are accurate, it seems only engine textures were updated (outside of the media texture in the scripts folder, which purportedly changes every time). I’m very surprised that did the trick, as I didn’t think engine textures could cause any issues.

Very glad it ended up fixing your issues though! I’m a bit busy with other projects (I’ve had to downgrade from this version of Unreal due to other bugs), but when I get a chance, I’ll add a third button in the master branch that includes textures with empty GUIDs.

How do you install this plugin i’m really new to this, I’ve made a folder in the project folder called plugin but when I try to load unreal it says that its missing a module from a different version and closes it down ?

The plugin should be placed such that the .uplugin file is located at <Path to your project>\Plugins\GuidFixer\GuidFixer.uplugin

The Plugins folder should be next to (not inside) the Content folder.

cant boot ue5 when i put that into plugins that download 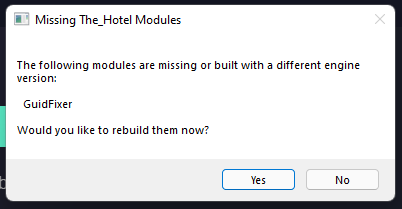 yeah i get the same thing

Do you (or anyone hitting this issue) have Visual Studio 2022/2019 set up to work with Unreal? I wonder if that may be needed for compiling the plugin.

I’ll put a download to a compiled version of the plugin in a few hours, but it will likely only work in 5.0.1 and on Windows (my computer is Windows 10, but it may also work on Windows 11).

Thankyou, even you trying is amazing i’m pulling my hair out at this point. I haven’t got Visual studio set up to work with unreal though

Yep, thanks for helping! No VS in my system. It may need it to recompile.

yeah no vs at the momment the amount of problems im having just no need for vs yet. plus im windows 11.

I’ve updated the plugin on GitHub to be a bit more thorough, and it now has a separate function for updating textures with an empty GUID.

A version of it already built for UE 5.0.1 on Windows can be found here.
I created the build on Windows 10, but hopefully it works on Windows 11 as well.

@davisctools
yeah mate works on windows 11. and works now with out having to compile/rebuild

I can confirm this works, your an absolute star !11 Thankyou

This worked for me! One texture was causing the crash at 35% building texture streaming, my project was a conversion from 4.27.2 to 5.0.1.