I have an issue with the Add Force node in UE5. If an actor has initial velocity then applying accelerations less than about 30 cm/s^2 with the Blueprint node Add Force (with Accel Change is checked) causes an abrupt change in velocity, namely, the velocity drops sharply to about zero and then fluctuates around this value. It looks like the actor’s movement starts to stutter after a slight acceleration. Applying accelerations above 30 cm/s^2 does not cause problems, and the speed of the actor changes smoothly. 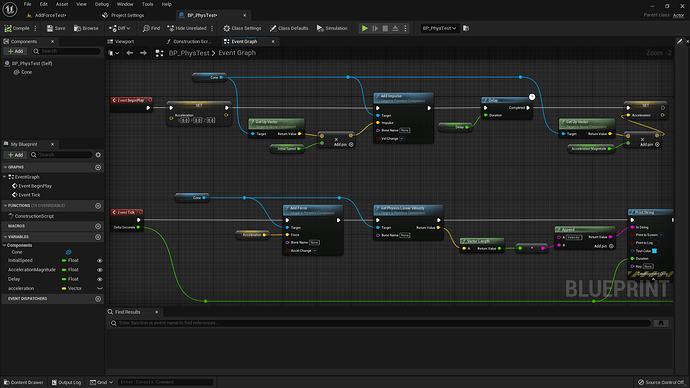 I have a feeling the physics object falls asleep if its below a certain velocity.
You can check this by selecting the physics component (cone) and then find the “On component Sleep” Event and just print a string if it’s firing.

If that’s the case, you ran into the same bug as we did → Sleep Family / Thresholds ignored - Physics abruptly stop - #5 by Homerdu291

Thanks, I checked as you suggested. The cone fires the “On component Sleep” event every frame but never fires “On component Wake” despite it moves very slowly (stutters) after a small acceleration is applied. I’m not sure which is the cause and which is the effect here. It seems that applying small accelerations triggers some optimization logic which erroneously drops the velocity to zero which in turn fires the “On component Sleep” event. On the other hand, linear damping alone slows down the cone smoothly even though the acceleration tends to zero along with the velocity, but in this case cone falls asleep early as described in the topic you mentioned.

Great news from the Epic team: the issue has been fixed internally and is expected to be available in the 5.1 release (details Unreal Engine Issues and Bug Tracker (UE-149771))