I’ve been working on re-theming Unreal Engine recently, the studio I’m working for found similar feelings but I personally find that the current theme of Unreal Engine has too much visual information going on, and I’m not really a fan of the gradients across the editor.

After starting to look into it, I found that the editor itself is highly customizable and I’m really enjoying coming up with this theme.

I’m regularly updating here (https://twitter.com/codekittah/statu…01962249682945) on my twitter - but hope to release the first iteration of the theme as open-source on Git. Currently, it only requires overriding images in the Engine Content folder. Further plans are to work on iconography and if I’m able to override Slate in a plugin, I have some other padding/margin modifications and visibility ideas in mind.

I’ll update here whenever I have some more updates - but as this is my free time project from work, and some have shown interest - please be patient!

Github link!
Here’s the latest, read the readme for instructions on how to install: 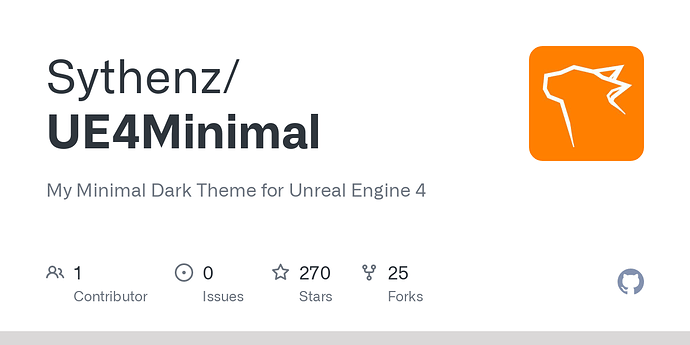 My Minimal Dark Theme for Unreal Engine 4. Contribute to Sythenz/UE4Minimal development by creating an account on GitHub.

EDIT: There is also a bug with Color_fill, and the coloring of Node headers (Certain nodes fade from color to a grey, the underlying layer on some nodes doesn’t color) - I’ve reported and am dealing with Epic Support on this!

ABOVE EDIT UPDATE: Epic have also determined a verdict for the underlying layer on Node headers that don’t adhere to color (Not the color_spill, but the underlying layer), they have said that this works as intended, and that it can be colored by changing Node title colors in Editor Preferences - despite my argument that it does not.

Also updated the About splash of Unreal with their new logo, and new facebook logo - Credit to @EXGAMESADRENALINE here on the forum for the original inspiration <3

Just wanted to say thank you. The original theme has always repelled me from learning Unreal in some way. Might look like a trivial detail, but it feels much more easy on me this way. Kudos!