I’d like to make a serious case for the reintegration of launcher categories, which were removed around version 4.26.

For folks who don’t know what I’m talking about, in versions of UE4 prior to 4.26, you were able to view and sort UE4 project files according to category tags, which could be edited in a given project’s config files (I believe). In practice, this meant that the launcher could have projects sorted like this: 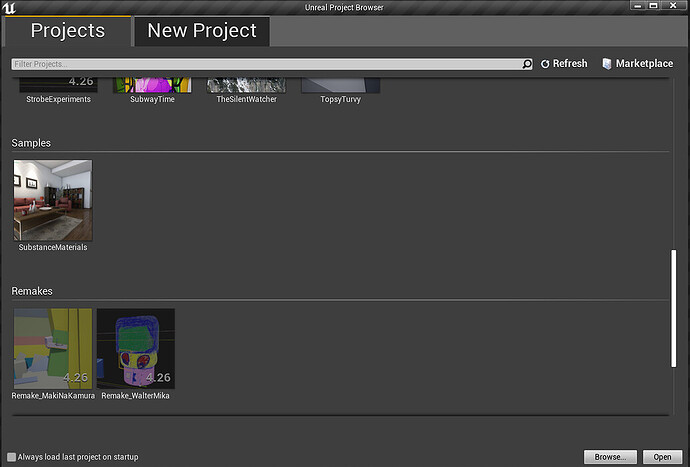 You’re no longer able to do this. Let me explain why this is a serious problem.

UE4 is increasingly being used by people who are outside of the video game industry. This means that UE4 needs to be usable in many different kinds of pipelines, not just those that are most common in video game workplaces. That is, it cannot be assumed that someone will predominantly work in the same project file, as is often the case in video game development.

Personally, I’m a fine artist working outside the video game industry; in a six-hour period of work, I jump between 3-7 different project files, and sometimes create two or three new project files in a given day. This makes for an enormous amount of project files that are now basically permanently disorganized.

this is a serious problem

EPIC: Please stay on the line. Your call is important to us.

Did you get a reply to your other thread about this? If not, Epic DGAF. The UE forums are a wasteland (just for talking to ourselves). You could email the MP team directly? But if this is a permanent change rather than a temp bug its unlikely to get looked at. Example: The 50 item wishlist took 7 years! Workaround: Manage all the assets outside of the Launcher.

Honestly, this is super good to know. Thanks! Also, if it were easy to simply "manage all the assets outside the launcher

" then I probably would’ve done that! In any case, I appreciate this kinda macro perspective, just good to know about.