I update UE to 4.15.2 and now when i open skeletalmesh editor everything crashes
This is my log

In order to assist you we are going to need more information. Could you provide the following:

Once you provide that we will continue this investigation.

Hi, Ed!
I got same problem. I opened stock mannequin mesh, and it crashed instantly. I’ve submited report after crash, my login is MaxDBlack.
here are some logs:
log
xmlLog

I don’t know if you need minidump file and not sure where to find full callstack.

Thank you for the reply actually when I’m asking for the Epic/Login ID what I’m looking for is this information in the crash reporter window. (I know it says machine ID but as of 4.15 it is now loginID) 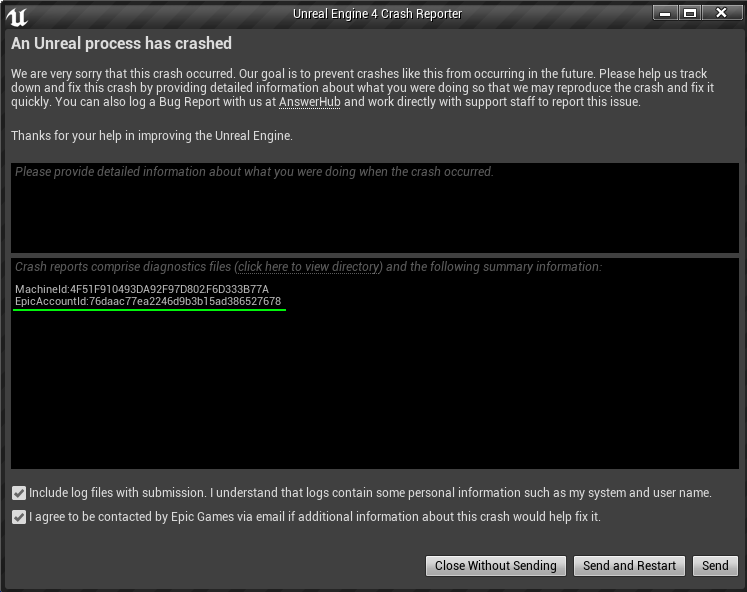 I was having the same issue. After a lot of reading and playing, I was able to resolve it (in the form of a workaround) per this ticket’s suggestions: D3D Hung Ticket

In my case, the final resolution was to create a shortcut for the UE4Editor executable. I then added the -opengl4 switch to the shortcut so that it forces it to use OpenGL4 as it opens the editor. Note I also included the project path/name so that it opens my project each time. For the hell of it, I also told it to run it as admin. I’ve launched it about ten times since then and opened skeletal meshes and every other type of editor with no issue.

Using this method, you can launch the editor directly via the shortcut without starting the launcher program.

Best of luck with it.

I found another workaround, which sounds a bit easier. You just have to switch realtime thumbnails in content browser (bottom right corner of content browser window, where the eye icon is). But first if your project doesn’t even start (aw it happent to mine), you might have to delete C:…\Unreal Projects\YourProjectName\Saved\Config folder, or find a setting in config file and change it there

I have a similar problem in that my Unreal crashes typically when working with materials but also sometimes with meshes. When I have a chance I’ll try the workarounds suggested and respond back with results.

Yeah the reason I wanted the callstack was to verify if this was one of our D3D crashes. Right now we are still investigating this issue and are working towards a solution. All of the workarounds provided in that ticket linked in ephdot’s answer are what we know so far.

I apologize for the inconvenience.

Thank you so much for this! Couldn’t even open my character blueprint without having Unreal 4.15.3 crash on me… and I’m not even kidding.

For what it’s worth, I have had FAR less crashes since rolling back all updates and re-installing everything (including the launcher) from scratch. Still have a crash from time to time but at least now I can actually make progress on a project - probably once a session now compared to once every 5 minutes previously. Also I’ve notived that my SketchUp instllation has started crashing with the latest update and it’s also related to the Intel 4400 graphics & NVidia GT630M interaction. I appear to be on the latest drivers for both, so not sure what exactly the problem is.