So I imported the animation starter pack into my project and used the premade character blueprint. When I go to jump without moving it plays the jump animation fine, but when I am moving and I jump and then stop moving, it proceeds to play the jump animation while moving then play the stationary jump animation after. Anyone know why this is?

To your first question: I can’t remember the exact reason, but I think its something like that your animation is going back to the run state before it is out of the air, causing it to play the animation twice.

For your second question:

In your character blueprint, there’s some things messing with your jumpZvelocity… remove those, then on your movement component, set jumpZvelocity to whatever you like.

Why does EPIC release stuff on the marketplace that doesn’t even work properly? I tested it on an empty project and used their premade blueprint.

To get jump looking right, I added a Notify towards the end of the Jump animations (same Notify for all, ie “Jump_End”). Then I made some other changes, images of which I am attaching. I think that’s everything. The only problem I haven’t gotten to yet is that there is no falling animation either, so if you have more distance to fall after the jump animations run out, you just perform a jog animation and it looks pretty stupid. (And I agree that there is a bit of sloppiness, to UE4 samples/templates/etc in general). Better than nothing though.

Hope all this works for whoever needs it. 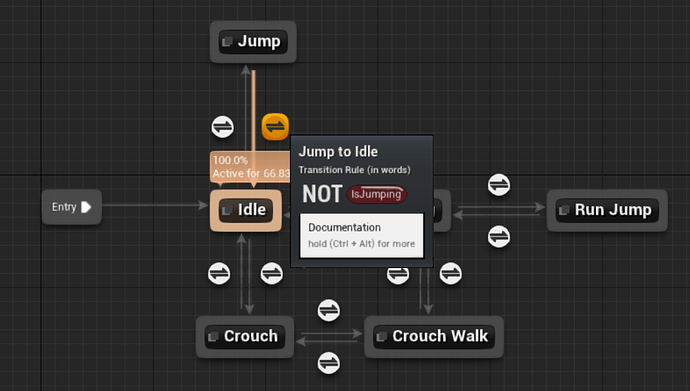 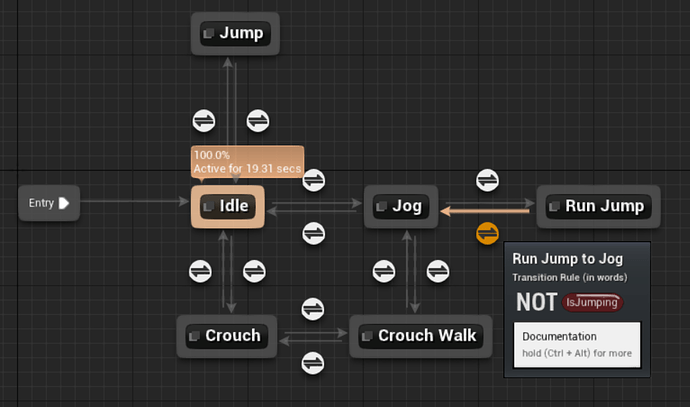 it’s an issue, but it’s “Free” content for you to do things with, not as much to just give you a cookie-cutter solution.

In order for any character to jump you firstly have to create a proper state machine for the action of jumping.
This means adding in 3 states with a start, a hover, and an end.

One can easily split the 38 frame animation for standing into 3 different parts and create the state-machine with that that uses the animation the correct way.

Another issue btw is that when jumping you add speed, so the default blueprint was never using the idle jump animation at all.

even with and aswer i still dont know what to do to stop jumping!