You can get the SteamCore:: plugin, it includes a fix for 4.25 that enables you to use steam in Standalone.

You can get the SteamCore:: plugin, it includes a fix for 4.25 that enables you to use steam in Standalone.

I think paying 80+ euros to have this fix is a bit too much. Useless advice, honestly.

Scroll down to bottom. Link suggests adding game to steam library. This worked for me, I can bring up steam overlay.

Using 4.25.3. Built game as Shipping. Have subsystem and substeamSteam plugins enabled. And DefaultEngine.ini has the code that the documentation offers.

I had your same issue, I think I solved it by moving the steam plugins from the UE Engine folder to a Plugins folder in the project directory. I’m not sure if the same would apply to you.

I can’t find anywhere any info on how we are supposed to setup the Steam plugins, so I’m not entirely sure that I did something that makes any sense, but it seems to work!

Can you please elaborate on what folders you moved to the project?

Doesn’t seem to be a lot of good news in the 4.26 release notes regarding improvements here. Anybody try it yet?

When I right-click and Launch Game off of my .uproject per roxa’s tip, I can get the Steam overlay to come up, no problems there. But if I package it as a dev or shipping build, I get nothing at all - unlike OverRated’s experience. (And nothing from the editor, same as everybody else). It doesn’t work trying from an elevated command prompt either. I’m a little confused about where to put the “-game” switch… Are you guys talking about in a shortcut to test in the editor, or on an actual build? I’d like to get Steam running off a packaged game where I can send it to others to help test multiplayer, and not just playing / launching from the editor binaries… that’s a giant mess.

Im getting the exact same symptoms. Im not sure where to go from here. Has this been resolved? If so, how ?

There is no method that could help me. Maybe I did something wrong.
But if you still have problems with getting Steam-overlay working in Standalone, you can use my free simple editor plugin that fixes that
Just place it in Plugins folder of your project (If it doesn’t exist, then create new one)
Download link

1I2Hawk is true couse if you will go to unreal projects by default its in documents and unreal projects my project folder and then myproject.uproject right click it and then click lauch game and it works perfectly

BRO SAME!!! They’re not telling ya where to put those things and I have the same problem.
It works fine on right-click → launch game on .uproject.

It is very annoying.

Seems like Unreal Engine version 4.27 has a fix integrated in from the official github fix commit resolving the issue UE-92985 discussed above.

On the project I am working on right now (UE 4.26), I am dealing with this exact issue and I don’t think I can upgrade to a new Unreal Engine feature version right now as it might break certain assets we are using. I’m hoping this change gets integrated into a 4.26.4 update down the line because those updates are meant to include fixes only and don’t break compatibility which is what I am afraid of when upgrading to 4.27…

So far I am using the workaround suggested by @ANameTooLongToFi by adding the -game command arguments in visual studio and it works totally fine if I’m logged into Steam.

Another band-aid fix I found that works is creating a shortcut that launches the UE editor on the uproject with the -game flag. 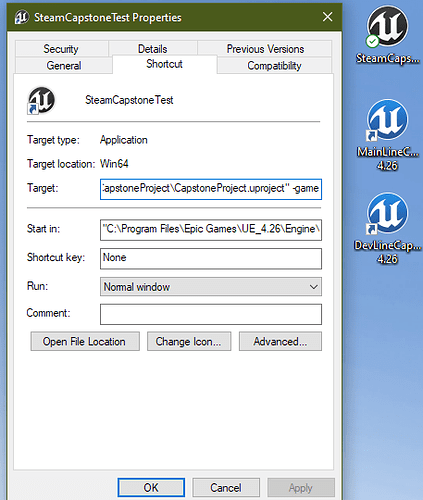 Hope this helps some folks out!