This may sound embarassing, but let me explain
When I heard about this new UT I run here. After a bit of concern, I started to watch tutorials and documentation for the Unreal Engine 4.

Now let me say: I used only the first Unreal Editor, so the first engine I guess.

What I want to know: where the 2D Shape Editor went? I remember making cool curved half way with it, using the functions like extrude to point or revolve. I’m just confused: how are you now supposed to make a “complex” geometry with only the basic tools like cube, cone, sphere? Yeah you can “free form” the brush, but it doesn’t feel the same way, I always loved working on viewports mode.

Maybe I have no idea what I’m saying, but hopefully you understood me. So, long story short: how do I make a curved hallway or some fancy complex geometry without the 2D Shape Editor?

Even if the 2d shape ed would be there, brushes are really bad for smooth curved geometry. There is no smoothing, it is too blocky, and so on. And if you don’t make curved corridors you don’t need the 2d shape ed. Regular corridors can be done with normal brushes also.

The shape ed has been out of the picture ever since UE2, in favor of meshes.

Woah Hourences, these forums are bringing back some legendary names lol ^^
So meshes replaced the thing? Now I have to learn also a 3D modelling to program to map?

Thanks for the answer

You can do simple geometry in the UE4, but it is not suggested, because it doesn’t have a good performance and you are pretty limited -> so yes, you should learn a 3d program. I personally would suggest you blender, because it’s for free

Oh fine. So let’s say I want to make something like this 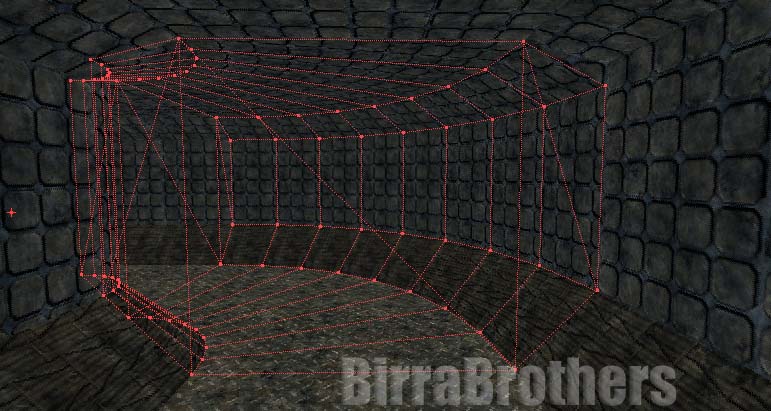 You say I should create first the piece in a 3d software? How would I go to connect it to the rest of the maps, the units, etc.

I think I need some documentations for this, I remained at UED1

Something like what you can see on the picture is possible, but as I mentioned, BPS brushes shouldn’t be used because of the performance and other reasons.

I just made this in some few sec. so that you can see that it is possible: 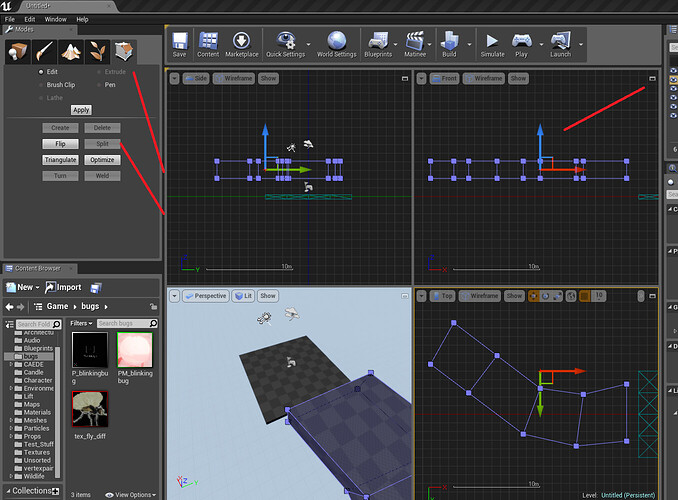 Cool, thanks Fighter.
So let’s say I want to learn the modern method, since it seems like BSP brushes are not a thing anymore.
Where do I start? Any vid/documentation and more about meshes?

Thank you for the patience

Do you want to start with blender? Because then I have a good video series for you

Cool. So let’s say I’m up to make a simple arena map, just for fun.

Two rooms and one curved hallway. I know that the two rooms, as long as they are simple and not overcomplicated, can be done in the editor itself, but for a nice hallway I’d want to make a mesh in a 3D program, am I right? Fine, so I’d have to actually create a hollow shape of what I want, then export it and put it back in the engine. What if I want to change it after? I have to remake the model in the 3D program, export it again and put it again in? And how do I coordinate myself, like, I’m working with two programs, not one. I want the hallway to be like this and this, but when I get into the external software I have no reference of the other two rooms.

D.amn it just seems complicated but I guess it is so easy. Or maybe you just do everything in the 3D program?

Look at this screenshot (http://www.i4games.eu/img/maps/ut/dm-fractal.jpg). How complicated would it be to make something similar? And how much should be done in Blender and how much in UE4?

Sorry for the stupid questions, really. I’m just trying to get all the informations I can before I actually pay for the engine

You are not able to edit static meshes in the UE4, you will always have to go back into the 3d program. You can nearly do everything (except of the material setup and the collision -> for the collision it is the best way to use the 3rd way that I show in the video) in blender, because otherwise (when you use static meshes and bps brushes) it gets complicated

Here is the blender tutorial series: 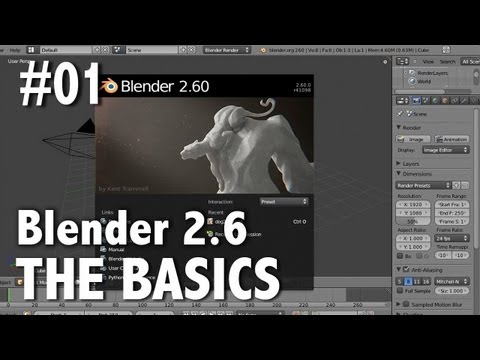 Ok, no engine for me
I sincerely hope they release some sort of Unreal Editor simplified, why can’t we go back to UED1? It was so simple once you learnt it…

Thanks Figther, see you around

It was so simple once you learnt it…

Trust me, it will also get pretty simple when you have a little bit experience with blender and you can create nearly everything it

And when you are a little bit in game dev. you wont stop, because it’s pretty awesome to create games/assets

Do you know if there’s documentation/vids about any 3D programs (Blender’d be fine) about creating an actual map/level/arena in it?
Because it seems like the Unreal Editor is there only to texture the shapes, lighting and add details, while the big part should be done in the 3d part… The layout of the map, got me?

You can do the entire blockout in UE4, I believe that’s how Epic does it as well, step 1 in this picture is how far just UE4 buy itself will get you.

Thanks Zac, I saw that Temple and it looked indeed awesome. But the layout is fairly simple, I’m talking about something a bit more complicated (curves, slants, different kind of shapes, etc)
Thank you

There’s definitely enough to get basic slants and curves, enough so the level will play basically the same as a polish version. But they might not look or be as smooth and tight as you want it. There’s a lot of assets included in all the example content you can through a lot of that into a blockout.

Do you know if there’s documentation/vids about any 3D programs (Blender’d be fine) about creating an actual map/level/arena in it?
Because it seems like the Unreal Editor is there only to texture the shapes, lighting and add details, while the big part should be done in the 3d part… The layout of the map, got me?

Probably this video will help you: https://www.youtube.com/watch?v=5QXD_twk4gw

But I would just recommend you to search on youtube a little bit, because you will find many tutorials about nearly everything

Some few points that you should keep in mind:

-keep everything low poly → so not too many vertices
-for complex models you also have to generate a 2nd uv channel + proper lightmap
-plan the room/arena carefully → so I would recommend you to make some plans before you start
-create small meshes separately so that you can place them in the UE4 → vegetation, furniture,…

But as ZacD said, there is already many content in the UE4 that you can use. I would just play around a little bit with it and when you are not able to create what you want, you can always jump over to blender to create it

so how do we do curved walls? I really see no reason to do walls in an external program. A basic thing like the deformation pallet in zbrush would do wonders within this engine. I hate the idea of putting in a lot of time into basic stuff.

Either in a 3d program or with the BPS brush

Just add one (hollowed) -> go into the geometry mode -> select a edge -> click onto split -> adjust the position. Now do this several times to get a “good” result

Here are just some few pics about what you can do with the BSP brush (they are from UDK, but it’s nearly the same in the UE4): 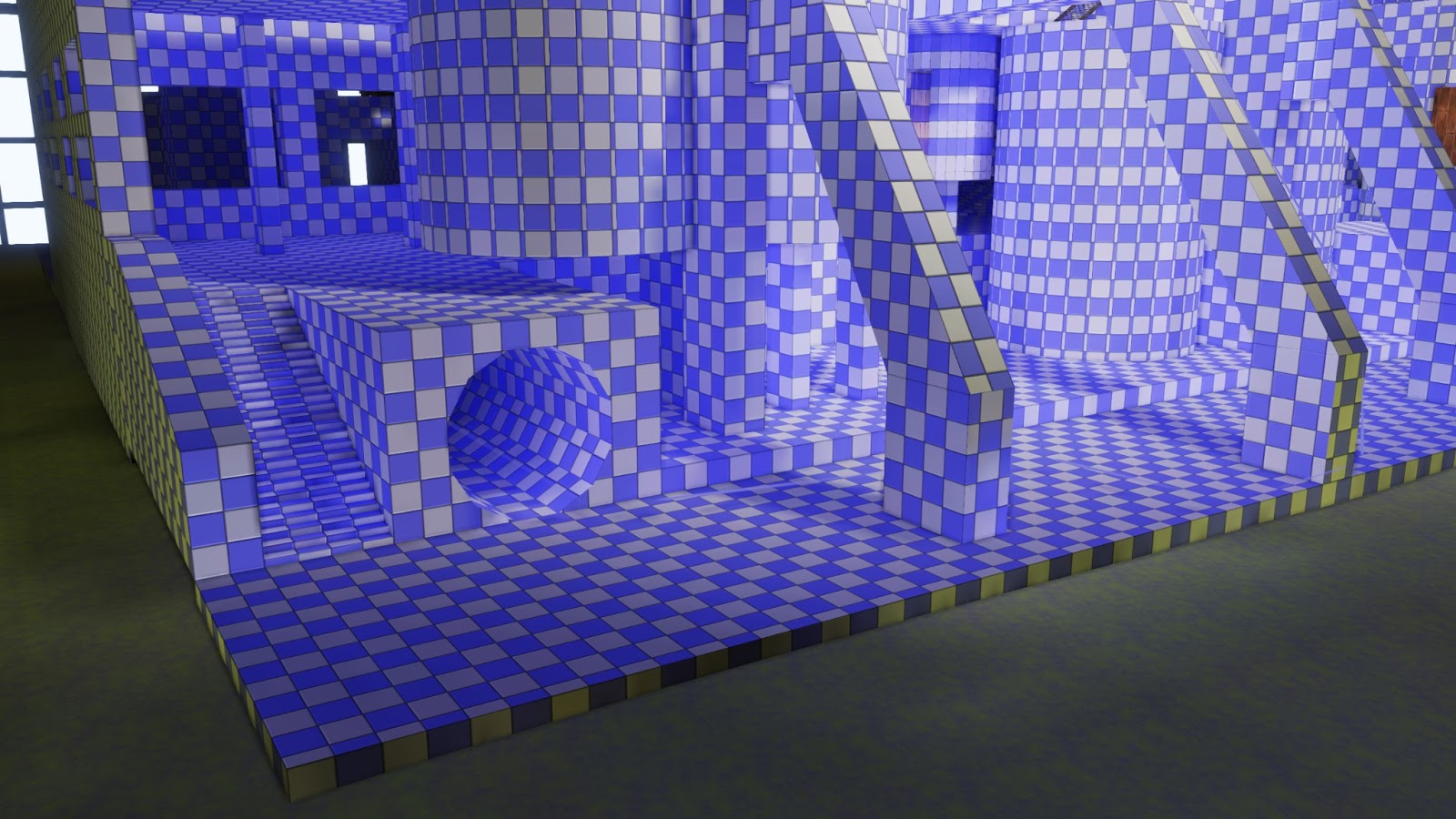 So in a 3D program we should just create the shape, then texture it in UE4 right? I mean let’s say I don’t want to use the brushes to make a complicated portion of the map, and I’m going to do it in 3D. What I do is basically make the shape and then import it and keep working in UE4, am I right? What if I have to scale it or it doesn’t initially fit in my brushes in UE4?

I fail to see a half way though: you either create everything with brushes, or everything with a 3D program, because making an arena with both would just require more useless work because of overlapping things and to coordinate everything.
But who is talking is a noob (last time I mapped was 6-7 years ago) so I have no idea if I’m right or not