UE4.26 Python 3.7 functions as blueprint nodes: what are the values for "ret"? 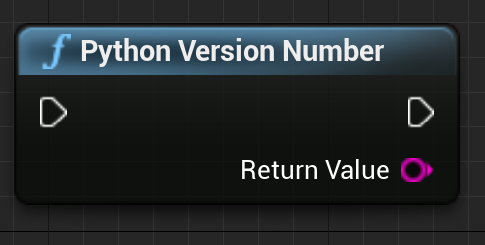 which correctly returns ‘3.7’ as a string which can be reused by further blueprint nodes.

However, the UE4 Python API documentation does not enumerate the various “ret” types; bool, int, and str were obvious, but…

Also, it’d be great to be able to give meaningful (blueprint) names to both input and output parameters, instead of “Returned value”; how I can achieve this?

Hey, I checked in with the dev team on this question. They highly recommend using the built-in Execute Python Script node to call your Python code:

Describes how to use Python in the Unreal Editor to script content production tasks.

Exposing your own functions from Python to BP is likely to end up with you seeing a lot of errors down the line.

Having said that, to answer your questions:

I do not believe there’s a way to rename the return value, though.