I´m a beginner with Ue4, and wanted to make a quite simple side-scroller game.

At the end of each room (as shown in the picture) I want to have an elevator with sliding doors.

I used the tutorial from the Ue4 website (https://wiki.unrealengine.com/Videos/Player?series=PLZlv_N0_O1gak1_FoAJVrEGiLIploeF3F&video=HJbHs_oNQsk).

Any idea how you can change this blueprint for 2 different doors which moves in the direction shown in the screenshot?

Just put 2 doors there that are connected to the 1 trigger volume and run 1 door in forward on the timeline and the other in reverse.

I would do something similar to this in an actor BP. You’ll have to modify it to fit your specific needs: 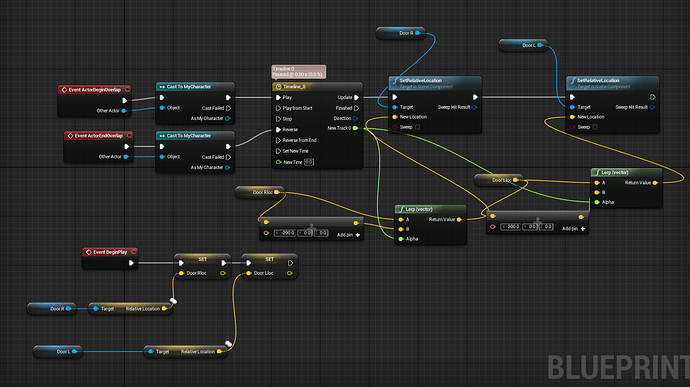 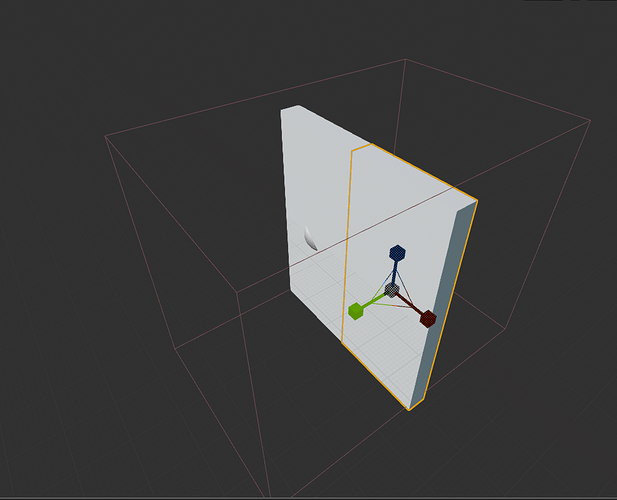 Thanks for the help, but as i am a complete newbie into the blueprint stuff, I´ll try to get more specific:

First, when you say to build this as an actor BP, would it be an empty actor without geometry, or would the actor be the doors?

Or, would this kind of BP like you posted also work as an “open level BP”?

Adam, you should show him this on tomorrow nights broadcast.

You could do it on a level blueprint if you really wanted but thats not proper practice. Just create a new actor blueprint and then put your 2 door meshes inside there

thanks, I´ll try that and give you feedbacl as soon as possible!

This is Adam (the one who posted earlier in the thread). I’m on my personal account because I prefer to separate work related from non-work related posts. As Tkfore21 was saying, I run a stream on Wednesday and Friday nights from 8pm-10pm EST where I go over blueprint scripting, specifically this is geared towards helping those who are new to blueprints. If you show up tonight and remind me I’d be happy to go over how to set this up and why I chose to do it the way I did. The stream is http://twitch.tv/Zalieth if you would like to come out. Hope to see you there!

Also thanks for bringing it up Tkfore21!

I´ve been trying to reconstruct the BP shown by Adam above, but I couldn´t “read” every node. So I need help on the highlighted one on the picture below:

First: left bottom one (the yellow one, "target-----relative location). What is it and how can I place it?

Second: the variable “SET” (I can imagine it´s an “promoted” variable from the one to his left)

Third: the “track” in the timeline node: I understand that the relative movement of the doors is controlled by the vector nodes below (with +200/-200), but I then I don´t now how the track itself looks like (is it a vector track or something else and which values must it contains?).

Sorry for my simple english, I´m from germany, hope you understand me nevertheless.

I recognize further that I need to get all this basic Bp-tutorial, for better understanding of all the functions/variables etc…since the whole “programming” process is new to me

I´m a 3d-modeller in the car industry, but love the idea of getting into the game-stuff

Hi Pajoo here is a tutorial showing how to set up elevator style sliding doors.

I went over this on stream last week. If you’d like to watch the video for it, you can find it here: Questions and Answers! - YouTube

I just watched your stream, and thanks a lot for the help! Never thought somebody would really take my little beginner problem and make a stream out of it! It was perfect!

Happy to help, if you ever need assistance stop by the stream, Wednesdays and Fridays at 8pm EST. I can’t promise I’ll be able to figure out the error, but I can say that I’ll at least give it a shot!