like many of you I have been struggling with exporting animations from Blender and use them with the Epic Skeleton. Luckily the new retargeting tools for 4.5 have probably resolved that problem: Update
Since there are several bugs when using the binary fbx exporter, use ASCII instead:

Also be sure to apply this fix:

Last updated: June 24, 2012 Tools used: Blender 2.63a. May 2012 Unreal Development Kit Beta. Optional: FBX Converter. Before you begin: Be careful with your scale. As far as I am aware UDK treats a…

btw sorry if this is the wrong forum, but I figured this is where people with this problem look first

Woah, thanks a lot. That’s very helpful. I’m really impressed at how awesome this community is

You said “instead of directly importing the structure, I have modified it”. What exactly does that mean? Did you import it and then moved/rotated it around? Or did you create it yourself from zero, but repeating the same bone hierarchy as the original?

if you import the example skeleton into Blender the transformations are completely wrong (on the right), I straightened them out (left) and added a bunch of constraints. However reimporting the “correct” version into UE4 always messes up the animations, even when using the (old / non rig) retargeting system. 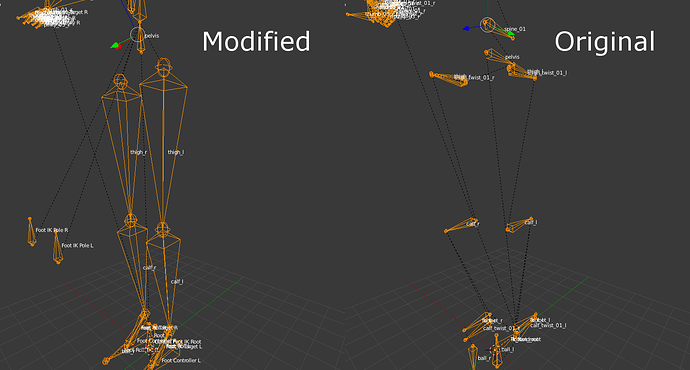 As for compatibility: With the new system you can take the animations created in Blender and recalculate them to fit the default skeleton. Animations created with this rig will not directly work with asset store animations or vice versa, but once you have retargeted them it should not be any problem to interchange them between characters.

The IK targets are purely for the animators and do not have any relevance inside of UE4 (as far as I can tell), they won’t port over, but I don’t think they are needed anyway. If they indeed are necessary I could add dummies, though.

That’s exactly what I needed to know, thanks a lot!

Attention! After further testing it turned out that the fbx binary exporter has a few serious bugs which result in translation and rotation errors:

In order to fix that you need to use the ASCII exporter instead:

However before using the ASCII exporter you also need to apply a fix that has been around since UDK times, otherwise the exporter will add an additional root to the whole scene which breaks root motion:

Last updated: June 24, 2012 Tools used: Blender 2.63a. May 2012 Unreal Development Kit Beta. Optional: FBX Converter. Before you begin: Be careful with your scale. As far as I am aware UDK treats a…

Open “C:\Program Files (x86)\Blender Foundation\Blender\2.63\scripts\addons\io_scene_fbx\export_fbx.py file” (Back it up first).
Around line 2546, you should find the following:

After applying those fixes I have had no wrong animations anymore.