If you’ve ever played TRIBES you probably know what inheritance is. Here I show a demonstration of 0%, 50% and 100% inheritance and of course, how you can do it using blueprints. Enjoy!

Notes
The collisions are a little buggy with my character capsule so that is why at 50% the projectiles were exploding, not because I was moving too fast. The speed I would need to reach is 354 KM/h to hit my own projectile.
@ 12:50 I meant Local space.

Here is a screenshot of the blueprint modifications. The video will show the rest. 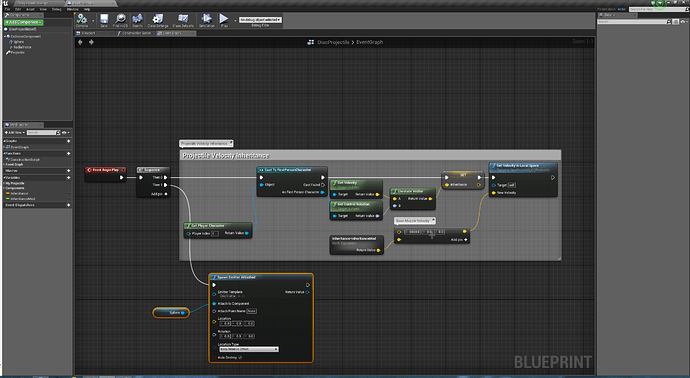 Ha! Looks like someone else has the bug. First thing I did with UE4 was throw in some Tribes mechanics.
So, what sorts of features do want to put in your fpsz?

I don’t really know, to be honest I’m doing this just to learn and share what I learn with others. I’m trying to re-create as many of the mechanics as I can, it’s how I learn and create new ideas. Start with something that exists and build from that.

I already have a fully functional energy system with energy recharge, a jetpack with Z and lateral thrust plus energy drain. A kind of broken version of skiing, I need to make a custom movement mode for skiing and script out the physics to act the way I need them too. Weapon switching is in but I didn’t show that in this video. I have 3 weapons so far (Disclauncher, Laser Rifle which is Hitscan and Chaingun).