Trying to understand the most basic UE4 Casting Tutorial

I have followed this tutorial example:

A How To Guide for Referencing Actors in Unreal Engine 4.

…but when I try to drag P_Fire onto Target Blueprint it says emitter object reference is not compatible. Casting/referencing will be the death of me.

The set nodes are not a ‘general’ thing, they have to be dragged from the target variable. You can’t drag onto them.

Have you tried that?

I believe it to be the case. I have been dragging off of “As Third Person Character” and then typing “Set Target Blueprint”. (There is a variable created in Third Person Character called Target Blueprint with a variable type of Blueprint Effect Fire). I then drag off of the previously referenced P_Fire actor (which is in the level) and onto the Target Blueprint object input on the Set Target Blueprint node. It looks like this is what they are asking in the instructions unless I am misunderstanding them. It’s tough because they skip steps (like the casting to the Third Person isn’t in the instructions) and their images aren’t specific to the tutorial their showing (they tell you to set the reference for the fire actor but the image shows them set the reference for TargetBox and the reference they connect is a smoke particle all of a sudden when the whole tutorial mentions fire lol) I’ll attach the snapshot from the page. Thanks Clockwork! Your support in this Q&A forum has helped me many times!

Your mistake is to try to connect the emitter as a blueprint. 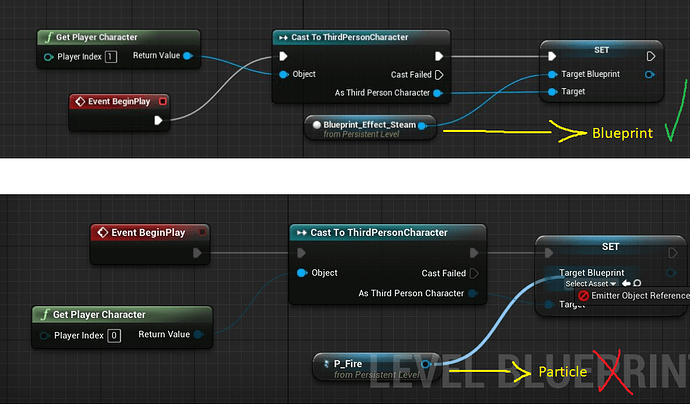 Don’t they use that P_Fire as the example though in the instructions? I dragged that P_Fire into the level as they did. and selected it in the level per the instructions then went into the Level Blueprint and right clicked and selected create reference… It didn’t create a Blueprint_Effect_Steam it created a P_Fire…Where did the steam come into play? How are they linking the blueprint effect steam into the target blueprint when its a blueprint effect fire object type? This is baffling me. I am so sorry if it’s something simple going right over my head! 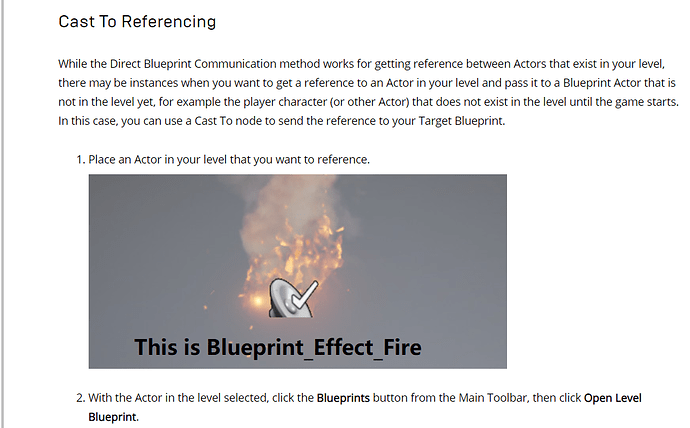 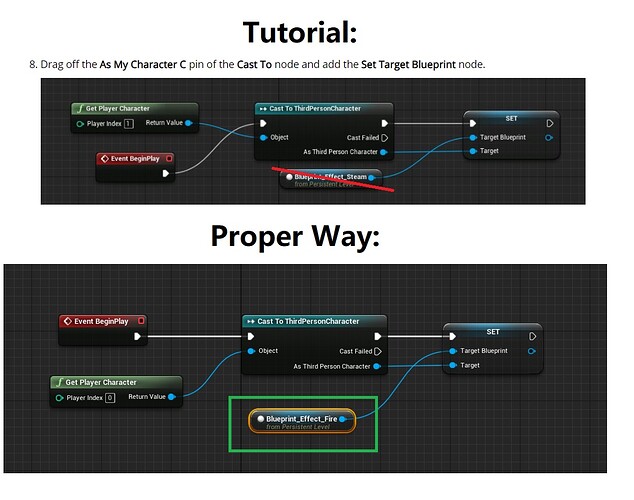