Trying to get a camera to move/teleport on key input?

Trying to get the default camera to move/teleport on a keystroke, but it’s not working.
I’ve attached the view port to the desired camera, and even tried attaching the camera to a target point, and moving/teleporting the target point with no luck.
Help?

So to confirm, you have camera attached player for example and you want to teleport the camera alone and leave player behind?

So to confirm, you have camera attached player for example and you want to teleport the camera alone and leave player behind?

There is no player, or more specifically, a player start actor.
There is just mesh that’s rotated via mousewheel up/down (I got that part working at least).
The flying camera can be moved via wasd as usual.
So this is more of a presentation/turntable scene.
No game play, no other characters.
So the entire scene is really bare.
Just a mesh, a material, skylight, and a directional light.

The only other workaround I can think of is to create a package for each camera angle, start them with the DUMPMOVIE command, then combine the frames from each package, but that’s a lot of packages.
I’d rather have just one which the camera angles can be changed.
Or even better, for the DUMPMOVIE command to work on command so I can just choose whatever angle I like to render.

ok, I found this image on this blog:

Environment Artist.com. I am an Environment and Prop Artist in the video game industry since 2005.

It works!
I just ignored the event start and cinematic mode nodes. 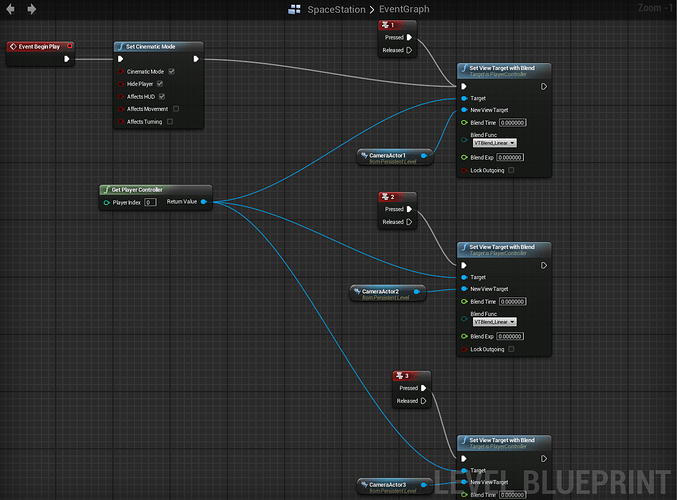 Now I’m stuck with something esle.
On event begin play, I need the two meshes to rotate, but the node can only control one mesh at a time.
when I plug it into mesh 2’s rotate node, the first line disappears. 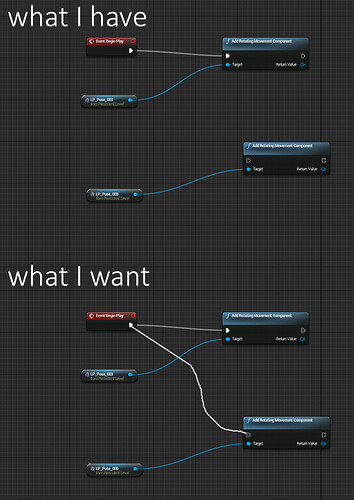