I have over 40+ trigger boxes in the level blueprint that are all written correctly, they all trigger perfectly in the editor window fine. However, in the stand-alone and packaged game one particular trigger (trigger 50) leading to a sequence was not triggering on the first playthrough, if the character died and the level reloaded it worked but if not it failed, after weeks of deleting replacing etc I could not figure out the issue and so I deleted that particular trigger and seq from my game, However now it has fallen back to the same issue on the trigger before this trigger 49, its as thought the game need to have one trigger fail like this first time through, I tried deleting this trigger (49) to check and what do you know… it then started failing on trigger 48 first play through (only in stand alone and packaged game). also once this trigger fails it then makes all the rest fail afterwards.
Must be a bug, cant for the life of me figure it out. 4.26.

Thanks for getting involved, unfortunately its not the last trigger, I made all boxes visible and it does show in the packaged/ standalone game but still does not trigger, ive tried setting to overlap only pawn and all sorts but no trigger.

There are quite a lot of strange problems people have after packaging, I see on here.

It seems to come down to the same thing, something isn’t getting packaged.

I don’t know exactly what’s going on, but the code that decides what to put in the package is missing some dependencies somehow.

To verify this as the problem, make all your collision boxes visible and package ( not sure if they remain visible, you might have to do something like include a marker ). Do you see them all in the packaged version?

Also, there’s a pattern here, maybe you could make a 51st box. I know it’s a bodge, but…

Hmm, not sure then, I’m afraid.

Are the trigger boxes controller by the level BP, or are they blueprints themselves?

And then presumably a lot of either 1 or 2 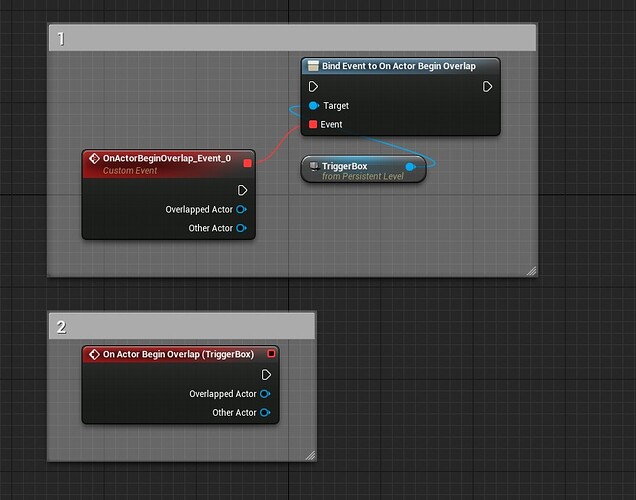 Yes all 2.
I just tried disconnecting the bugged box and lifting it into sky and replacing the trigger with a new one but then that trigger bugs out, so i dont see how it can be the trigger, which makes this more confusing… it means whatever trigger i attach it selects one piece of code to not fire

Only thing is that maybe you can replace them with blueprints ( easy once you’ve written one ), and then see if it still happens.

I know it’s not really an answer, but it would probably shift this bug elsewhere…

yeah I tried that but then they have to cast to level blueprint anyway for everything to sink, still an issue, really cant build the game without the level bp

I know we’re getting off the main issue here, but you definitely can do without the level BP

If the boxes need to sync data, they can do it via the game instance, for example.

Usually, using the level BP, will be the difficult way of doing things.

Not at all, this helps, Its clearly the level BP thats bugging out, i just tried a bp_trigger that works but when called in level bp… nothing… so your saying build all my triggers in the game instance? ive not done it this way before… any help or advice massively appreciated

Can you give me an overview?

So you have 50 triggers, each one plays, what, a level sequence? or…

What data are you syncing?

and checkpoint triggers which cast to game instance and objective actors

Ok, you can do it with a single blueprint actor, but it might be a bit of a learning curve.

When the player overlaps the box, it sends a blueprint interface message to the other actor ( same one for all actors ), which says ‘do your thing’.

EDIT: I can show you how to deal with each kind of thing, one at a time. But don’t do this unless you’re ready for a bit of a change…

You can always just switch back to your old way.

so make seperate bp_triggers for every trigger in the level, still that wouldnt let me cast to cinematics and EVDs without using level bp?

tbh Id sooner find the issue causing the trigger boxes to bug out, ive found one at present that when I overlap it then almost makes the player not visible to others in the level bp or even not in the level bp such as solo trigger bp actors, its like it turns off collision i think is the issue

To play a sequence, you just need

Not sure what an EVD is…