Trace not working on landscape splines

All,
I’m really stuck on this one, hopefully some kind soul can help me out here.

I have a river made with splines. I need to trace down the material so that I can produce the adequate effects (water footsteps, etc). The issue is that either collision does not work, or it works in a way that my character WALKS on the river (doesn’t sink in the water).

All the spline segments have the *SM_MW_WaterPlane *static mesh set on to them: 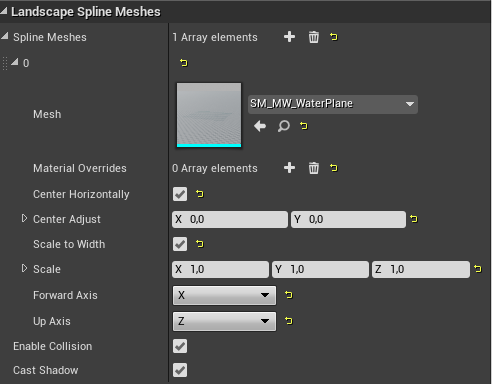 This static mesh SM_MW_WaterPlane has a simple simplified collision box and is set to ignore all collisions, besides the trace on a custom channel called “environment”: 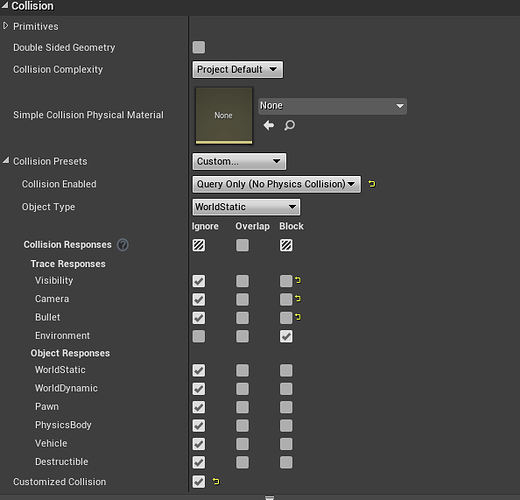 The material of this mesh is set to have water as physical material:

Now, if I place this static mesh in the world and trace it from the character’s feet with:

Then the trace work BUT I experience what anticipated: my character walks on the spline. If I:

Then the characters sinks in the river as expected, but the trace no longer works.

FYI: if I use the exact same mesh but instead of in a spline, manually set in the world, then everything works as expected: the character sinks in the river and the material of the Out Hit (of the trace here above) is correctly reported as “Water”.

Is this a known feature / bug of splines? How can I circumvent it? Any ideas on how to make this simple thing work?

Did you ever find a solution to this? I am going crazy with it too.

I ended up using a BP with a Spline component instead.

Hey, found a solution for this, which was driving me crazy as well…

Search for this node in all BP - “Add Spline Mesh Component” (for me, it was used in a function within my river spline BP Construction script).

Click this node and adjust collision settings there in the Details panel.

Greetings all! I have been trying to set up a track system for Ark but have come across the issue of not having any collision meshes on my generated spline meshes. I have the tracks generated in the editor and it creates the geometry on the fly [image] [image] But the collision mesh does not carry over [image] The static mesh that the spline utilizes does have a collision box on it …

Using these settings, my character could pass thru shallow water and get a hit result from visibility for the surface material. 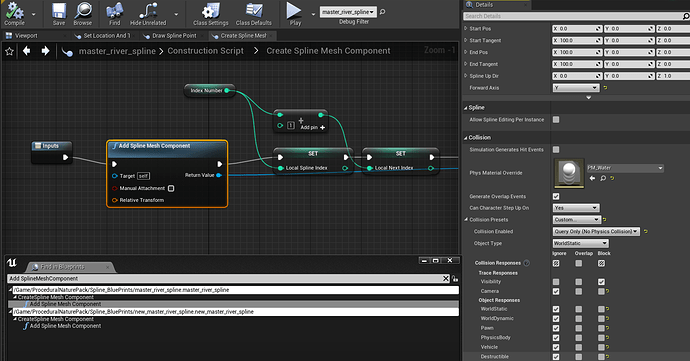 Seems the collision for a spline mesh can’t be adjusted any other way.