This topic has been covered before - I’ve read through old threads, so I’m not completely clueless. I’m looking for some reassurance, actually.

Trying to create a town sized one level that spans about 5 square km (3 sq miles), and I’m curious if the engine can handle the detail. It will have about 500 buildings, plus thousands of other props - fences, roads, trees, etc. LODs will reduce the buildings to about 500-1000 polys per object. I’m also going to cull the smaller objects based on distance.

I hope i can create the whole terrain out of multiple smaller bits and use meshes for things like river banks, cliffs or cobbled roads. I’ve managed to import the terrain from google maps for topo accuracy and will overlay the models on top of it.

Now if I continue like this will the final program have ok framerates on most computers?

Here’s a screenshot to give an idea of the scale. 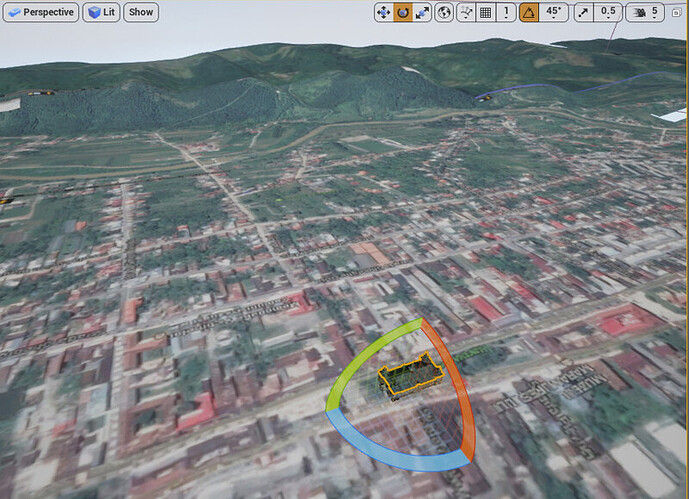 you will get definetly in performance problems if the actors in youre map are over 10.000. so for the goal you have in mind you need a clever solution for level-streaming and i recommend to do a load/stress test for this BEFORE you go into the actual production. So throw in those tons of assets wildly and see how the performance will be.

So what you’ll want to do here is lay the buildings out how you want them, and then combine/collapse them down into 1 actor/mesh for a city block.

There are multiple ways to skin this cat.

For example, you can use LODs in several levels, where it’s not just “the same mesh but fewer polygons,” but you actually make multiple houses into a single mesh with a single material, to use at a distance. Even further away, you may be able to bake stand-ins, similar to cruciforms or boxes with the buildings painted on them.

It also depends on what your intended viewpoint is. A flight simulator has different requirements from a first person shooter. If you’re always at street level, doing a lot of work with visibility zones and occlusion will help a lot, whereas if you can climb to the roof (or fly,) that’s not going to help as much.

So, yes, the engine can realize a town like this, with good frame rates on a modern gaming computer. However, exactly how much work you have to do to get the engine to those frame rates, depends on your specific needs and use cases.

World composition + streaming, aggressive LODs (so push stuff to the lowest detail pretty fast as it goes away, don’t try to keep the higher LODs visible if they aren’t right up close) and careful tweaking will probably get you pretty far.

If you can figure out how to set it up, use the actor merging and LOD creation to make single-mesh LODs of your distant level chunks.