Hey community, new here so will try to get to point.

Making mod for personal server, making a new compound bow, metal arrow, and carbon tranq arrow and hiding the stock ones with new ones in place in engram list. Wanted to know what you thought since this is first real mod, and also where in the world do i change damage the arrow does and how much torpor the tranq does?

I believe the proj_ class controls the damage amount, it will also reference a dmg_ class
so you have to make your own dmg_ class (copy the arrow metal damage type) in the damage type you can set the “torpor damage multipier” much like how the club, tranq arrows and tranqing dino attacks work.

So in your case you’d be copying:
Engram_ (2x because ammo and weapon)
PrimalItemWeapon_
PrimalItemAmmo_
Weap_
Proj_
Dmg_

Now since I gather you want to replace the vanilla CompoundBow with yours (so you can attach the vanilla arrow and new tranq version) I think you have to change the master list in the primalgamedata_yourMOD (someone correct me if this is wrong, I’d try to just “add new”) I believe doing this you have to get your mod to load first as it won’t be stackable?

Either way, proj_ for amount of damage
dmg_ for the deeper effects (torpor, other effects? add a buff?)

I’ve got a mod that does something very similar to this called Compound Bow Plus: 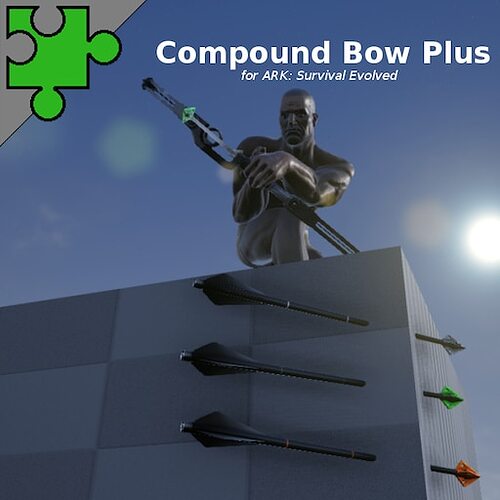 To change the damage of an arrow you need to open the corresponding ProjArrow_ file. Search it for “damage” (without the quotes) and it will show both the “Direct Damage” and (more importantly) the “Damage Type”. This screen looks something like this: 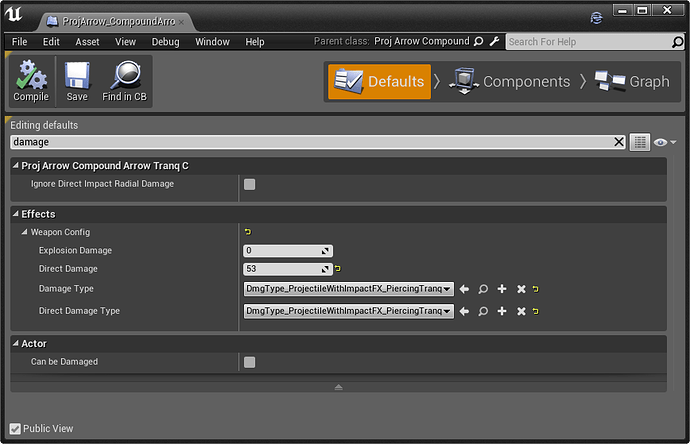 If you open the DmgType_ file (click the little magnifying glass to find the one it is currently using in the content browser) you can set things like how much torpor it does. This is the settings I have for my Tranq Metal Arrow. I have highlighted the parts that relate to torpor in red: 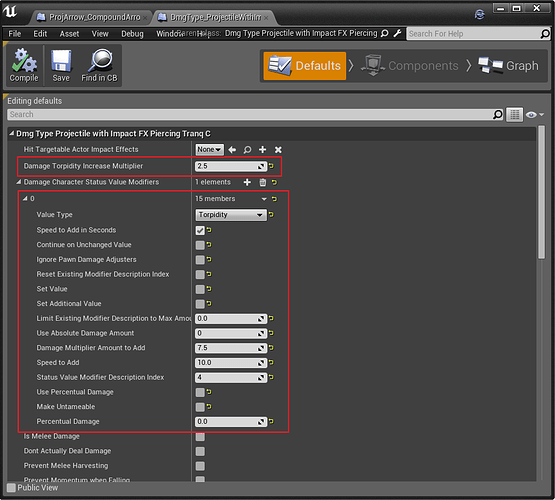 Hope that is some help! Let me know if you have further questions and I’ll do my best to help.

Awesome thanks for help guys!

Well now that brings me to a final question about this, when seeing the multiplier the rifle gives 6x damage over 5 sec and xbow gives 2x…and so does the compound bow but yet the xbow is better for taming. Read that the compound shooting anything other than metal arrows drops it’s damage, is there a way I can change this to modify my new compound bow?

Because the compoundbow can shoot normal stone and tranq arrows, which is the same as the normal primitive bow. They use the same projectiles, thus same damage, Crossbow I believe uses a difference projectile? the Xbow I think can hit harder with the vanilla stone and tranq arrows making it better at knockout. But the Cbow only has it’s own metal arrow made just for it.

As for the Longneck rifle and its darts, yeah not a bow lol. but the 6X would mean if those darts did 10 dmg it’s apply 60 torpor over 5 secs

Understood, but how do I make the compound bow do better compared to Xbow? The rifle is at 6x with the darts but damage of dart is only like 20 or something? I just want the Cbow to be better at taming and I don’t think something as simply increasing the multiplier will do.

is there a way I can change this to modify my new compound bow?

Yes, add new arrows to the compound bow that do less damage than traditional metal arrows and increase the torpor %. That’s exactly what I have done in the screenshots I provided a few posts up if you want to use my variables as a guide

Yes thanks Sleepy, as I was reading your post i facepalmed…made it a bit weaker than yours (not 7.5% stayed at 3%) so as not to almost 1 shot unconcious something within few sec.

If you modified the 7.5 down to 3, but left the initial value alone then you’re still doing x5.5 torpor per arrow (x2.5 instantly and x3 over time). In my testing I found too much torpor upfront spoiled the fun of taming and it worked better having a small amount of torpor upfront and the rest applied over time. You might want to experience with doing less torpor upfront (lower the top variable) and more over time (increase your x3 variable).

Just my thoughts! But it is your mod so do what you want

No your totally right. Other admin basically slapped me calling me stupid lol, idk why but in my mind the dinos Torpor is only like 1k or less…one of my argents are at 8k Torpor…jez at the rate I have it it’ll take FOREVER to drop it.

Side note, since I’m replacing the Vanilla Cbow and arrows and adding an arrow, should I also create BP for upgraded versions of it or does the game do that randomly with RNG? And with this, does that mean I have to now edit the Beacons to replace the Vanilla Cbow to mine? shesh shoulda thought of this…OR could I just redirect the Vanilla Cbow BP to mine instead?

Feedback from people who use the modded items is golden haha

Side note, since I’m replacing the Vanilla Cbow and arrows and adding an arrow, should I also create BP for upgraded versions of it or does the game do that randomly with RNG? And with this, does that mean I have to now edit the Beacons to replace the Vanilla Cbow to mine? shesh shoulda thought of this…OR could I just redirect the Vanilla Cbow BP to mine instead?

The game allows for upgraded versions to be created with RNG. With the spawn command if you alter the quality setting from 0 to something like 30 or 100 you will see the difference it makes. As for adding stuff to the beacons… that’s another task in itself. It might be simpler if the admin spawned in some better quality blueprints and used them as prizes for server-wide competitions or something? Just an idea

You can’t redirect the Vanilla Crossbow BP to yours without making a total conversion AFAIK.