This is a tip rather than a question. I had an issue solving this, and thought it would be useful to share.

Using the top-down example map in UE4.10 attenuation settings in UE4 are by default set to play ‘through’ the camera. Using the setup in the BP below (in this example, placed in the TopDownCharacter BP) the sound is forced through the springarm instead.

This ensures attenuation works correctly in terms of distance from source.

You may wish to force the override through the character mesh instead, but note that the source orientation will be calculated on the mesh orientation, not the viewpoint. In my scenario, the camera can rotate around the player (mesh), and I want sounds to orient themselves based on the player’s view. My camera can also zoom in.

Note: I’m using Wwise, but this solution is not Wwise specific so should work with Unreal Sound, FMOD, Wwise, and any other audio middleware. 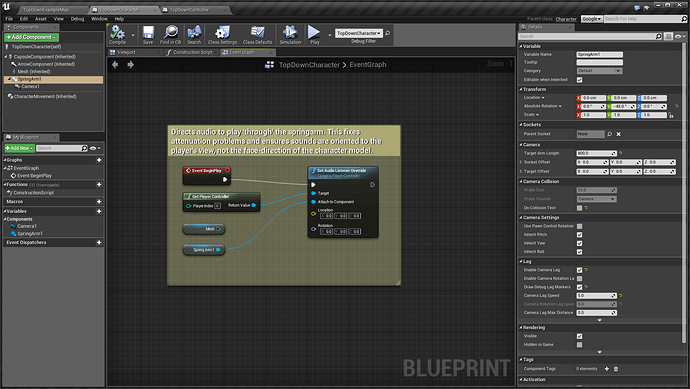 thanks for this, was driving me a bit nuts messing with all the sound concurrencies and attenuations wondering what the heck I was doing wrong… easy fix after this!