hey unreal peeps, im long time viewer, first time poster… not sure if this is the right place to post this.

anyways i made a tool for exporting from 3dsMax in a more consistent way than having to do it manually every time,
ultimate goal was a one click solution once setup correctly, hope this tool helps more than just me.

this tool saves the paths for export directly into the scene file so you dont have to reset it up and name every time, it will also save animation names and frame ranges so that you can export them quickly and easily.
ive used it for multiple projects, i eventually export everything in to one exports folder for every asset in the game, and with the new automatic reimport in unreal its pretty nice. 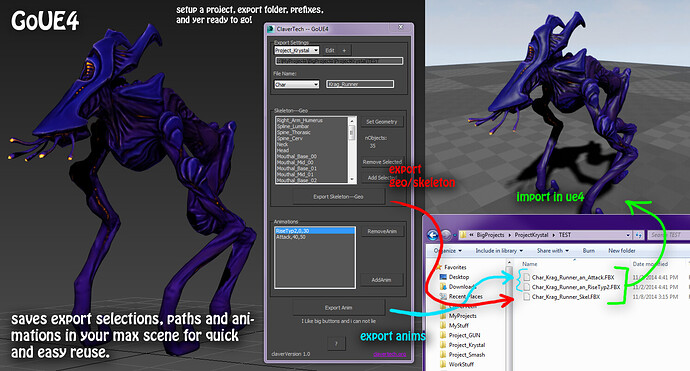 I’ve moved this to the Community tools and Tutorials section.

sorry bout the double post, didnt see it in the list and freaked out so kept mashing the keyboard and went all “crazy german kid” on it.

No worries, it happens.

Cool tool though. I’ll have to give it a run through with Max and see how it works for me.

It’s nice because it can move objects to the origin before exporting. As I’m designing environments I tend to have my peices all over the place. If you’rs had that feature that’d be amazing.

I had to modify his script to make objects rotation be taken into account as well since I often have my objects rotated as I test placing them next to each other.

One thing keen’s script lacks is if I have a group selected but I want it to be one mesh it still exports them as multiple meshes. This is a problem if my static mesh has collision geometry with UCX_ UBX_ etc prefixes.

I may need this for sure even if you don’t add those features when I start working on animated characters again since it seems like you have animation related tools in there.

so u want the script to move objects to the origin and reset their rotations before export?? i can do that, i was already doing a hold and fetch command upon export so i guess i could move stuff around just fine. if thats exactly what u want i can do it.

and i was dabbling with a export geo button that exports things as seperate fbx files, while my original export skel button exports everything as one fbx file, i also was just experimenting last night on a auto UCX button that would generate those convex collision objects based on the export geometry’s local boundary. i just wasnt sure if i should do it automatically at export time (where you wouldnt see it at all) or a button to generate them manually per selected geometry and add them to the export list. … also wasnt sure if people would even need that.

thx for the ideas, ill take a look at setting that up.

k its now updated, fixed one bug too.

it will now (via the Export Geo button) export groups as one fbx file, and will also zero out the position and orientation of the each object it exports.
tho im sure it will break if u have groups within groups so dont do that

also fixed a bug where the exportpath was undefined and couldnt be set or updated … should be working good now.

What kind of madman would have groups within groups?

The origin reset should be really useful for doing modular environment work, and hell…just about every other sort of work where you’ve got multiple objects in the same Max scene (if they’re sharing the same texture sheet or something)

Cheers for the tool, I’ll give it a go and let you know if I have any suggestions

What version of Max is this for?

What version of Max is this for?

Oh snap is it not working? I made it in max 2014, if it ever crashes please copy the text to here or email it to me. 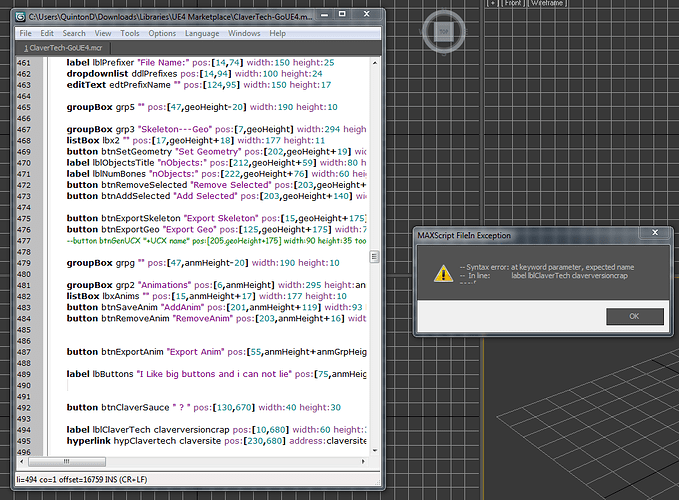 K simple bandaid fix would be.
On line 494 replace claverversioncrap with “”
And it looks like my hyperlink will do the same thing.
So also on line 495 replace claversite with “”

see how line 492 btnClaverSauce is the ui elements name and next thing is quotes for a display name… Its a custom maxscript feature to not allow variables there… Even if they contain a string. So this bandaid is just making sure it’s an empty string instead of var.

K once u have editted those two lines, save it and whilst the cursor is still active in the script press ctrl+e this will evaluate all and it should be good to go on the next try.

tell me if it works

Well now … that worked like a charm. Thank you very much sir … much appreciated. tips hat 8-}

This tool is a life saver for a Lone Wolf like me … thanks.

Thank for sharing, i will try it on Max 2013, if it will not work i will download Max 2014 (i have university account on Autodesk

Cool, y’all should send me suggestions on everything and anything u want. Little and large, and I’ll do what I can.

I’m just happy this is helpful to more than just me.

Super helpful,Thank you!
I got this error message when exporting with biped:

Edit: Fixed, had to rename my biped and replace spaces with underscore.

Hmmm, I didn’t realize it would be space sensitive, I’ll automate that fix on the next version. Thx

I seem to have permanently broken my install: 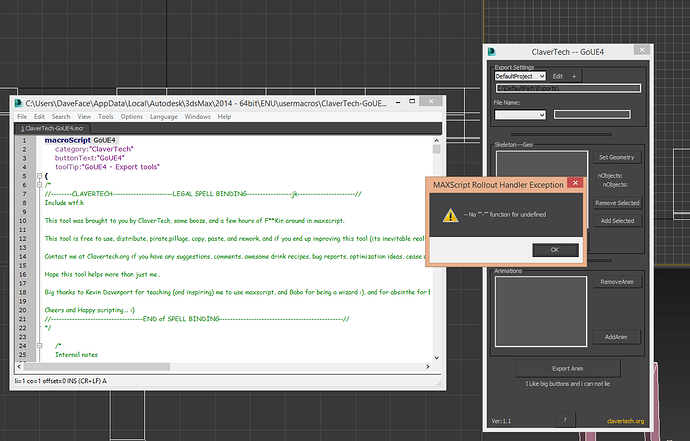 Most of the time the pop ups errors are vague as hell.

so when it throws an error click on some object in the scene and then press F11, take a picture of that.

Also make sure to get picture of the far right side of the error as that’s where it should say what line it’s happening on.