I can’t really explain WHY I decided to waste my Saturday doing this, but I did.

I took the old research I was doing into rendering the Guilty Gear XRD characters in the same appearance as they had in UE3 and decided why not map it to VR? Still don’t have things like actually attaching the head to the character but the character itself is really poorly made and not designed for this kind of stuff…

But still, setting up the IK on the arms was interesting and it looks pretty funny to see Elphelt with a VR headset and Vive controllers.

I would have liked to use FABRIK for the hand IK because her arms have a significant number of bones but sadly there doesn’t seem to be a way to set the joint target locations/pole vectors when using FABRIK so the elbows just do whatever they feel like. This is obviously not optimal so I had to just fall back to 2 bone… unfortunately it isn’t awesome but it was neat to see.

Would love to see a clear screen shot or two of your material. I am trying to recreate the shader now and a few of the nodes are hard to read. Assuming by the lack of other folks bragging they got a similar look I may not be alone. If you could include a zip of the material would be even better!

I have found something put together already: 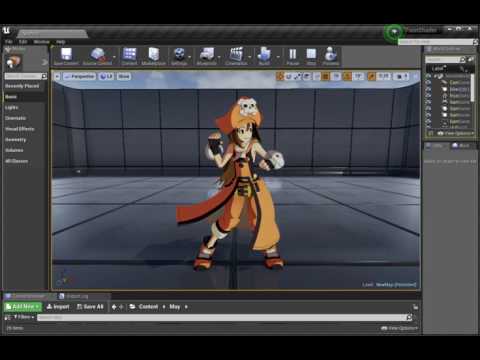 He included a zip of his material: http://www.mediafire.com/file/djaua9wy8emjry6/May.zip

Looking at May’s material, it is much more complicated with twice as many nodes as yours and I still find I like the look of yours better. Might be worth looking at though for anyone interested.

Would love to see a clear screen shot or two of your material. I am trying to recreate the shader now and a few of the nodes are hard to read. Assuming by the lack of other folks bragging they got a similar look I may not be alone. If you could include a zip of the material would be even better!

I have found something put together already:

He included a zip of his material: May

Looking at May’s material, it is much more complicated with twice as many nodes as yours and I still find I like the look of yours better. Might be worth looking at though for anyone interested.

This is the zoomiest screenshot I can get: 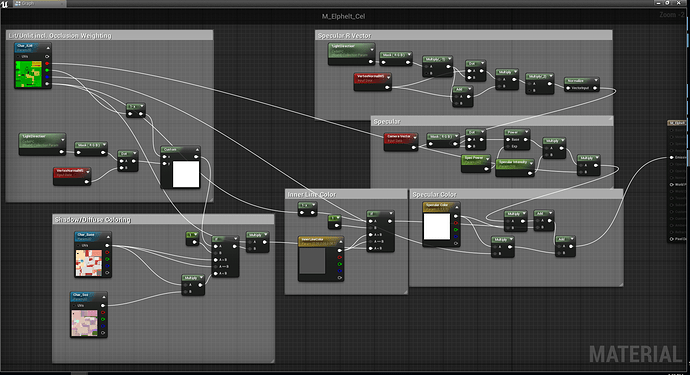 They had packed a bunch of data into the ILM texture which is why it looks fairly complicated. Each channel represents something different and I was able to decode it to figure out what they were for.
Char_Base is the obvious base texture, Char_sss defines the shadowed color.

InnerLineColor is just the color to draw the inner lines with. These inner lines are painted into the textures themselves (part of ILM) and not anything special.

LightDirection is just a vector from a blueprint feeding into a material parameter collection. The custom node is literally just an hlsl step call: 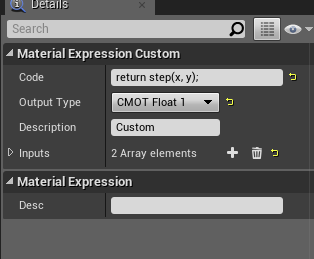 This all feeds into an opaque unlit material’s emissive node.

To get the character outline, I just have a duplicated model that uses Set Master Pose Component in order to keep the meshes lined up. The shader applied to this hull object is: 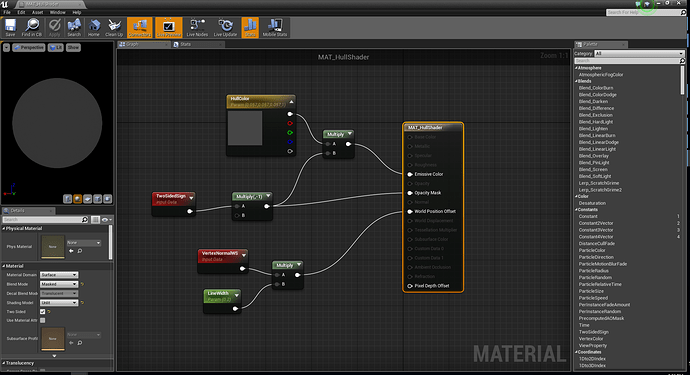 This should be enough. I was able to recreate a few characters with this and the model rips. Unfortunately I dont really want to package it up as a zip or project and release it because it relies heavily on assets I do not own the rights to in order to make sense, like the ILM texture. I could release the material without any textures but then there’s really no point since all these screenshots it can be re-made.

These screen shots are much better! Thanks!

I am little over half way recreating the material; I’ll be sure to post a photo and “I did it!” once I got it together. Thanks for the pointers!

Ok, so following what you got, I have two issues: 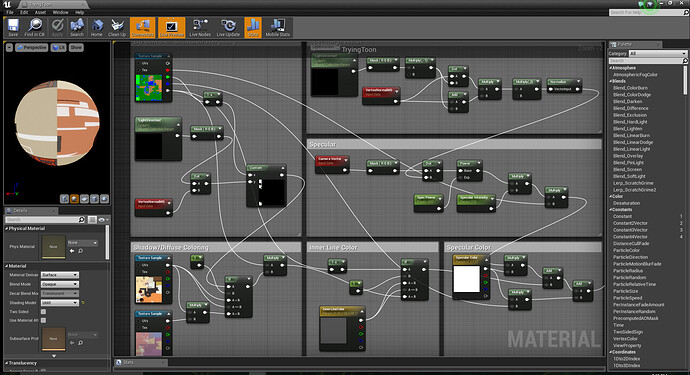 I would try to set it up with Elphelt first. I never tried it with May (Revelator wasn’t ripped when I first made it so she wasnt even an option). Some characters are just broken, like the Ramlethals I was able to rip out had broken uv’s on the body itself.

My image inputs I used before (in my SS) were Texture Samples, so I changed them to Texture Sample Parameter 2D like you, but that didn’t solve it. Other then that not seeing a difference. Might have to give this another go in the AM. I don’t have Elphet downloaded to try with (if you know somewhere feel free to PM me), so otherwise I’ll keep messing with that I got. Hopefully I’ll see the error clearly after some rest, and then from there recreate this work flow with my models.

Still digging into this. I found the cause of the white specular type lights.

Following your material exactly, I get this:

When I remove this link, I get this:

Do you know what may cause this?

Happy to have made progress narrowing down your look.

When I built the specular section I did so only using Elphelt’s model as the base and tweaked it all to get her looking as close as I could to the source. Its possible my understanding of the textures was incorrect and that the specular logic is wrong and just happens to work for Elphelt.

Thank you for your explanation. Trying to understand the logic of the material as well as I can so I can follow this workflow. I’ll keep that in mind. I tried to find some rips from the game and didn’t have anything ready to go quite as easily as May. I would have liked to test this workflow with a few different characters so I could find differences like you explained. This might just be something to do with the fact the game May is from is different, so maybe their ilm format changed. Getting closer though, so I am still thankful for all your help.

Can you share how you handled the light vector and scene lighting in general?

Do you have all lights removed from the scene, using only a single directional light?

How did you get the rotation vector out of the directional light to update the Material Parameter?

I assume in your level blueprint you just have something like this on the begin play? I am not quite sure how to pull the info out of this Directional Light Actor to pass to the Material Parameter.

The blueprint for the character just has an arrow component that I use for the light vector, and on beginplay I get the forward vector and shove it into the MPC. Being as the material itself is unlit, lighting in the rest of the scene doesn’t matter

I over thought the use of light vector literally and didn’t think of it as just a vector that emulates light direction… Thanks again for helping me to wrap my brain around this.

Hi Lawlcat, do you think we could discuss privately ? I’m very interested in your modelling skills.

It’s a great work ! I love it. Lawcat, can I send you my character.

I create a character for my own personal project, with the ilm map, sss map and base color. All the maps needed for Guilty gear X shader.

But I’m a noob yet, for material in UE4. And I would like to know if I send my character, can you update your material with my maps and share with me ?