Titanium Hound is retro-looking video game in cyberpunk genre, where you are going to pilot huge and agile exoskeleton to crush hordes of crazed security drones and abominations to uncover conspiracy carefully crafted by one of global corporations. Titanium Hound is retro-looking video game in cyberpunk genre, where you are going to pilot huge and agile exoskeleton to crush hordes of crazed security drones and abominations to uncover conspiracy carefully crafted by one of global...

Love the style. Keep it up!

Love the style. Keep it up!

Art style lookin’ snazzy, love the city in the background. I know it’s wip and hard to tell without playing it, but the enemies don’t seem to be a threat? They didn’t look like they shot at the player much, and seemed a bit bullet spongey (the things that look like robots/civilians?). Perhaps you can add in a hit animation later on as well to indicate some visual feedback when they take damage. The head things cool, reminds me of old school Doom. Last thought is maybe the music could use another few measures or so with a couple of chords to make it less repetitive, could just be temp though for all I know. That said, looks like it’s going in the right direction!

Thank you! Yeah, there is still much to be done before I could call it final at least for a demo version. 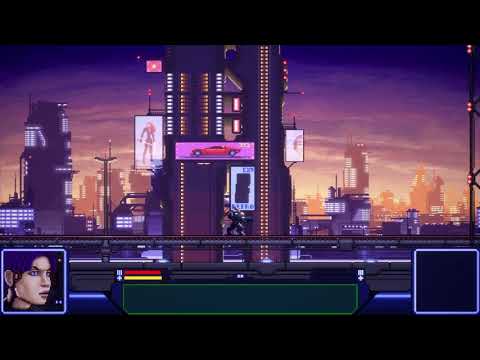 In this video I’d like to demonstrate what kind of objects are you going to see on the closest part of background. There will be more detailed structures (like this skyscraper) sliced into several additional layers that have parallax of their own to make 2D object have dynamic perspective change as if it was 3D object.

In addition to this you can see how fast Titanium Hound deals with drones using dash ability now. In order to deal 4x damage with dash and melee attacks you just need to hit your target with shock attack first. 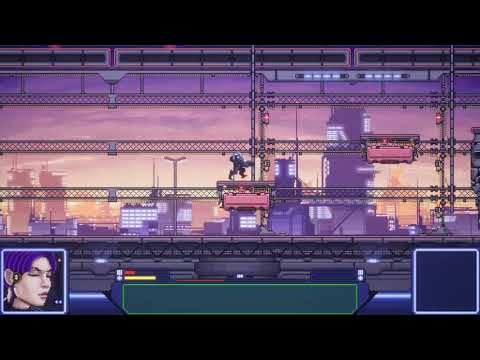 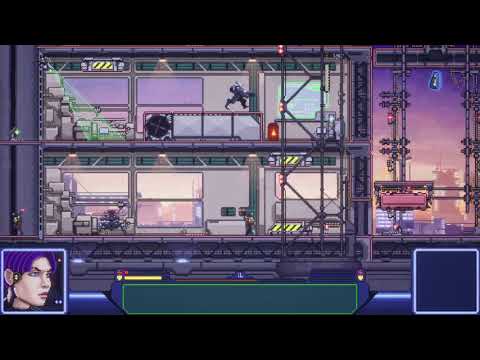 Added some more interesting stuff to the game.

Terminals now require proper keys to be used and those keys are in mini-bosses’ possession. So, in order to unlock a closed door you need to used terminal, and in order to use terminal you need to kill a mini-boss wondering not far from it. There are currently 3 equal mini bosses on the prototype level. And here I finally utilized the place for opponent’s portrait, armor and energy to the right.

Since mini-bosses added some more difficulty to the game, I’ve implemented new mechanic that drops armor power-ups from destroyed enemies and some environmental objects. They restore some portion of lost armor, but not much. If you’ll prefer to use aggressive approach to mission play through, those power-ups won’t help you to keep armor at maximum.

There are also some other small things I’ve implemented. Destroyed teleporter now drops a barrel, and you are now able to drop a barrel instead of throwing it.

Updated the first post with the most fresh info regarding the project! 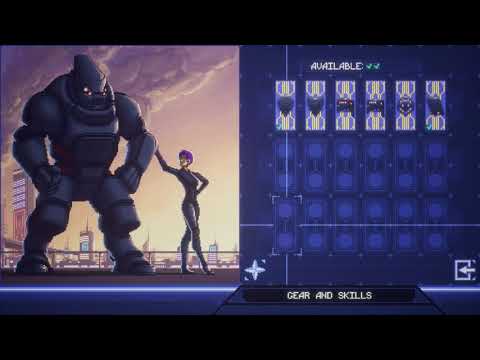 It’s time to reveal something about gear and skills in Titanium Hound. You can access Gear and Skills screen from the map. There you will see cards related to exoskeleton tech improvements as well as cards related to the pilot’s training. Initially there will be 6 cards and 2 equip slits available. As your level grows you will gain new cards and more slots - up to 18 cards and 6 slots at maximum level. You can equip and unequip any card you want between missions, but maximum number of equipped cards can’t exceed your current maximum equip slots number. 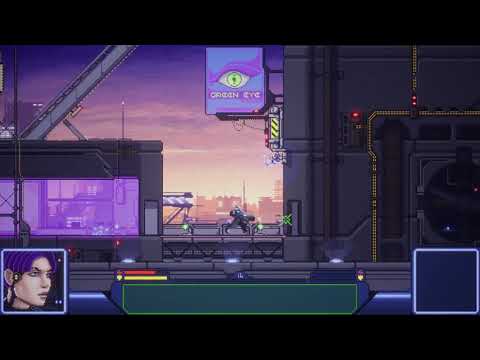 The time has come to show some new interesting things I’ve made for the game. First of all, I’ve implemented dialogue scene mechanics and first dialogue inside the mission. Secondly, mission itself now has short text briefing. Eventually such briefings and dialogue scenes will be used to form game’s story. Finally, mission now has small, but quite important additions - blocators that will stop you from leaving mission boundaries, and sight that shows approximate hit spot for main shot. 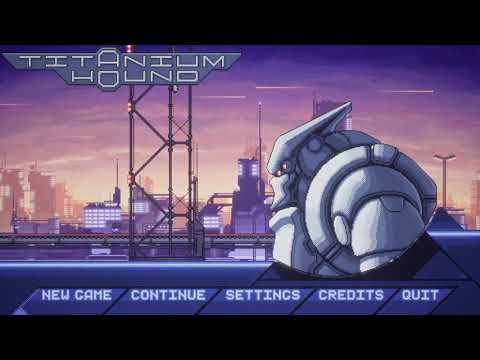 I’m ready to show you fresh gameplay video from alpha 0.05 version of Titanium Hound. A lot of work has been done since the previous version. There are more visual improvements for both mission and user interface, balance changes, working Craft system and placeholders for mission and character progression. The game still has only one playable mission, but it can be completed with following unlock of the next mission’s icon and previous mission result description. Protagonist’s level up unlocks one more crating blueprint during the mission as well as two new skills and one more skill point when you return to map after completing the first mission successfully. Also New Game button now allows you to reset your save game and start from the beginning. 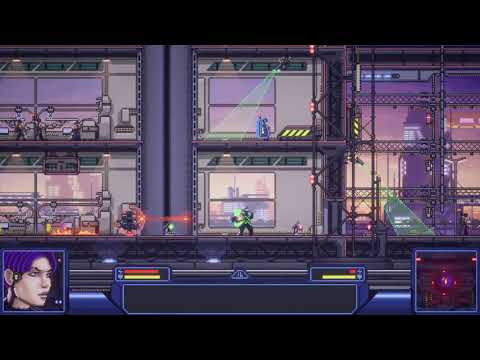 I’ve made some improvements for user interface and added fire mechanics. From now some objects will spit fire on the ground below them upon destruction. Flames will remain for some time, dealing small damage over time. Also in this video you can notice that destructible objects have better visual representation. 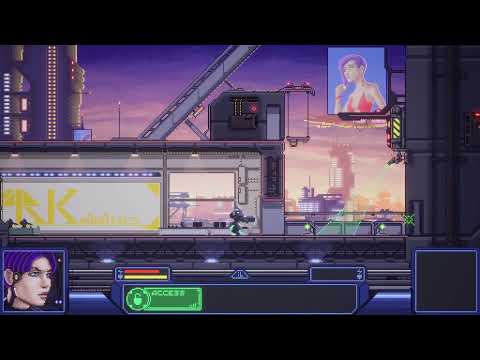 In this video I’d like to demonstrate several things. Firstly, game now has tutorial in form of tips and “how to play” slides that you can open any time on a mission - quite handy if you’ve forgot something about controls. Secondly, I’ve implemented dust visual effects and made fiery explosions look better. Finally, I’ve implemented secrets mechanic. There is already one secret chamber on available mission, and I’m going to make at least one such chamber on each mission in the game.

And one more thing. From now all regular platforms are classic, which means you can jump upon them through them, and jump down without need to get to their edges. 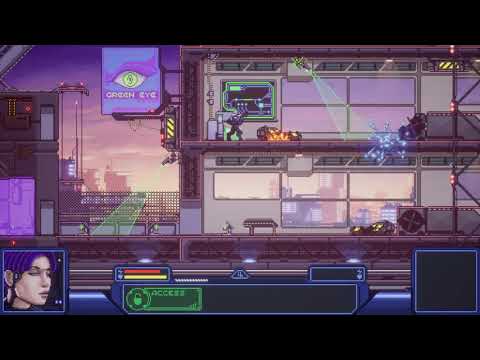 In this video I’d like to concentrate on improved jump mechanic, even though there are other improvements too, including visuals. New jump is much faster, and its height no longer depends on dash activation. In the very beginning of the video I’ve intentionally made several fast jumps and fall downs to demonstrate how responsive this mechanic is right now. Please note that dash still affects the jump’s length so you still can use this to reach platforms that are too far for regular jump, which I’ve demonstrated in the ending of the video.

This is demonstration of Titanium Hound gameplay captured on demo version 0.1.0. 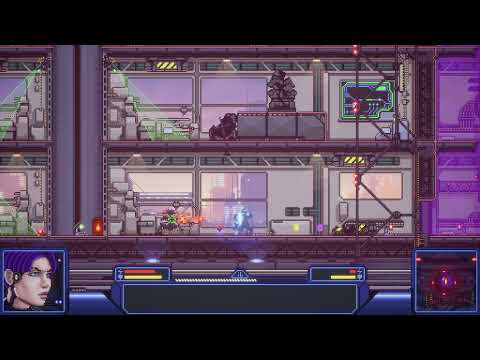 You can now add Titanium Hound game to your wish list on Steam.

I’ve finally made several improvements to Titanium Hound demo based on feedback from players. I’m sorry that I couldn’t address all the feedback in this small update - some things require more time to be implemented. Here is the list of improvements in version 0.1.2:

You can find links for demo-version downloads in the original post.