Specifically, the timeline fails to rotate the actor more than once. 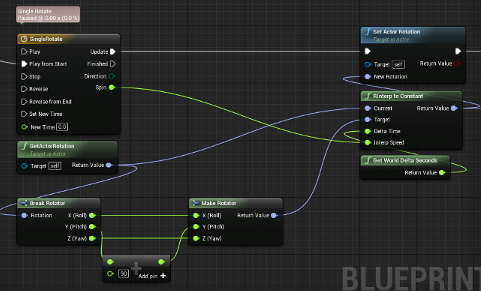 Here’s a look at the nodes. I swear I’ve used a setup like this successfully in the past, but this isn’t working. I want the actor to rotate 90 degrees over a period of 3 seconds every time this function is called, but it only plays once. After that the actor just kind of twitches.

I made a similar post on the forums and thought I solved it, but the problem persists. Either there’s a bug here or I’m out of my depth, missing something obvious. I just want to interpolate between the actor’s current position and an extra 90 degrees, right?

hi, i hope this works for you. 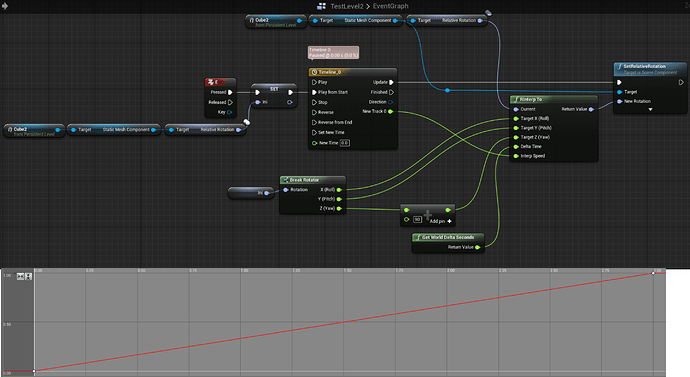 have you tried the exact same BP? this is a cube, set the Mobility to Movable and the eventgraph is made on the level blueprint. on my screen, it rotates and reaches the desired angle on 3s on keypress.

Thanks for the hasty answer. Unfortunately, this didn’t fix anything. The same thing happens – once the actor/mesh reaches 90 degrees, it won’t rotate further. It just twitches.

Hmm… same problem. I made a cube and tied the timeline to a key and everything, but once the cube reaches 90 degrees it just twitches and wobbles. Ideally, the mesh should be able to spin indefinitely.

thats really odd, but if you want it to spin forever, why dont you add a RotatingMovement Component?

Because the actor already has a RotatingMovement component, one with some settings that aren’t compatible with how I want it to spin.

However, you just made me wonder if I could add a second RM component to the actor – and I can. This seems to have solved things.