This Blueprint (self) is not a *Bp-name*-C 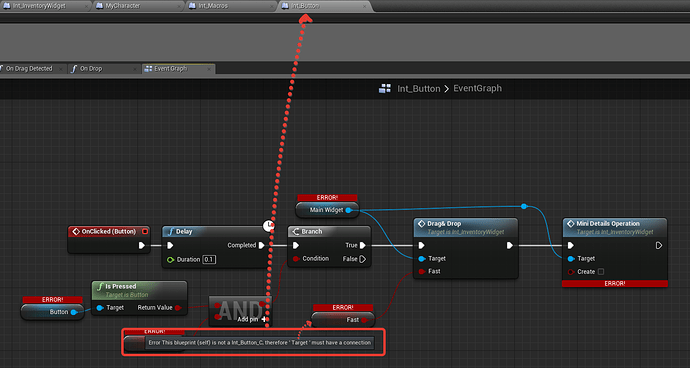 After Compile errors disappear, but every time I open my project, I have to compile some Blueprints in order to make my project work.

Any Ideas how to fix it?

Regarding the Holiday Notice, would you mind posting your UE4 Version, so that the Staff can answer your question faster after the Holidays? (:

I remember that there were(?) a few problems with disconnecting nodes in older version. If you are not using 4.6.X yet, would you mind updating?

Im sorry, im not able to check this anymore, because I’ve updated my project to 4.7 and this error no longer appears. I have some other errors, but that because of me…

Anyway, thank u for response and help!

I know this is a slightly aged thread, but I had this issue with 4.7.6 and I was trying to call functions from another script and they were giving me this error. Tried creating a new function to specify that my character pawn was the target and that wouldn’t allow input to the node in the function. So I deleted the problem nodes and replaced them with copies and the compile worked! Not sure what caused that but thanks to Adam for that reply, it seemed to work!

I actually migrated JCInventory into my project so I guess the migration of the project was what messed it up.