Thinking of downgrading to UE3, but I have some questions.

Since I’m mostly going for a retro look anyway (early 3D is all I can pull off), I probably shouldn’t use an engine that compiles to a format only high-end computer users can use. I assume UE3 has everything I want on it anyway.

But some questions…
1.) Does the UE4 license apply to UE3? I want to exchange donations for cheat codes to be used in my games
2.) Are there any tutorials and APIs archived anywhere?
3.) When I make my first real game, is it still okay to share it on this forum?

I’m probably not the best person to speak on this as I’ve never really used UE3. However, it is more than likely now being less supported than UE4, and UE4 will probably give a lot more possibilites going forward? All the documentation and resources are on the forums and answer Hub here as easy access to any issues you come across.

Also, while UE4 does have some amazing graphics and can really push high end systems, you are able to drop your settings right down for your game for them to run on the lower spec machines.

I probably shouldn’t use an engine that compiles to a format only high-end computer users can use.

That is not true at all. UE4 games run well on older PCs but it always depends on your project. One of my UE4 2D projects runs on a 7year old setup.

So theres no real reason to downgrade to UE3!

UE4 is definitely scales better to lower end hardware than UE3 ever did. Here’s a UE4 game running on a Intel GPU at 60 FPS. 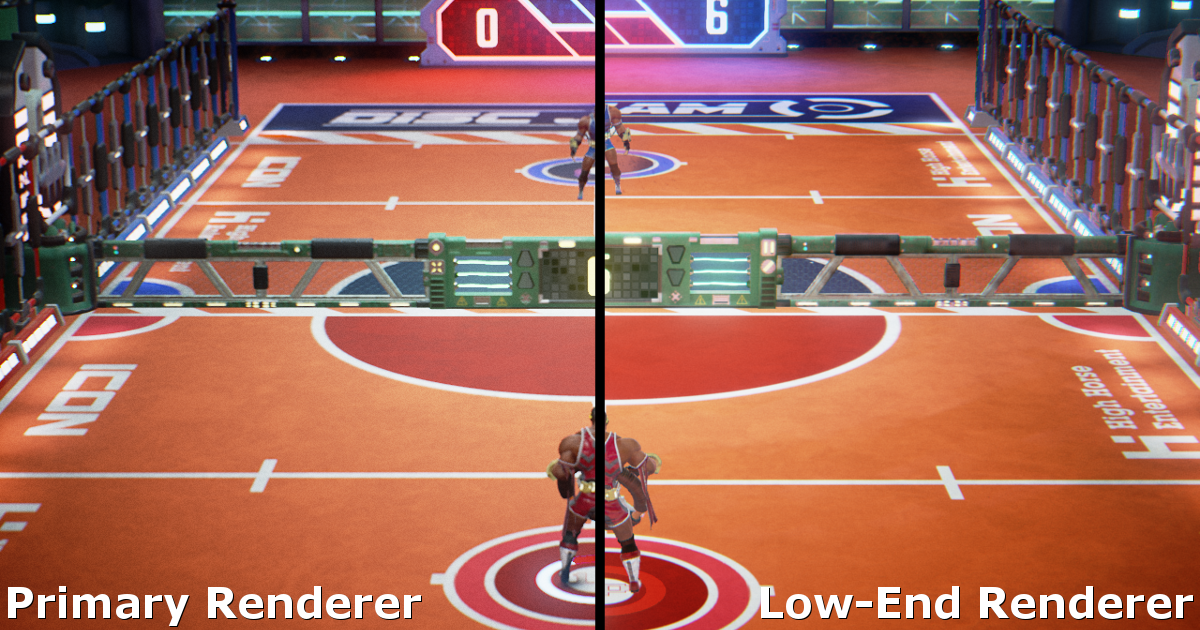 Hi everyone! I’m Jay from High Horse Entertainment, a two-man team based out of Los Angeles. Our first project, Disc Jam, is an arcade action sport in which timing and reflexes are critical to succes, so maintaining a high frame rate is largely...

It’s a bit dated as a guide since it was back when UE4 only had a deferred render for the desktop. There’s still a lot of mobile and very performant example content like Zen Garden if you want to test out UE4 more.

First off–if you want to use UE3 you would have to get special licensing from Epic, it uses several third-party technologies in it (which is why UE4 was created so they could remove those) and it has a much higher licensing cost due to things like that.
That being said, it’s probably not available for licensing anymore, I don’t know of any new licenses for UE3 for quite some time now, there’s some developers still using it but it’s a case where they were using it before UE4 was available and it would take too much time for them to switch, and usually they’ve implemented many of the improvements that UE4 has into their projects. (like Injustice 2 or Batman Arkham Knight)
In any case, most gaming hardware can run UE4, so you shouldn’t be concerned about people with low-end hardware not being able to play your game.

I don’t think its as Black and White as the others make it seem, not for UDK which I use.

A lot has to do with a dev’s skills. If in doubt, look at CobaltUDK / Coldscooter projects!
Plus UE3 has been licensed in recent years. The price varies

UDK Pros:
Editor runs on Win32, UE4 Editor doesn’t (many 7-10 year old PCs stuck on Win32).
UE4’s minimum spec is around GTX-670m, whereas UDK runs like a beast on that!
Bugs are mostly all known by now. Its very stable, hardly any crashes or they’re rare!
Simpler to learn. Kismet is far simpler than BP, same goes for Unrealscript vs C++!
Its friendly as a modder engine: Lots of Vehicles / Weapons / Characters to Mod etc.
Simpler Asset-Management and smaller project footprints because its older system.
Kismet supports Get & Modify-Property to tweak Unrealscript, great for prototyping!

UDK Cons:
No updates / fixes. So any roadblocks, you must find your own workarounds or bust.
No source, and Kismet is often obfuscated along with a lot of key Unrealscript etc!
While simpler to learn, Kismet is too simple and Unrealscript too limited w/o source!
Often slated as being FPS only (but RPG / RTS / Space-shooters are common also).

UE4 Pros:
Source… If you or your team have the C++ chops, then literally anything is possible.
Looks beautiful. Everything across the board is a notch or two better looking in UE4.
All the editors are well designed and they’re getting better all the time if you’re patient.
Geared to a vastly increased number of ‘gametype possibilities’ than UDK / UE3 etc.

UE4 Cons:
Complexity: Its a tough beast to tame. Maybe 2/3 times harder then UDK & 4/5 Unity.
Source control is pretty much mandatory and overall file / project sizes are far higher.
BP is easy, but its also limited and draws on OOP, so parts may confuse non-coders.
C++ is considered easier than vanilla C++ but requires use of outside tools unlike uc!
UE4 min spec is about GTX-670m, this is bare minimum for Editor & Design anyway.
Lots of change all of the time, every version. So stability / predictability can be tricky.
For modders? … Not a lot of Vehicles / Weapons / Characters to Mod out of the box.
Some devs are extremely unhappy with the Physics system especially for car games.
Updates, fixes, PR’s are backlogged. AH support posts go unanswered. UDN is key!
Missing killer features: Large-Worlds / Spherical-Runtime terrain / Better Landscapes.
No Kismet Get & Modify-Property equiv for tweaking C++ source, full C++ or nothing!

Sure, give it a shot dude. It took me about 6 months to become reasonably productive in UDK.
Whereas it took me 1.5 years to get up to minimal speed in UE4, knowing only half the editors!
Either way, there’s plenty of overlap. This isn’t like switching engine from Unity or LumberYard.

One big difference though is Kismet vs. Blueprints–you can’t code C++ in UDK and Kismet isn’t as flexible as Blueprints.

Imo downgrade to ue3 is bad idea, its like downgrade win10 to win2000…
If you plan to release only 1 game then ok, but if you looking forward for gamedev career, theres no reason to develop with ue3…

One big difference though is Kismet vs. Blueprints–you can’t code C++ in UDK and Kismet isn’t as flexible as Blueprints.

Sure, you can’t code C++ in UDK, and you don’t have access to source without UE3.

Kismet flexibility- you can modify uc-script using Get / Modify Property, a slick feature for gently getting familiar with source.

Every day you see new posts by devs baffled by Casting & Blueprint-comms and wondering where Global Variables are?
You can argue that its in everyone’s best-interests longer-term. But it makes Blueprints harder to use initially / puts devs off.
Plus, even when casting and basic-game-structure is understood, there’s still Event Dispatchers / Interfaces to conquer etc.
Everything is pros / cons… I value BP… But I’d prefer if it was closer in capability to C++ to justify the extra learning involved.

Imo downgrade to ue3 is bad idea, its like downgrade win10 to win2000…
If you plan to release only 1 game then ok, but if you looking forward for gamedev career, theres no reason to develop with ue3…

But its always good to look back at what parts of a engine worked well, and what you can still learn from.
Only recently did Epic decide to add UDK’s ability to disable nodes / code-branches into Blueprints etc.

In Kismet, you could drag multiple execution lines, it made the code less cluttered than Sequence nodes.
Kismet let users drag PINS and re-order them on nodes, which also meant having far less crossed wires.
It had ‘variant’ object-data types, which freed developers up from having to deal with strict data-typing etc.
A delay option on every node (exec-pin) etc, and Log / PrintString with multiple inputs is badly missed too!
Kismet also let users hide Node PINS not being used on a per-Node-basis not a global or project setting!
Copying a Kismet node duplicated all the wires-connections too, this made it easier to clone a section etc.

Also if learning an easier engine gives you your start in gaming then that’s better than giving up with UE4.
Most of the basic level design is similar between the 2 engines, its not like switching from other engines.

I know I’m not going to win many over here, but having a 2nd & simpler engine option is fine in my book…

UDK is good as a prototyping engine, and a stepping stone into gaming. Whereas UE4 is the real deal!
Plus I stand by the numbers above… Overall I believe UE4 is more difficult than UDK, by a factor of 2 or 3…

This game was made with UE4 https://youtu.be/NrcW0Cl_vAQ

You can easily make retro style graphics and increase performance. The only thing really lacking is a proper level editor. With plugins like Hammuer though you can always map with Quake based editors and import them into ue4

This game was made with UE4 https://youtu.be/NrcW0Cl_vAQ

You can easily make retro style graphics and increase performance. The only thing really lacking is a proper level editor. With plugins like Hammuer though you can always map with Quake based editors and import them into ue4

Without plugins, what can I do to increase performance? I tried UDK and an hour into it, I couldn’t shake the thought that I’m wasting my time. Even IF I get it to work, I eventually want to build to Gear VR and I’m tired of Unity for 3D games. My sister gave me her old samsung phone exactly for that purpose.
Until I get there, what I’d like to target is computers that WERE great in 2009, but suck now. This is an issue I’d like to know the answer to right away. And as soon as I find a stable version that has a C++ Gear VR template, gonna stick to that one for a while. Most things I can figure out by experimentation, but this I’d like to hear from the experts.

Mostly all I can think of is using Direct X 10 instead of 11 (no idea what to use as far as open GL) and compile to 32-bit.
EDIT: Also, wouldn’t the built-in UE4 level editor still work for retro games as long as I keep it low-poly and don’t use complex materials with stuff like normal maps?